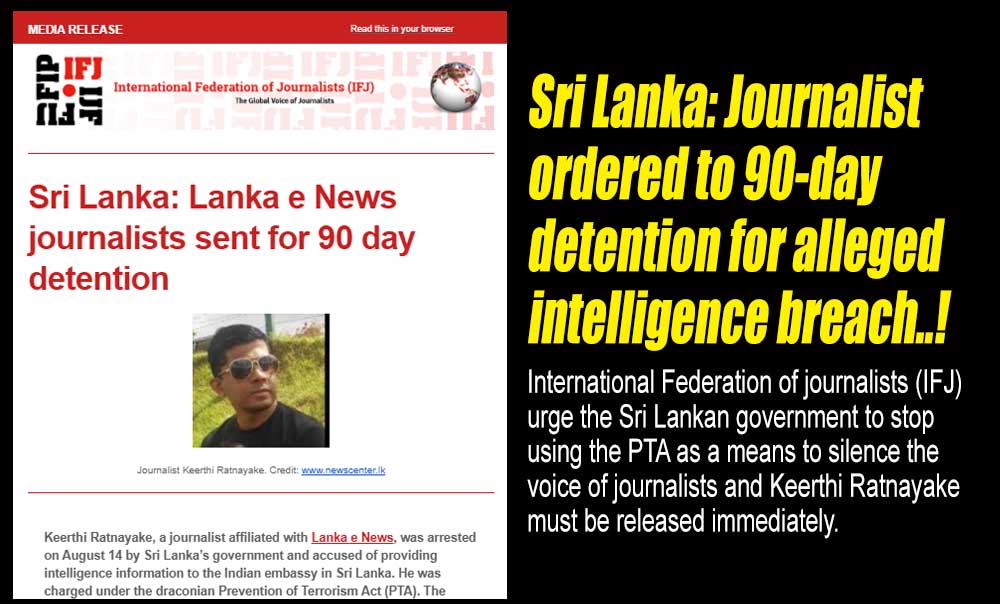 (Lanka-e-News -26.Aug.2021, 9.05PM) Keerthi Ratnayake, a journalist affiliated with Lanka e News, was arrested on August 14 by Sri Lanka’s government and accused of providing intelligence information to the Indian embassy in Sri Lanka. He was charged under the draconian Prevention of Terrorism Act (PTA). The International Federation of journalists (IFJ) and its Sri Lankan affiliates, the Free Media Movement (FMM), the Federation of Media Employees Trade Union (FMETU) and the Sri Lanka Working Journalists Association (SLWJA) urge the authorities to immediately release Ratnayake.

Police from the Colombo Crime Division (CCD) handcuffed Keerthi Ratnayake on August 14. Following his arrest, Ratnayake was asked to lead police to his home. The CCD team then raided his home, seized his personal laptop, mobile phone and other devices. He was not allowed to talk with family members or consult with lawyers.

Ratnayake was then taken to the CCD headquarters in Dematagoda, where he was kept until August 19 and  handed over to the Colombo Criminal Investigation Department (CID) for investigation, extending his detention order to 90 days. Further, the CID police is reported to have raided the house of a friend of Ratnayake and their some of their computers.

Keerthi Ratnayake, who had predicted the assassination of drug kingpin Makandure Madush just few days before he was killed, informed authorities that the Indian Embassy in Colombo was at risk of attack from Taliban extremists working with the Chinese government in Sri Lanka.

The Media Organizations Collective, which includes the IFJ’s three affiliate unions in Sri Lanka, the Free Media Movement (FMM), the Federation of Media Employees Trade Union (FMETU) and the Sri Lanka Working Journalists Association (SLWJA) strongly condemn the incident and urged the government to guarantee law and order during detention while ensuring the safety of journalists in custody.

In a letter written to the Inspector General of Police, Chandana D. Wickramaratne, the Media Organizations Collective said, “We urge that the investigations be done under the proper regulations, as his editors have informed us that the Police are currently questioning him about unrelated details – those about the news website. We would like to remind that journalists have a responsibility to not reveal their sources, and only reveal what is necessary for legal proceedings.”

The IFJ said: “The IFJ notes that the Sri Lankan government is employing different means to harass journalists, invoking dubious terrorism charges under the problematic PTA. We urge the Sri Lankan government to stop using the PTA as a means to silence the voice of journalists and ensure that those taken into custody are released safely. Keerthi Ratnayake must be released immediately.”