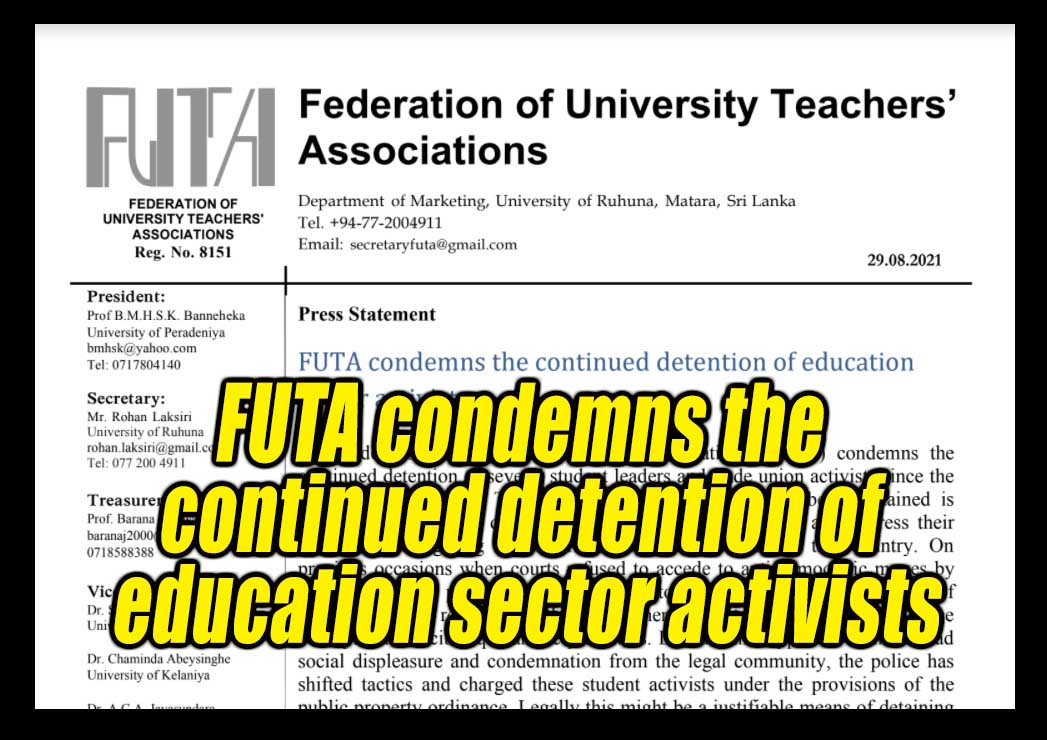 (Lanka-e-News -30.Aug.2021, 9.30PM) The Federation of University Teachers Associations (FUTA) condemns the continued detention of several student leaders and trade union activists since the first week of August. The only reason these activists are being detained is because they dared to defy this anti-democratic government and express their dissent while fighting for the future of free education in this country. On previous occasions when courts refused to accede to anti-democratic moves by the police to ban protests and granted bail to those arrested under the guise of violating health regulations, the government and its mercenary police force attempted to forcibly quarantine protestors. Because this approach earned broad social displeasure and condemnation from the legal community, the police has shifted tactics and charged these student activists under the provisions of the public property ordinance. Legally this might be a justifiable means of detaining these activists. But if we look at the broader context in which they are being detained, it is an act of political vindictiveness. There is no moral justification for the detention of these activists – all they did was protest and exercise their democratic right to dissent.

Furthermore, at this point in time three of them have tested positive for COVID 19. Since the PCR tests conducted at the time of their arbitrary arrest were all negative, it is clear that they contracted COVID while in remand custody, when considering the 3-week time frame between their arrests and being tested positive with the second PCR test. We would like to remind the government that these are university students and trade union activists, and not common criminals or terrorists. If any of them develop complications due to COVID 19 the onus is on the government. It is the beholden duty of a democratic state to look after the welfare of those in its custody. Therefore, we demand that the government immediately provide them the necessary treatment and ensure their health and also withdraw all fabricated charges against them. If the government fails to act responsibly at this moment, we would like to observe that this is no longer a democratic government but similar to a petulant schoolground bully or a common street thug who tries to exact petty revenge from those who stand up against its arbitrary conduct.