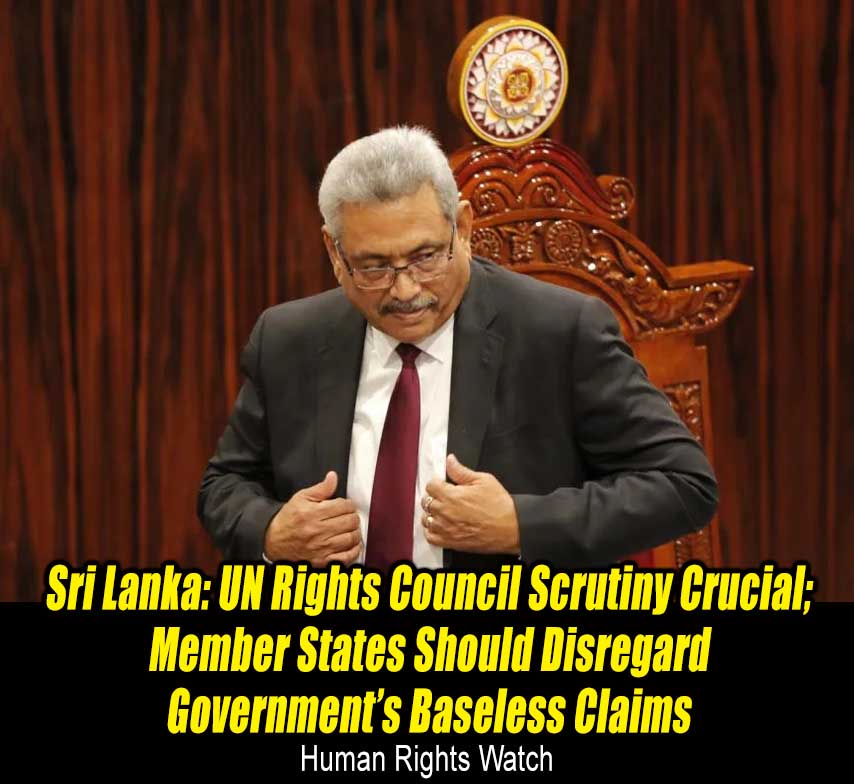 At the Council’s upcoming session, which begins on September 13, 2021, UN member countries should express their alarm about the ongoing abuses by the government of President Gotabaya Rajapaksa and the weakening of independent governmental institutions, civilian governance, and the rule of law. These countries should demonstrate their willingness to press the Sri Lankan government to meet its international human rights obligations.

“Since Gotabaya Rajapaksa took office in 2019, the limited progress Sri Lanka had made in addressing past atrocities and ending abuses has been disastrously reversed,” said Meenakshi Ganguly, South Asia director at Human Rights Watch. “Continued international attention and pressure can help reduce the risks faced by minority communities, activists, and journalists, who live in heightened fear of the authorities.”

The administration is using its security and intelligence agencies to surveil and intimidate the families of abuse victims and others who are seeking to uphold human rights. “When we talk to the families of the ‘disappeared,’ they say they can be arrested at any time,” a human rights defender in northern Sri Lanka told Human Rights Watch. “That they can arrest you for anything.”

The authorities are using arrests and threats issued under the draconian Prevention of Terrorism Act (PTA) to silence calls for justice in the Tamil majority north and east, and to arbitrarily detain Muslims in counterterrorism operations. In August, Inspector General of Police C.D. Wickramaratne said that 311 people are in custody for the deadly 2019 Easter bombings, many of them for over two years. However, no one has yet been brought to trial in connection with the attacks.

President Rajapaksa issued an ordinance under the PTA this year that allows for two years in detention without trial for the “rehabilitation” of people accused of causing “disharmony,” and another that creates a new PTA detention center at a notorious police facility in Colombo that would permit even more abuse under the terrorism law. These actions contradict the government’s claim to foreign diplomats that it was preparing to reform the PTA, which has been used to facilitate the arbitrary detention and torture of prisoners since its introduction in 1979.

Under the PTA, a prisoner can be held for up to 18 months without being produced in court. A newly formed “advisory board” of three presidential appointees to review pretrial detention orders under this law offers no credible legal protection against abuses, Human Rights Watch said.

The police Terrorism Investigation Division (TID) has been used to stifle civil society. “They regularly visit the NGOs (nongovernmental organizations) and talk about the financial reports and staff lists and phone numbers,” an activist in the east, who described the visits as a method of surveillance and intimidation, told Human Rights Watch. “The TID visits NGOs regularly. It’s kind of routine.”

An amendment to the constitution in 2020 undermined the independence of the judiciary by empowering the president to appoint senior judges. The amendment also undercut the independence of the Human Rights Commission of Sri Lanka, the status of which is now under review by the Global Alliance of National Human Rights Institutions. Recent appointments to the Office of Missing Persons, which is supposed to discover what happened to thousands of victims of enforced disappearance over several decades, have further undermined its credibility. The appointees include a former Inspector General of Police accused of destroying evidence in the murder of a journalist.

A presidential commission established in January 2020 to examine supposed cases of “political victimization” has recommended halting investigations or prosecutions in the few cases of serious abuses where there had been limited progress, and instead opening investigations against police investigators for allegedly falsifying evidence.

In August 2021, the Attorney General dropped charges against a former commander of the Navy implicated in the enforced disappearance of 11 men and boys between 2008 and 2009. Senior Superintendent of Police Shani Abeysekera, who led that and other major human rights investigations, received death threats and was imprisoned for a year and half, until the Court of Appeal found that the case against him was “fabricated.”

Meanwhile, the government has sought to persuade diplomats at the Human Rights Council that an accountability process still exists, by referring to a separate presidential commission established by President Rajapaksa in January with a mandate to reexamine the reports of the numerous previous domestic commissions “to ascertain whether there have been violations of international human rights law and international humanitarian law,” and whether previous recommendations had been implemented.

On August 31, the Sri Lankan Foreign Ministry circulated a document to foreign diplomats in which the government claims, without basis, to have made “continued and tangible progress … in addressing issues related to achieving peace, reconciliation, and development, including accountability, within the domestic legal framework of Sri Lanka.”

In fact, the government’s approach has been to emphasize “compensation” to victims over justice and accountability, as Justice Minister Ali Sabry said at an event organized by the Office of Missing Persons on August 31. The Foreign Ministry claims that these payments – about US$500 each in cases in which the victim died – will help bring “closure” and “reconciliation.”

Far from promoting reconciliation, the government has repeatedly adopted policies that alienate Sri Lanka’s beleaguered minority communities. Tamils and Muslims in the north and east have complained of a concerted government policy to seize land belonging to members of their communities on various pretexts, including by a presidential task force on archaeology composed of Buddhist monks and members of the security forces.

Foreign governments should take firm and coordinated action to press the Sri Lankan government to reverse course, Human Rights Watch said. The European Union should insist that Sri Lanka complies with its human rights obligations to maintain tariff free market access under GSP+, as should the United Kingdom under its similar program. Donor governments and multilateral agencies, such as the UN Office on Drugs and Crime, should immediately withhold support for Sri Lankan security forces until they take steps to halt and address violations, in compliance with UN due diligence standards.

“No one should be in any doubt that Sri Lanka’s human rights situation is deeply alarming and getting worse,” Ganguly said. “UN member states should recognize that the government is sensitive to international pressure, and make the protection of human rights in Sri Lanka their priority.”