The Emergency Powers Of The President & The Situation Of Women 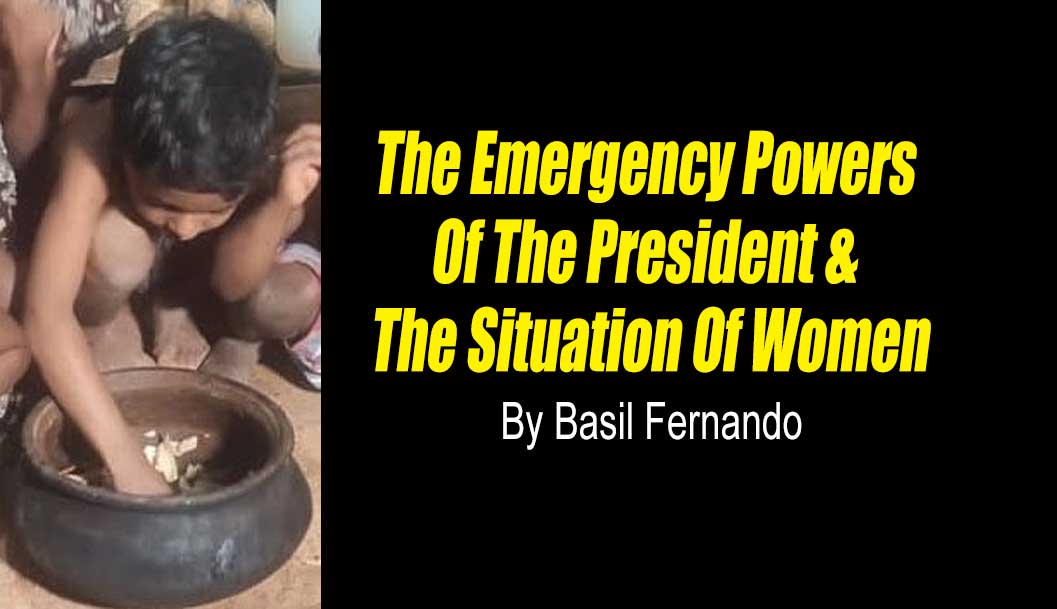 (Lanka-e-News -12.Sep.2021, 3.30AM) While Sri Lanka is faced with many crises, the President has acquired the powers to act under the National Security Law by taking emergency powers into his hands. Will that contribute to Sri Lanka’s ever deepening crises or will the situation aggravate, as all power is taken away from everyone else except the President?

However, the issue depends on how we look at these many crises. The Government seems to look at the economic crisis purely as a Dollar crisis, meaning not having enough Dollars in hand to pay back the foreign loans or for other business purposes like dealing with imports.

However, the average citizen looks at the economic crisis as essentially a crisis of the unavailability of food at affordable prices. For the citizens, it means sacrificing part of his/her meals for himself/herself and also for his/her family. It means less calories to survive with. And it is no longer an unusual occurrence for someone to appear on a television show, telling an interviewer that some days they live only on water.

A recent survey done by a British think tank has ranked Sri Lanka among the first five countries with the least amount of food available for citizens at affordable prices. According to the report, the average Sri Lankan wage earner spends over 66% of what he/she earns on food alone for himself or herself. And with the rest, the families have to be looked after and others need to be attended to. What the report has taken into consideration is only the situation of wage earners who constitute the vast number of people in Sri Lanka who do not get a fix salary. For them, the situation is much worse. Among those who are worse hit are also those who engage in agricultural production. Thus, for all these people, the economic crisis simply means having less to eat.

Then comes the problem of Covid-19. For the entire country and particularly for 65% of the people who are in the lowest levels of economic capacity, Covid-19 simply means a threat to their lives. They cannot afford any of the things that are required to keep social distancing in order to avoid the infection and also to get whatever medical care they need in case they become victims of the Virus. Thus, an economic crisis to them means in terms of health, the inability to afford the basic health care.

To these and many similar problems, the solution that has been proposed and received approval from the Parliament is to empower the President with emergency powers. In essence, emergency powers means the power that is handed over to a single individual and subordinating all others to that power.

The crises require collective efforts. Collective efforts are possible only in an atmosphere within which many people take many initiatives in many different ways. To take initiatives, people should feel that they have a certain amount of power in their own hands with which they could exercise their responsibilities for themselves and their community.

When the power is only in the hands of one person, that person, whoever he/she may be, becomes the most isolated person in that community. This isolation is an unavoidable part of possessing sole power.

It would be a matter of prudence for anyone who deals with the holder of such power to keep great distances in a way so as not to offend the holder of the power by creating any impression that the non holders of that power do also take initiatives and do whatever they think is the right thing to do in order to contribute to resolve the problems which has in fact affected the society as a collective.

Thus, by taking up emergency powers, the President may have gained more power on paper. But, in reality, he has weakened his capacity to lead and to act.

Now, the President has one great enemy to deal with, that is the women of Sri Lanka. It is women who have to manage the budgets of their families with the less availability of food at affordable prices.

Can the President deal with women’s revolts with the use of emergency powers?

If the President uses his powers to impose further sacrifices, which would make people even less capable of affording food, heath care and child care, the President will have to deal with the women’s anger.

Women have seen through the craziness of the system that has created all these problems. They cry out against the colossal mismanagement of the country and the losses created by corruption and carelessness.

The battlefront has shifted from the streets to the homes.