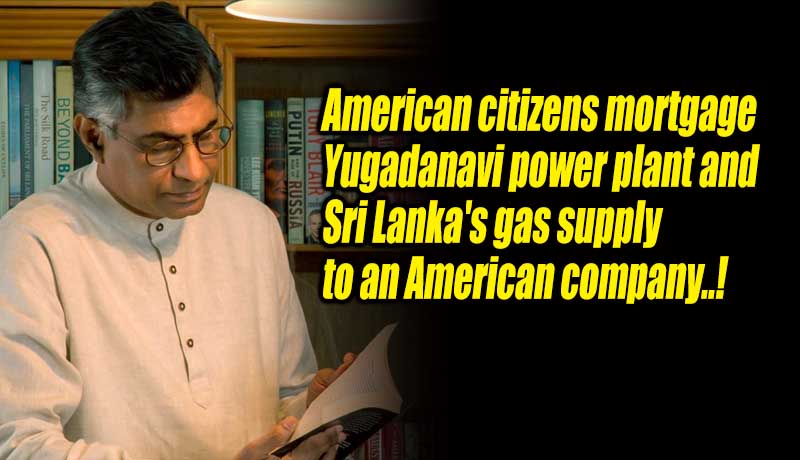 (Lanka-e-News -29.Sep.2021, 11.30PM) We have to stand against the attempts to surrender our autonomy in power and energy sector to the United States of America. Speaking at a press briefing, MP Patali Champika Ranawaka said that the “Yugadanavi” power plant at Kerawalapitiya and the Gass exploration project of Sri Lanka has been handed over to an American Company.

The construction of this power plant which started in 2006 and ended in 2010 was planned for producing 300 Megawatts of electricity with Liquid Petroleum. It has been commissioned for over ten years now and is producing the 300 MW ever since. However, running of liquid petroleum is yet to be established.

Another power plant was planned to be constructed on the adjacent plot of land with similar capacity. After a decade it has still not been constructed. The foundation stones were laid last year and the name of the plant is “Swabhadhanavi”

The transaction was kept under cover...

It is understood that 40% of Governments shares of the “Yugadhanavi” plant was sold to an American company by this government. This transaction was kept under cover. The treasury is set to receive 250 USD in return in the transaction. The funding for this plant was through the Lanka Transformers company, EPF, ETF and the Ministry of Finance. 40% of Governments stake which was based on above funding was sold to the American Company.

There is a very peculiar situation with regards to the payments of this electricity plant. We know there are two types of payments made by the Electricity Board. Payments for the Capital as well as the running costs. However the amount to be repaid as USD  is to be fulfilled by next year. Therefore, from next year, there is no loss of foreign currency from this power plant. Then why we ask? The Government hands over this plant to a foreign company? There will be a huge cost for maintenance and repairs in the next 12 years. We urge the Government to reveal the details of this transaction.

The Asian Development Bank is set to fund for the construction of this new power plant. However, due to the mismanagement of economy by this Government and the downgrading of ratings the said loan is to be received next year. If the Country goes in to bankruptcy before that, the said loan will not be given. Else, the interest will be extremely high.

On this context a 49” stake of the said power plant is to be owned by the said Company. Further, the supply of Natural gasses for this plant for the next five years is to be given to this American company. We have to highlight that such an infrastructure to supply Gas will be extremely costly. Building such infrastructure for just five years is just impractical. It is just another attempt to mislead the public.

If this “agreement” with the said company is to proceed the Gas supply will be handed over to the American Company for the rest of our lives. This secret “deal” is happening at a time where the CEB and the CPC has called for tenders to build a floating Gas supply plant, FSRO . furthermore, tenders are being called for building a pipe line for the Gas supply and for Gas suppliers. The secret “deal” is taking place on the above context.

Even when the procumbent procedure is being initiated to find a supplier in a transparent manner, it is interesting that an American Citizen as the finance minister is proceeding with an Americal Company to secretly hand over the Gas supply to the country.

Where are those patriots who rioted against “American Invasion” on streets of Sri Lanka? The Government is handing over the gas supply of the country to American including two power plants.

The Kelanithissa power plant owned by CEB has many smaller plant inside it. These plants are run with petroleum. But, they could be run with Gas much more economically. With this “deal” 800MW of power generated by the Kelanithissa plant will also be under American control.

We don’t see the transparency that American preach to other countries in this transaction. The Parliament is not informed about this deal. This deal is contradictory to the Constitution of the land.

No power to Minister..

This transaction has breached the procurement procedure of the state. It has breached the constitution of the country. It lacks transparency. This is a violation of what United States of America declares as their policy. We have come to know of this fact only through the medical release by the said company. Our Autonomy in power and energy has been surrendered to USA

We need to unite against this betrayal. All the workers in the CEB, all Engineers in this country and all patriots of this country should come forward to protect our sovereignty and autonomy.