-By a SJB Front Line Member 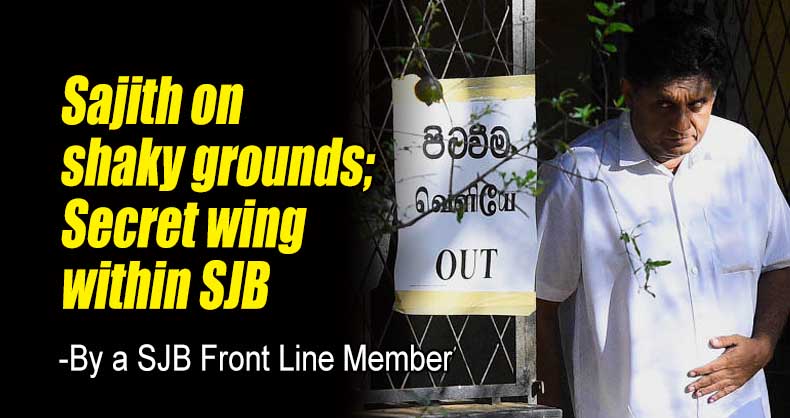 (Lanka-e-News -03.Oct.2021, 9.45PM) In an unusual development, Badulla District Samagi Janabala Wegaya (SJB) Member of Parliament Chaminda Wijesiri openly criticized his leader Sajith Premadasa while speaking to the media recently. Here is the top-secret inside story of these developments.

A source from within the SJB and a close confidante of Sajith Premadsa said that he and several other SJB Members of Parliament and certain professionals who had worked closely with him during the run-up to the last Presidential election, are thoroughly fed-up of Sajith Premadsa’s leadership and further added that though he pretends to be a democratic leader, he is not at all democratic in practice but a dictator.

This quality of Sajith Premadasa had been very well-identified by late MP Mangala Samaraweera. He had identified his immaturity, weaknesses and lack of leadership and had warned Sajith several times to try and guide him on the correct path. However, Sajith Premadsa’s nature is such that he does not listen to anybody. This was one of the main reasons for Mangala not to contest the last General Elections under the SJB, and he never tied up with Sajith either. This close confidant further said that Sajith has already forgotten the professionals like doctors, lawyers, engineers, economists etc. who had worked hard for him during the Presidential Election. He ignores their advice since he assumes that he knows better and that his agenda is perfect. He has already proved in parliament so many times that he is not a leader with a vision.

In fact, frontline leaders of the SJB had reportedly urged Sajith Premadasa one year ago to implement a vision to develop Sri Lanka and design an effective national policy regarding all vital subjects. However, this is still to happen and the frontline leaders lament that Sajith’s vision is only to believe the public, and unfortunately refuses to even discuss about a future vision for the country.

According to sources, there are 23 well known SJB parliamentarians who have secretly formed an alternative group against Sajith and this group receives the support of professionals including President’s Counsels, reputed surgeons, doctors, marketing professionals, academics etc.

They are formulating strong strategies and expect to work against Sajith. A member of this group revealed that at the inception they comprised of only three Members of Parliament and that within a short span of time they have been able to increase their strength to 23 members. Surprisingly, he added that they were among the members who shout the loudest in parliament in favor of Sajith. He further said that they are holding crucial discussions with other political parties to form a broad coalition and that these discussions have been successful so far. Stressing on these developments, the source added that the first round of discussions with Tamil and Muslim parties had been a huge success and that they were attempting to keep further developments a top-secret.

Research, a survey on Sajith’s leadership

There are a couple of business magnates who had supported Sajith during the last Presidential Election who plan to carry out research and or survey on Sajith Premadasa’s leadership qualities. A reputed market research company is expected to carry out this survey very soon and hand over its reports to this alternate group.