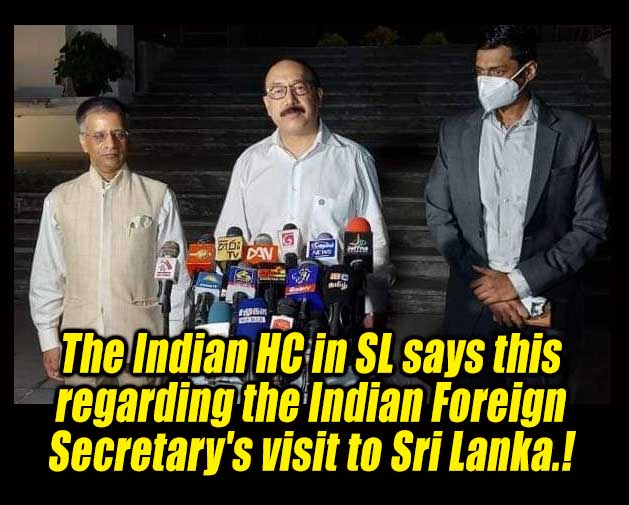 During his meeting with the President on October 05, 2021, Foreign Secretary underscored the importance India attaches to expeditiously taking forward mutually beneficial projects, including proposals to enhance air and sea connectivity between India and Sri Lanka. Foreign Secretary thanked President for his guidance and close cooperation in the defence and security sphere. Further, he reiterated India’s position on complete implementation of the provisions under the 13th Amendment to the Constitution, including devolution of powers and the holding of Provincial Council elections at the earliest.

In his meeting with the Prime Minister held on October 04, 2021, Foreign Secretary mentioned that India-Sri Lanka relations are underpinned by vibrant people-to-people ties which would be further strengthened with signing of the Inter-Governmental MoU for the USD 15 million Buddhism grant. Recalling India’s strong cultural & civilizational links with Jaffna, Foreign Secretary informed that India would extend support to the Government of Sri Lanka for the maintenance of the Jaffna Cultural Centre built with Indian grant assistance. Foreign Secretary further mentioned that the Government of India looked forward to welcoming the inaugural flight from Sri Lanka to Kushinagar which would further bolster cultural links between the two countries.

The meeting with the Minister of Finance focussed on the strong economic & commercial relations between India and Sri Lanka. In this connection, both sides agreed to make progress on joint projects, including those under the loan & grant assistance extended by GoI. Foreign Secretary held wide-ranging and comprehensive discussions with the Minister of Foreign Affairs and the Foreign Secretary on all areas of mutual interest, including on the need to face the challenges posed by the Covid-19 pandemic together to mitigate its economic impact.

During the visit, Foreign Secretary travelled to Kandy, Trincomalee and Jaffna, signifying their cultural, economic and historical importance, respectively. In Kandy, Foreign Secretary offered prayers at Sri Dalada Maligawa. In Trincomalee, Foreign Secretary visited the Oil Tank Farms, a symbol of the potential and strong energy partnership between India & Sri Lanka where LIOC briefed him about the development undertaken by it at the Lower Tank Farms and its advantages to Sri Lanka’s economy. During his visit to Jaffna, Foreign Secretary inspected the Jaffna Cultural Centre and interacted with the Governor of Northern Province, several Members of Parliament, academicians and business leaders.

Expressing his happiness at the joint inauguration, Foreign Secretary underlined that completion and handing over of the new housing and educational infrastructure is in line with the abiding commitment of the Government of India to assist Sri Lanka in its socio-economic development. These projects also reflected the people-centric nature and range of India’s development partnership with Sri Lanka.

Continuing the commemoration of 152nd birth anniversary of Mahatma Gandhi which fell on October 02, 2021 and the ‘Azadi ka Amrit Mohotsav’, Foreign Secretary Shri Shringla, Minister of Foreign Affairs, Minister of Fisheries and State Minister of Estate Housing & Community garlanded the bust of Gandhiji placed at Temple Trees, recalling his message of peace and non-violence.

The extensive and warm discussions held during Foreign Secretary’s meetings with all interlocutors and the joint inauguration of development cooperation projects will impart further impetus to the close, friendly and mutually beneficial ties between India and Sri Lanka.