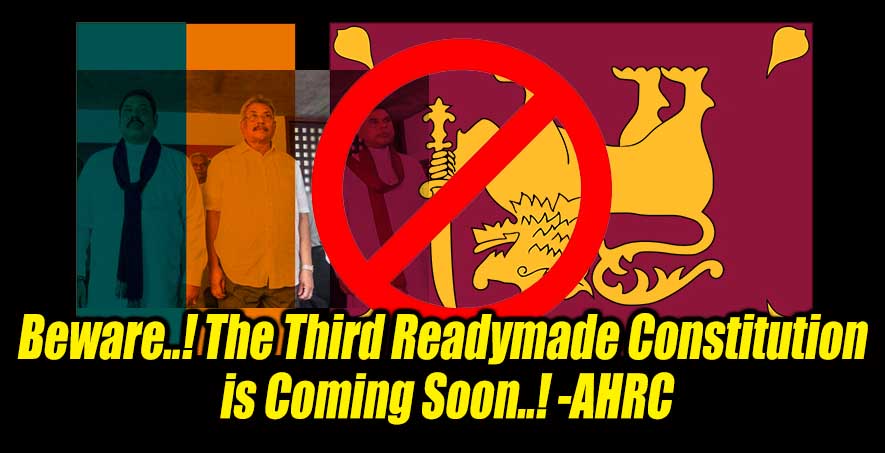 (Lanka-e-News -23.Oct.2021, 1.10 PM) Professor G.L. Peiris has announced that the drafting process of the Constitution is over and that the text is ready. He said that it was to be presented to the Parliament in January next year. President Gotabaya Rajapaksa, in a televised speech, referred to the Constitution being drafted within the course of next year.

People need to intervene now to stop this Readymade Constitution..

The proposed process will have a disastrous effect on the State, all public institutions including the public financial institutions and the entire fabric of society in the future. This Constitution that is envisaged will not only bind the present generation but it will have an enormously adverse impact on future generations.

The people need to intervene to stop this proposed process and insist on their rights as citizens to participate in the process in order to bring into the Constitution matters that they think are of vital importance to their nation and all citizens for whom the Constitution provides protection and functioning in the future.

Constitutions are not made for the enslavement of the people and to trap them under various kinds of designs and formulas by which, things that are harmful to the nation and to the people can be achieved. The struggle against the proposed process should be a struggle to prevent serious future harm to the nation.

Constitutions are not made as some kind of abstract document that can be designed by Constitutional pundits. There are a few people who have designs for how to exploit national resources for their own benefits and not for the benefit of the nation. Constitutions are made to address the most pressing problems of the times so that a legal framework will be developed where the future relationship within the nation could take place for the benefit of all people. For this reason, everyone has a right to their say in the making of their Constitutions.

By now, twice, people have been cheated in the process of the making of the Constitution of Sri Lanka. First was in 1972 when a Constitution was promulgated that undermined the independence of all public institutions in favour of politicians directly running the basic institutions of the country. That Constitution also started the process of undermining the independence of the judiciary. The second most disastrous was the 1978 Constitution that has been condemned by everybody including by the leading politicians who came to power at different times but which became a noose around the neck of the people who wanted to participate in political and social processes for the well-being of everybody. All the present disasters that are faced by the nation can be traced to these two Constitutions.

It was unfortunate that these two Constitutions were passed without strong resistance from the people. Perhaps the people did not yet understand what kind of political, economic and social disasters could be brought about by Constitutional processes that undermine the rights of the people rather than enhancing their rights. The present situation provides an opportunity for interventions in order for people to ensure that what they want is included in the Constitution.

What would the people want to include in the Constitution? In fact, this can be easily identified in terms of the disasters that the country is faced with now, which can be prevented through proper legal frameworks in the future. Some of these major problems are follows.

Prevent the abuse of national finances..

A proper process of dealing with national finance should be incorporated into the Constitution so that the kind of economic malevolence that now exists will not be repeated. The United States Dollar crisis clearly shows that there were no adequate Constitutional safeguards for the seeking of loans and also for monitoring funds obtained through the loans. Regulating the loans received and processed is an essential element for the protection the nation and also of younger generations. The provisions that have been made so far in the existing Constitution have proved inadequate to create the necessary facilities and limitations for the proper functioning of national institutions that are dealing with the control of finances in the country.

Constitutions should provide a necessary framework for creating a functional corruption control mechanism. The existing laws as well as enforcement have proved enormously disadvantageous to the nation. Corruption is more rampant than ever before. Mere assurances given by the President or anyone else will not change the situation. There should be a Constitutional means to ensure the development of a functioning system that could bring the stability that is required to attract investments and safeguard the interests of the nation.

The Constitution must clearly provide a process to control international agreements that have been made in order to facilitate a healthy environment for foreign investments. The process of the making of agreements should be transparent to the extent that the people could intervene to prevent obtaining of commissions and other illegal transactions. Above all, the Constitution must ensure that nothing threatening the sovereignty and the territorial integrity of the nation could be brought about by entering into agreements that will have long term consequences to the sovereignty of the nation.

Ensure the protection of national resources..

The protection of Sri Lanka’s national resources and the environment should find a clear provision within the Constitution so that the new laws and the law enforcement systems can be developed to ensure such protection. For example, there is a threat to the control of the sea around Sri Lanka. Fishermen are threatened by the intrusion of others who steal local fishing resources. Similarly, the environment is threatened throughout the country by the improper allocation of land, purportedly for development purposes but that is creating environmental disasters everywhere including in water resources. All problems associated with the protection of resources and the environment should receive priority with an overarching framework of proper regulation.

Protect agriculture and the people’s ownership of land..

One of the most urgent issues that people are faced with is the agricultural environment. The authorities including the Government should be prevented from taking ad hoc decisions that bring about untold misery to the lives of the people including the breakdown of the agricultural sector, which has already led to widespread malnutrition and which could lead to starvation. The problems of the farmers and the improvement of their livelihood and stability within the framework of the law should be the basis of the modernisation of agriculture as well as the introduction of new technologies into the agricultural sector. If these are done without the proper legal protection mechanism, it will affect not only the farmers but also the nation. Associated with regulating the agricultural sector is the control of the monopolies that take undue advantage of produce. The supreme law of the country should have provisions to provide a proper regulatory system within which competing parties could take part within an acceptable framework to share the benefits of the agricultural products and the sales.

A Constitution must provide an overarching legal framework within which national policies could be developed covering issues relating to exports and imports and other matters of commerce so that arbitrary exploitation could be prevented. And this cannot be done purely through the existing commercial laws.

Ensure the creation of a functional system of the administration of justice..

Above all, a country requires a functional system of the administration of justice. There is acknowledgement that the existing framework has been purposefully undermined in order to make unprincipled forms of exploitation possible. The country’s criminal justice system is at its lowest ebb now. In a similar way, the country’s prosecution system has suffered severe setbacks and lost the confidence of the people. The judicial role, judicial function and judicial independence have been undermined. These matters have not been dealt with adequately in the Constitution. Therefore, the Constitution making process taking place now should pave the way to tackle them.

In terms of media freedom, the situation is dangerously lacking, reflecting the existing Constitutional provisions for the protection of the freedom of expression, association or assembly. The Constitution must deliberately address the methods by which the wrongs done in previous times could be prevented from recurring. The killing of journalists and having no inquiries remain as well as other forms of abuse such breaking of legs and harassment. The Constitution must therefore provide for ways to prevent these situations.

Holding politicians accountable is one of the major themes that people are constantly discussing. Thus, if the people have a say in the making of a Constitution, they would want to see that this is addressed properly within the framework of the Constitution. The possibility of corruption by politicians requires a preventive mechanism so the principles that should be followed must be articulated in a clear framework within the Constitution.

Prevent the fusion of civilian and military functions..

The protection for Sri Lankans employed overseas through recognition in the articulating of the principles of protection for the people means that such a framework should provide for the institutional protection of these workers.
Treatment of Minorities

Of paramount importance is the manner in which the issues of minorities are dealt with within the framework of the Constitution so all people live in harmony as equal citizens, enjoying equal rights and equal protections, while at the same time enjoying the recognition of their differences within the framework of a democratic State. It is not enough to say these things as generalisations but a proper legal framework should be articulated.

The people need to intervene now to stop the Government from proceeding with the passing of the proposed readymade Constitution. They must demand the right to participate in making a Constitution that they can call their own.