Sri Lanka is taking a turn for the worse: The international community needs to recalibrate its engagement strategies -GTF 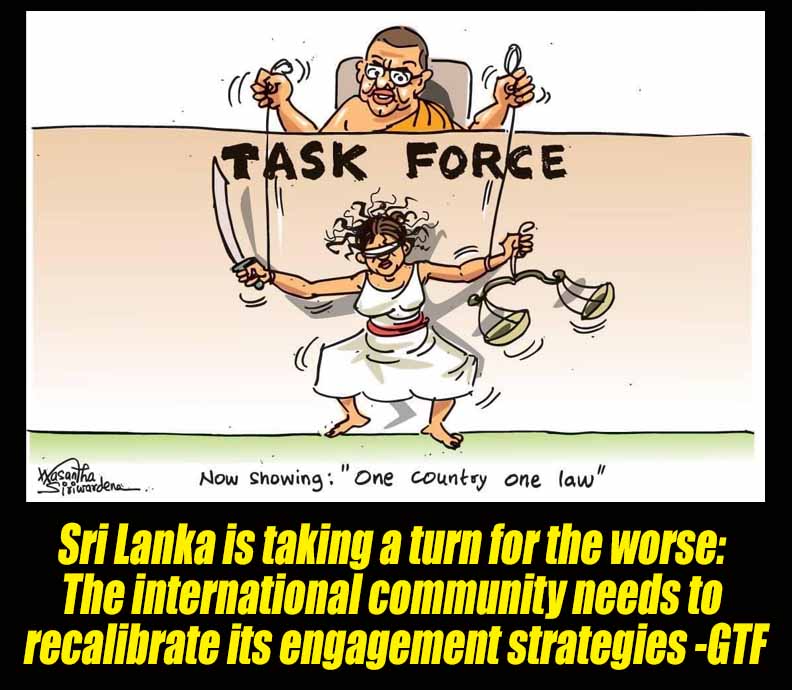 (Lanka-e-News -02.Nov.2021, 10.15AM)  The recent appointment by President Gotabaya Rajapaksa of a Presidential Task Force for ‘One Country, One Law’ under the leadership of Ven. Galagoda Aththe Gnanasara Thero is a deeply worrying development. The task force has a few handpicked Muslim representatives but without Tamil representation and was formed without consultations with minority community representatives. It is a clear illustration of Sri Lanka’s twin failures – lack of respect for pluralism and rule of law, and entrenched immunity from prosecution – the hallmarks of the present administration.

Under President Gotabaya Rajapaksa, Sri Lanka is increasingly ruled through Presidential Task Forces sidestepping the traditional democratic mechanisms of governance. The Buddhist-monk headed Task Force has been asked to study the ‘One Country, One Law’ concept and to prepare a draft Act for its implementation.

The ‘One Country, One Law’ was used as a successful election slogan in 2019 by Gotabaya Rajapaksa to rally Sinhala Buddhist voters by calculatingly tapping into their groundless fears of the minority communities. In 2020, the same fallacious argument was invoked by the government to justify its stand on mandatory-cremation of Covid-19 victims, thus denying the faith-based burial rites of the Muslim and Christian minorities. This slogan (despite its veneer of rationality) represents an ultra-Buddhist nationalist attempt to homogenise the country’s multi-ethnic, multi-religious, multi-cultural landscape by progressively eliminating the uniqueness and specialities of its different communities.

Most divisive and notorious person..

The person who has been chosen for this job by President Rajapaksa removes any ambiguities about the aims of the Task Force. Ven. Galagoda Aththe Gnanasara Thero, the head of the extremist Bodu Bala Sena (‘Buddhist Power Force’), is one of the most divisive and notorious persons in the country. His open espousal of racism and incitement against the Muslim community is well known in Sri Lanka and in many other countries. The Thero who was previously convicted by the Courts for different crimes, including for threatening the wife of a forcibly disappeared journalist, and contempt of court, was granted Presidential Pardon in May 2019 within a year of serving his six-year jail term.

Presidential pardons of convicted persons, withdrawing credible cases against those connected to the regime and, appointing pardoned criminals to important government positions have become the modus operandi in Sri Lanka. Sergeant Ratnayake, sentenced to death for multiple murders of Tamils during the war after a 13-year trial, was pardoned (March 2020) within five years of serving his sentence. Former Parliamentarian Duminda Silva, sentenced to death for the murder of another former Parliamentarian, was pardoned (June 2021) within five years of sentencing, and within weeks appointed as the Chairman of the Housing Authority. Just two weeks ago, Sri Lankan authorities dropped charges against former Navy Commander Admiral Wasantha Karannagoda, who was indicted in 2019 for the killings of eleven mostly Tamil teenage children after extorting money during war times (a case the United Nations Human Rights Council (UNHRC) considers as an illustrative example for Sri Lanka’s failed justice system).

The ‘One Country, One Law’ initiative has opened another urgent and ominous front on ethnic relations in the country. The President’s recent pronouncements about creating a new constitution next year and this initiative under an extremist Buddhist monk are highly worrying developments for the minority communities. Many people suspect that in the name of homogenising the legal system – the regional power devolution arrangements could also be diluted or abolished – in addition to weakening the existing traditional laws and customs pertaining to different communities.

It is feared the present government that has so spectacularly failed in every aspect of governance and economic development, will resort to majoritarian extremism, and foster ethnic hatreds to sustain a degree of its original support base – a time tested strategy in Sri Lankan politics. Such steps will undoubtedly be the death knell for reconciliation and has the potential to set off resentments and conflicts in the future.

In the present climate of entrenched impunity and severely weakened rule of law, the Tamil community has not an iota of hope or expectation that any form of justice is possible via Sri Lanka’s internal mechanisms. The Global Tamil Forum (GTF) is calling upon the international community to recognise this fact and redouble its efforts, including through effective bilateral measures, to promote accountability and reconciliation in Sri Lanka. In this context, the GTF welcomes the recent launch of the OHCHR Sri Lanka Accountability Project (2021) and call upon the international community to ensure that the project is supported with all necessary resources.

Importantly, it is crucial that – irrespective of their ethnic, religious, or political affiliations – all progressive forces in Sri Lanka including the political parties, rise to the challenge to counter the trajectory Sri Lanka is heading, and to do all they can to preserve and promote the pluralistic character of the country.

Further, it is time for the international community to rethink its engagement approach towards Sri Lanka. Sri Lanka should be made to understand in no uncertain terms that the country will pay a heavy price if it continues its negative trajectory – whether it be on democracy, rule of law, human rights, accountability, and reconciliation or on fostering its pluralistic character. As a first step, the leaders of the international community, particularly those who consider adherence to international law as a cornerstone for decent and civilised world, should desist from direct engagement with Sri Lankan leaders who so blatantly flout the foundation of international norms. The Sri Lankan leaders will do well to earn the respect and honour deserved for bona fide leaderships.

-A press statement issued by the Global Tamil Forum