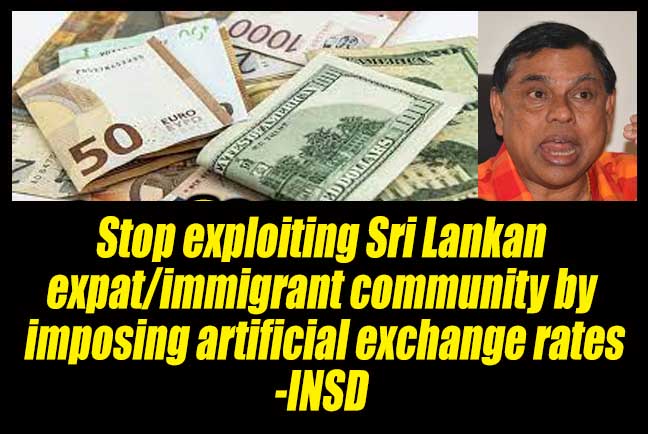 Parallel exchange rate premiums have widened in recent times as Sri Lanka government has printed trillions of Rupees and flooded the market.

In the open market in Sri Lanka a US dollar fetched nearly 250 LKR although artificial rates maintained by Central Bank of Sri Lanka is around 200 LKR for one US dollar.

Under these circumstances, a Sri Lankan migrant worker who sends a thousand dollars to his relatives through official banks will receive less than 50,000 rupees compared to open market rates. This is very heinous exploitation of Sri Lankan expat/migrant working community.

The political class of Sri Lanka, which is mired in corruption and fraud, spends this exploited money to ensure their well-being and not for the benefit of the people. And the parallel exchange rates are a result of the poor economic management of the Rajapaksa regime.

As a result of these bogus exchange rates, the Sri Lankan expat/immigrant community is facing a serious financial loss because of remittances earned by their physical or intellectual labour abroad.

In this situation, the expat/migrant working community is forced to resort to unofficial money transfer schemes to send the money they earn to their country at the maximum rate of their choice.

The International Network for Sri Lanka’s Democracy (INSD) stand by the expat/migrant community in this difficult situation and states with responsibility that they have right to transfer their earnings in the method of their choice.

On December 4, the Central Bank of Sri Lanka announced that it was prohibiting the sending of remittances by such informal channels and said that it will establish a special police unit to monitor and punish those involve in such transfers.

In this way the Rajapaksa government is going to snatch billions from the expat/immigrant community through these illegal activities.

INSD unequivocally condemn this statement and states that GoSL does not have a right to rob a million strong Sri Lankan expat/ migrant community of their due share in foreign exchange.

In other words, the Rajapaksa government which has been inflicting severe economic hardships on the people because of their failure to govern, are threatening the more than one million Sri Lankan expat/emigrant community.

In Sri Lanka the rising cost of living is determined by the real market rates, not by the pseudo-foreign exchange rates.

Threats and intimidations are most used weapons in Rajapaksa arsenal. This is another inhuman act of the Rajapaksa regime's anti - democratic and anti-people policies.

The International Network for Sri Lanka’s Democracy (INSD) urges all democratic forces in the country to condemn and oppose this illegal move and to come forward to defend the right of the expat/immigrant community to repatriate their income as they wish.

(The International Network for Sri Lanka’s Democracy (INSD) is an association of Sri Lankans living in Europe and has been active for over three decades.)

On behalf of INSD Board Members