A People’s Constitution; The Need To Think Outside The Box..! 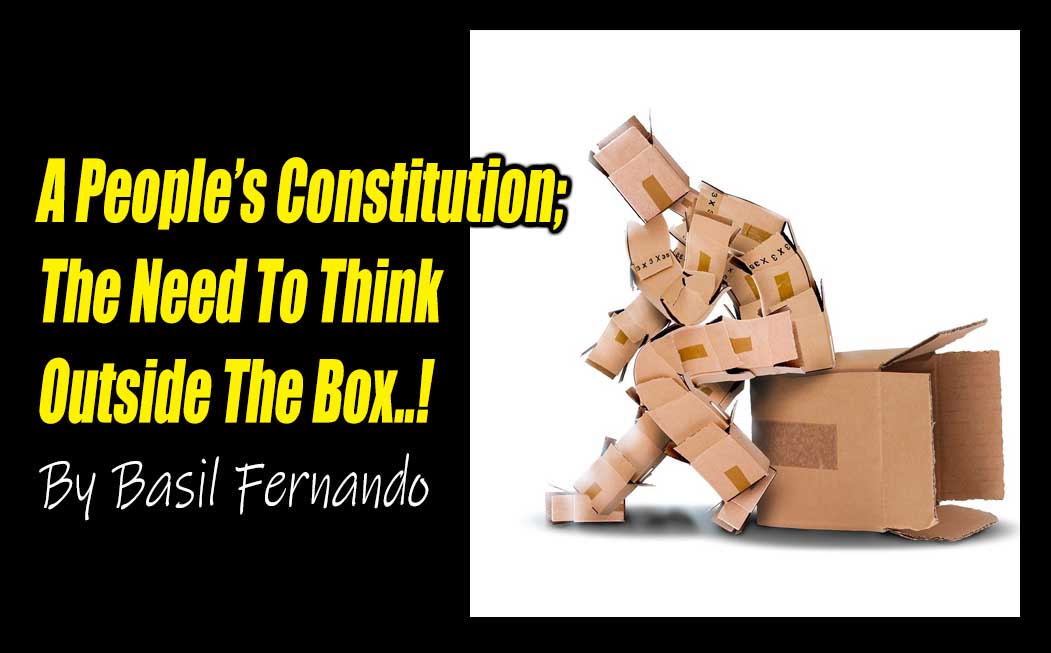 (Lanka-e-News - 14.Dec.2021, 11.25PM) The discussion on the making of a new constitution through an intensely participatory process, as against underhand methods, is now on. These are a few thoughts as a response to some questions that are being discussed.

In dealing with the problem of the 1978 Constitution, we are in fact confronted with the falsification of several fundamental ideas relating to constitutionalism. The purpose of these falsifications is to create a semblance of democratic legitimacy and an appearance of democratic legality to a document that is extremely crude in nature in terms of the aims it wants to achieve. The core is to displace democracy altogether.

In dealing with an issue of that nature, thinking within the box is not going to provide us with any clue as to how to get out of this situation. It is important to think out of the box and expose first of all the utter crudeness of the document that we call our Constitution.

What we are dealing with is not a mere matter of sophistry. We are dealing with a very practical issue which has now put the whole nation in peril in every aspect of social, economic, legal and cultural life of Sri Lanka. We are dealing with a context in which the country that has reached the worst point by way of an economic crisis, social crisis and a law and order crisis that is many times magnified than what it has experienced in the recent past.

This is not an issue of logic or law. It is about the conditions of the lives of the people. For very many, it has become a matter of survival itself. For many others, it has become a question about whether they are going to stay in Sri Lanka or not. Thus, the constitution making is only a part of an attempt to resolve the ground realities that have caused this situation. The 1978 Constitution, is one of the important causes of such, that has brought this situation in the country.

Our starting point is that one of the causes of this evil situation is the 1978 Constitution itself. It requires to be removed if there is to be a solution to these basic ground level problems that the people are facing.

We do not say that it alone will be the solution. We only say that without the removal of the 1978 Constitution, it is not possible to achieve any other significant change to resolve the problems that we have mentioned above.

Above considerations mean that today people will get involved in problems that in the past would have been more difficult to get people interested in. The necessity is the mother of all inventions. The new invention of a constitution that could provide a fundamental, legal framework to resolve the above mentioned problem is today not an option, but a necessity.

Therefore, in the circumstances of this nature, once the people are involved, this means that we are calling upon the genius of the nation to deal with some fundamental problems that they cannot escape from if they wish to survive. If this genius is brought to play in order to consider problems of this nature, it is possible for people to develop ways to circumvent this kind of purely abstract level of problems, such as the limits placed by the 1978 Constitution as to how to repeal or replace it, Some abstractions can be found or some abstractions can be completely ignored in the process of making important changes in the circumstances of the lives of the people.

It was not possible to think beforehand of the manner in which the South African Constitution which provided a solid foundation for the apartheid could be repealed and replaced with notions fundamentally opposed to that Constitution. Those who worked towards a movement to defeat the apartheid did not beforehand have legal formulas by which to remove the apartheid. However, as the movement progressed, the rationality and the justice of the cause became obvious, when the consequences of avoiding a just solution came also to be confronted even by the opponents to this movement and thus developed the kind of discourse that finally ended the apartheid. Various formulas which were necessary for legal purposes were developed in the midst of that kind of historically complex situation. The same could be said about many of the circumstances in which constitutional assemblies were developed as a means of formulating new constitutions in countries which were faced with far bigger problems than the kind of problems that Sri Lanka is facing. For example, in India, with the 1947 Indian Independence Act for when they left India, there was no provision in that Act for a constituent assembly. However, leading Indians knew that the people knew about the manner in which the great constitutions are made. They created their constitutional assembly, which created a national discourse on what the system of governance needed to be and created their own Constitution with a basic structure that provided a solid base for democracy.

The problem of the development of the process in Chile is a protracted one. It was not one act that brought about such but a series of actions which brought down the military style rule that prevailed in the country and established a democratic way of governance.

What all that implies is that at this stage of the discussion for a new constitution to be made by intense participation of the people, what is important are the following factors:

The existing Constitution should be completely repealed and regarded as one of the most unfortunate documents ever produced as a legal document – in fact a constitution, in the history of Sri Lanka, perhaps also in the whole world.

No constitution that is based on the same model should ever be recognized to be the constitution of Sri Lanka. There is enormous consensus on both these issues. It may not be so strongly articulated so far. However, when the process starts and if it is pursued seriously, that articulation will emerge. That was what was meant earlier as calling on the genius of the people to come to the surface. Today, Sri Lanka is very different to the Sri Lanka of 1931. Over the years, people have changed. A much more sophisticated population now exists. In that population, there are people from many layers who are able to articulate their problems very clearly and very strongly. In the recent months, when some critical issues came up, we saw the capacity of the people to intervene not only physically by ways of demonstrations and protests but intellectually, articulating the reasons as to why they reject certain actions of the Government. Thus, the talent for a considerably sophisticated debate on the matter of constitution making is available.

Perhaps, the most important factor is that the people have suffered under the 1978 Constitution. The sufferings are the greatest teacher in the course of history. Now, the people could reflect on their own bitter experiences with the purpose of working out ways to overcome the repetition of such bad experiences.

What is needed at the moment is to provide the opportunity to all sectors of the society: To men and women, to all communities of varying degree of conservatism or radicalism, to every group that has been suffering under the yoke of the old Constitution. For example, entrepreneurs who cannot develop their businesses in a rational manner in an atmosphere of interferences and corrupt practices, those who are engaged in other businesses like banks and particularly the Central Bank and accountability mechanisms are all being prevented from exercising their professional knowledge to bring about a rational state of affairs in their businesses.

All those who are engaged in law enforcement divisions including the criminal investigation divisions, intelligence divisions, and the like are all being subjected to severe forms of repression, forcing them to act not according to their professional ethics but according to orders which most of them find to be absurd, including also the working people of all sorts, the farmers, the workers, the teachers, the fishermen, and also particularly, disadvantaged persons like the people in the State sector, disabled persons, and the like.

If all these people find that the new constitution that they construct offers them great benefits of living in a more rational and stable society, they would be willing to make many compromises even on issues which proved more difficult in the past, like the minority issue. To begin the discussion with a complete negative-ness towards any sector, however conservative they may be, is to lose the battle at the very beginning. The constitution must be seen as a form of rational discourse within which any problem can be solved peacefully. That will remove many fears about unfair competition and some people taking advantage of certain circumstances as against others. We are at this stage now. We have to begin the process of discourse. How to resolve certain technical issues should be left to the manner in which this discourse will take its turn.