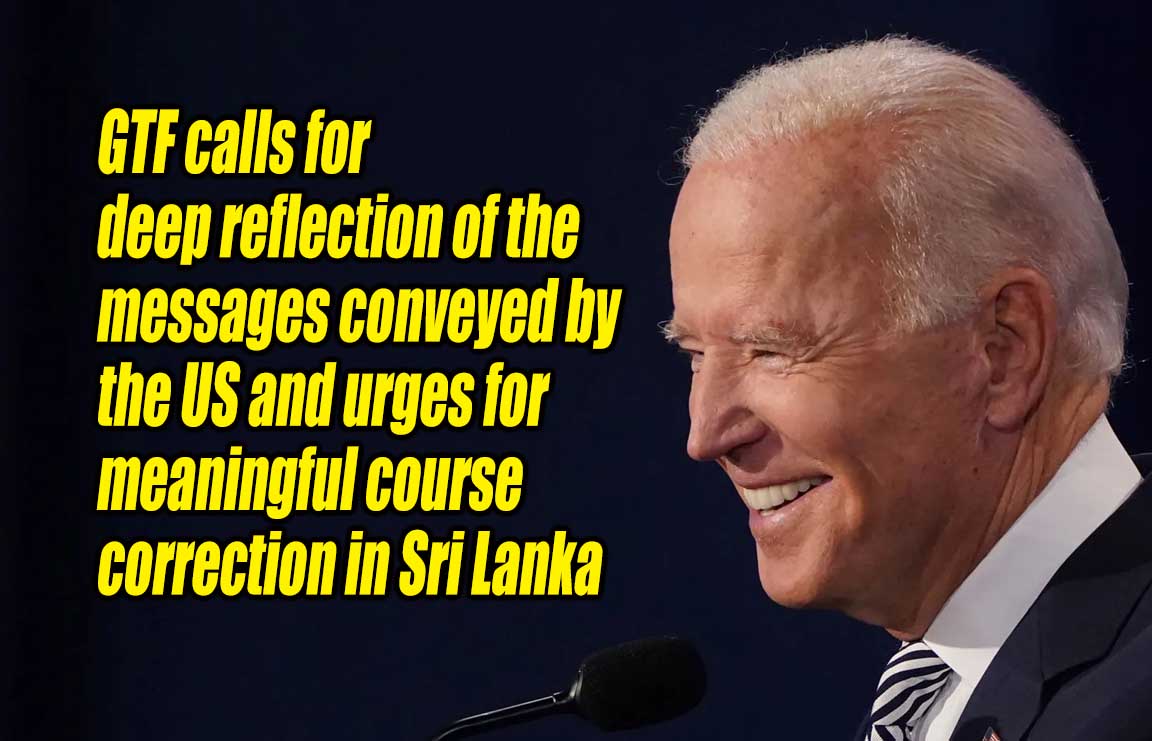 (Lanka-e-News - 17.Dec.2021, 8.45PM) Sri Lanka is in the midst of many crises. The trajectory it is heading – increasing authoritarianism and militarised governance; further marginalisation of Tamil, Muslim, Hindu, and Christian communities; and the debilitating financial crisis and the economic challenges engulfing the people – has the potential to seed new conflicts in the country. Sri Lanka’s credibility as a trusted member of the international community has taken a beating in the recent years and the emerging geopolitical reality, where human rights is increasingly a cornerstone of the foreign policy of many western countries, will only exasperate the situation.

US President Joe Biden hosted a virtual summit on December 9-10, 2021 for leaders from government, civil society, and the private sector. The summit focussed on challenges and opportunities facing democracies and provided a platform for leaders to announce both individual and collective commitments, reforms, and initiatives to defend democracy and human rights at home and abroad.

The current Sri Lankan regime, which is increasingly being viewed as having more characteristics of an autocracy than democracy, was not in the list of 110 states that were invited to attend.

Marking the Human Rights Day on December 10, 2021, the US government has imposed human rights-related sanctions on two Sri Lankan military officials: Chandana Hettiarachchi, a Sri Lankan naval intelligence officer, for his involvement in the Trincomalee 11 abduction and murder case (2008 to 2009), and Sunil Ratnayake, a former Staff Sergeant in the Sri Lanka Army, for his involvement in the extrajudicial killings of at least eight Tamil villagers (2000). The former was spared from prosecution and the later was pardoned after conviction – actions that were not consistent with international standards and expectations.

The US sanctioning these two officers appears more for the message it conveys to the Sri Lankan leadership, than for its direct impact on the individual officers.

The Human Rights Day statement from the US Secretary of State, Antony J. Blinken, articulated Biden administration’s intent to put human rights at the centre of the US foreign policy and their preparedness to use appropriate tools and authorities to draw attention to and promote accountability for human rights abusers and violators the world over. The statement also referred to the cooperation between many countries (including US, EU, UK, and Canada) with the same intent.  Clearly, the world is entering a new era where the regimes dependent on authoritarianism, militarisation, human rights abuses, and state sanctioned violence can be expected to be checkmated on many fronts.

Undoubtedly, Sri Lanka is on the international radar. This is evident on the letter from the US House of Representatives Committee on Foreign Affairs to the Secretary of State Antony J. Blinken (December 3, 2021), urging the State Department to “refocus its efforts in Sri Lanka to emphasis on the importance of a substantive and durable political solution.” As per the letter written by Committee Chairman Meeks and Ranking Member McCaul, “The US has rightly championed justice and human rights in Sri Lanka. Advancing these values will require solutions to political questions that remain unanswered years after the end of the civil war, including the meaningful devolution of power in an undivided Sri Lanka.”

The letter, whilst emphasizing that it is the Sri Lankan people who should lead the debate on the matter, perhaps supported and facilitated by the US, the outcome must meet the “needs of all citizens in Sri Lanka, including the Tamil and Muslim people.”

The Global Tamil Forum (GTF) through its recent engagements with several countries found the same sentiments and the willingness to play a constructive role in resolving many issues afflicting Sri Lanka. Their interests and commitments cover all aspects – promoting human rights and accountability, playing a supportive role in resolving the decades long political conflict, and embarking on impactful initiatives to help the people overcome their crippling economic challenges – whilst appreciating the strong interconnections among all.

Presently, this appears to be the only silver lining in the dark clouds hovering over Sri Lanka.

It is noteworthy that a joint delegation from the Tamil National Alliance (TNA) and Global Tamil Forum (GTF) recently (w/c 15 November 2021) met with senior US government officials - In Washington, the Delegation met with Assistant Secretary of State, Ambassador Donald Lu; Deputy Assistant Secretary, Ambassador Kelly Keiderling; Acting Assistant Secretary for Bureau of Democracy, Human Rights, and Labor, Lisa J. Peterson; Ambassador Michael Kozak of the Office of Global Criminal Justice; and Director for South Asia Security Affairs and Director for Democracy and Human Rights of the National Security Council at the White House. The delegation also met with senior staff members of the House Foreign Affairs Committee and the Senate Foreign Relations Committee; the Assistant Administrator of the USAID; Legislators from the United States Congress; and former US Ambassadors to Sri Lanka and Assistant Secretaries for the region. In New York, the Delegation met with the US Deputy Permanent Representative for the UN General Assembly.

GTF calls on the Sri Lankan people, the civil society organisations and their political leadership to deeply reflect on the messages directly or indirectly conveyed by many countries, particularly the US, and to appreciate the need for meaningful course correction with the long-term interest of all the peoples at the core. We have no doubt that a large segment of the diasporic communities, including the GTF, will play their part in any genuine and meaningful effort to address the multiples of challenges Sri Lanka’s diverse communities are confronting.