A man borrows two papayas to feed his starving children..! 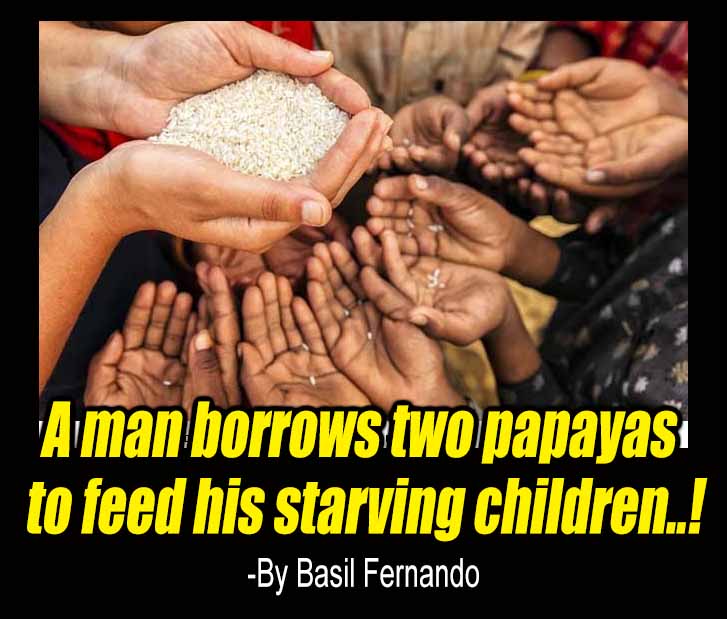 (Lanka-e-News -07.Jan.2021, 9.50pm) A man of about 50 years, walks to a vegetable shop in Savithripura, Anuradhapura, and in front of a few others who also have come to buy some vegetables, he asked the small shop owner whether he could borrow two raw papaya fruits from the shop owner’s garden, in order to feed his children who have been starving for two or three days. The surprised shop owner immediately obliged. It is one of the persons who was present that reported this matter.

Another lady in her 30s reported an incident which she has seen when she went to visit a neighbour’s house. The women of this house had made small rotis from 200 grams of flour since that was all she could manage to buy in terms of food for the day. She had given two of the small rotis to a young child and divided the balance roti to be shared between herself and her husband. Her husband is bedridden with serious kidney problems and under these circumstances, the family had no money to buy his medicines. These and several other stories were told by a group of persons from the area who were narrating what they themselves have been shocked to see in recent times.

Throughout the country, various groups including economists, persons from various political parties, and others are discussing the issue of the economic crisis faced by the country mainly due to the Dollar shortage, besides other reasons. There are many discussions in the media channels and talk shows where various kinds of discussions are being held on the impending crisis which is expected to make things much worse within a short time to come. Various kinds of discussions are also held about the possible solutions, for example, there are issues like whether to go to the International Monetary Fund to obtain a loan to deal with the present situation. Even Ministers sometimes join in, talking of the gravity of the situation.

However, what is not talked about publicly is the manner in which the people, particularly the lowest income groups, are coping up with the present situation. Their stories are not brought to the surface.

However, much more than abstract discussions on the issue of the economic crisis as well as the societal crises of every kind, what really will make the difference is by bringing the narratives of the actual circumstances of the manner in which the people cope up with their basic food necessities. Again, what is needed is not an abstract discussion on food availability or food security but a detailed account of how various families particularly within the lower income groups which constitute quite a larger part of the Sri Lankan population cope up with the food problems.

If these narratives are brought about, it is quite likely that some quick response could be made to alleviate this situation. We know from past experiences that such measures had been adopted and the acute forms of malnutrition had been brought down in Sri Lanka on several occasions.

One time when even the sending of children to schools became problematic due to the food problems faced by the children, there was the adoption of giving noon day meals for the children. Some politicians became even known popularly as Banis Mama – an uncle who gives bread, due to the advocacy of a policy of the alleviation of children’s hunger in order to encourage the children to come to schools.

In at least two other occasions, the Thriposha was manufactured and distributed particularly to women from lower income groups who were pregnant. According to reports, such measures proved adequate to prevent such ill effects of malnutrition such as the low weight of babies and also stunting.

It may not be a very attractive issue for journalists and media persons to interview those who are facing this kind of food issues and to report this to the public in a society where news often means reports about the political quarrels of political parties. The problems relating to the livelihood of the people, particularly, the problems of food and other basic necessities go unreported.

However, it is time that the actual situation of food security as experienced by the people be researched into by way of interviews and by other means and that these stories be told to the country as a whole.