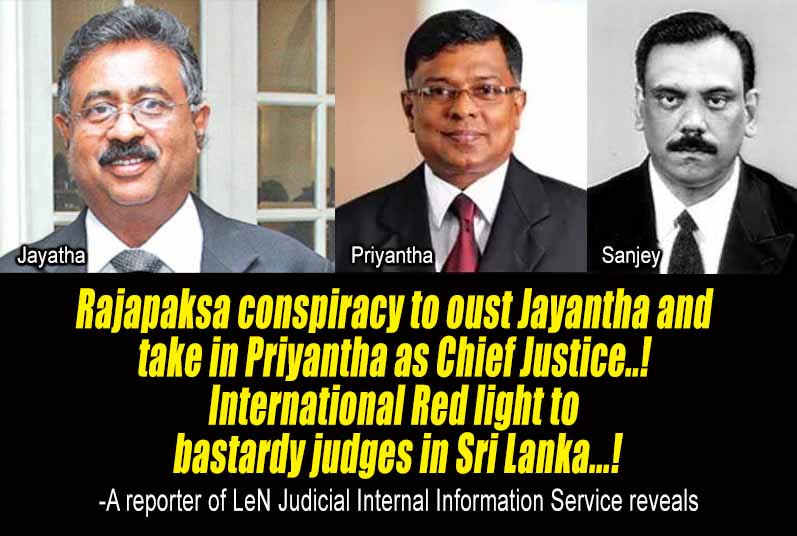 (Lanka-e-News -08.Jan.2021, 8.45am) A conspiracy to oust Chief Justice Jayantha Jayasuriya from the post of Chief Justice and appoint Supreme Court Judge Priyantha Jayawardena who is notorious as a henchman of Basil Rajapaksa's is in full swing.

A serious problem for the Rajapaksas...

This has become a serious problem for the Rajapaksas. The best Rajapaksa stalwart in the Supreme Court, Priyantha Jayewardene, can be the Chief Justice for as little as eight months. Priyantha Jayewardene, who had only acted as Basil's lawyer, was immediately sworn in as President's Counsel and then immediately appointed as a judge of the Supreme Court! Rajapakshas’ motive behind it was to dance they want way when the henchman Priyantha is in the seat of Chief Justice.

The Rajapaksas are angry enough to kill and eat Jayantha...

The indecent procedure followed to oust Shirani Bandaranaike was a boomerang for the Rajapaksas. Therefore, the Rajapaksas are now reluctant to re-launch the same shameful procedure even though they have a two-thirds majority today. The conspiracy they have now launched is to work to the point where Chief Justice Jayantha Jayasuriya is to consider his-own resignation.

Accordingly, various allegations are now leveled against Jayantha through Priyantha Jayawardena. The most of the criminal cases against the Rajapaksas were filed by Jayantha Jayasuriya when he was the Attorney General. So, the Rajapaksas are angry enough to kill and eat Jayantha. More than 75 of such cases filed during Jayantha's tenure have now withdrawn from the courts by another henchman Attorney General Sanjay Rajaratnam on technical grounds. There is nothing the hearing judges can do when the Attorney General is withdrawing the case. Although those technical issues can be rectified and re-filed the case, not a single case has been re-filed so far.

Jayantha Jayasuriya is also under severe mental stress because the cases he filed as the Attorney General are now being withdrawn when he is holding the post of Chief Justice but now he has nothing to do against it. Meanwhile, Basil’s henchman Priyantha Jayawardena behaves as the unofficial Chief Justice, surpassing the Chief Justice Jayantha at the panel discussions of the Supreme Court.

Meanwhile, Priyantha Jayawardena, has also been appointed as the Chairman of the Special Presidential Commission assigned to study and implement the recommendations of the Pissu Poosa’s (former SC Judge Upali Abeyrathne)  Presidential Commission to Investigate Political Revenge. Priyantha is now working day and night to implement the ‘Pissu Poosa’s nonsense recommendations for no other reason than to immediately appease the Rajapaksas and jump into the Chief Justice's chair somehow.

While such a scandal is taking place inside the Supreme Court, a different situation is developing internationally. The international community, well aware that the Sri Lankan judiciary is almost a puppet in the hands of the current executive president, is doing its best to identify the judges who are henchmen of Rajapaksas and do what they can against them. That is, those judges are not issued the visas they need to travel abroad. So far, the children of several such judges have applied for visas to study abroad, but have not been granted for no reason. If an embassy refuses a visa to enter its country, there is nothing you can do about it. The said embassy is not obliged to give reasons. Therefore, the time ahead is not good for such judges.

There is one thing that all judges need to understand. As declared by the people, the Rajapaksas of Medamulana are an endangered species. Are you going to become extinct with them? If not, moving in the direction of evolution? You must choose one.

- By a reporter of the LeN Judicial Internal information Service