Mystery of Sarah is revealed along with the mystery of Saharan's Vavunathiv machine gun...! Strong evidence on connection of military intelligence...! 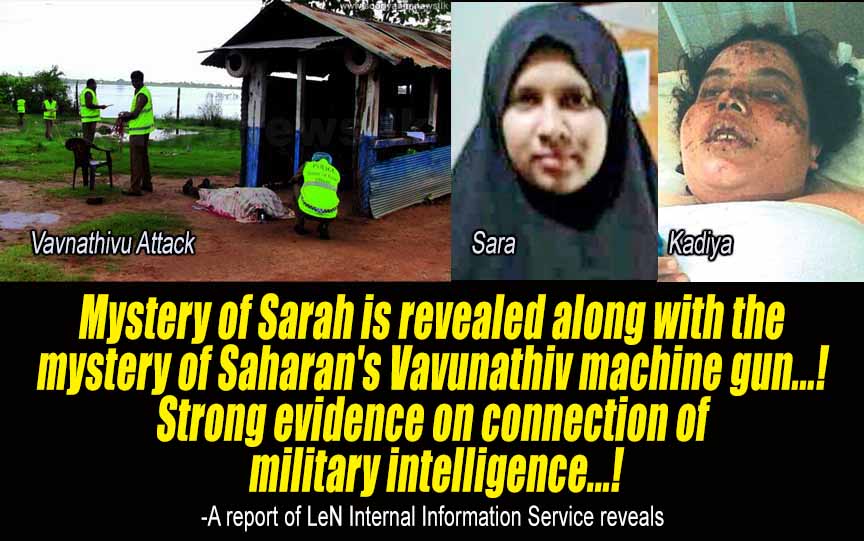 (Lanka-e-News -16.Jan.2022, 11.00AM) Following the revelation of the mystery of Saharan's T-56 firearm, strong evidence that reveals how military intelligence worked with Saharan has emerged. At the same time, the connection between Sarah Jasmine and the current Head of the State Intelligence Service, Major General Suresh Sale, has also been revealed. First of all, the secret of Saharan's T-56 firearm was revealed as follows.

Two police officers were killed at the police checkpoint in Vavnathivu during the constitutional coup by President Maithripala Sirisena. Mahinda Rajapaksa was the Prime Minister at that time. DIG Nilantha Jayawardena was the head of the State Intelligence Service.

The attack was an armed rehearsal for Saharan Hashim's Islamic extremist group. Two police officers, Niroshan Indika Prasanna and Ganesh Dinesh, were killed in the attack. It became clear that neither the LTTE nor its remnant group had anything to do with the attack.

The illegitimate Sirisena-Rajapaksa government wanted to create LTTE terror by concealing the real perpetrators of these killings and passing the blame on to the LTTE. On the other hand, the Saharan Hashim gang, backed by an undercover unit of the military intelligence service, also needed more time. That is why Nilantha Jayawardena credited this attack to the LTTE.

The most important piece of evidence in a murder investigation is the weapon used in the murder. That is why assassins throw their weapons into rivers or the sea.

Police were unable to locate the T-56 assault rifle used in the Vavunathivu murder. It was discovered following information revealed during the interrogation of Saharan Hashim's driver after the Easter Sunday attack. He revealed that the assassination of [two policemen] in Vavunathivu was planned by Saharan Hashim and that the T-56 weapon used in the assassination was hidden in a house in the Saindamarudu area.

Accordingly, this automatic firearm was found on 26 April 2019, five days after the Easter Sunday attack.

Analyst reports confirmed that the T-56 automatic weapon found in Saindamarudu house was the one that killed two police constables, Niroshan Indika Prasanna and Ganesh Dinesh, in Vavunathivu. That is when the mystery of this murder begins to unfold.

The mystery of the murder...

But Abdul Razak, who arrived ten days later, returned his firearm. Its number was T 56–28050884, the same number of the firearm that was officially given to him.

The case against Abdul Razak was dropped and he was freed on 3 April 2017 due to alleged technical glitches (by which many ministers escape from criminal cases these days).

The next scene in the play...

The next scene in the play unfolds after the discovery of the Vavunathivu murder weapon found in the Sainmarudu house.

In order to unravel this problem, the detectives of the Special Investigation Division of the Police examined the firearm No. T 56–28050884 handed over by Abdul Razak in the year 2008. They then saw that the original number of the weapon had been erased and the number T 56–28050884 had been re-engraved on it.

Deleting a firearm number and rewriting another number with the same letter is not an easy task. This can only be done by the sophisticated machines in the Army's machinery or electromechanical division.

Abdul Razak was summoned to the Special Investigation Unit. He started to cry when asked what happened to the original firearm given to him by the Eravur police. He admitted that he had given the firearm to a Muslim group working with the Army on instructions. He was also given a firearm with a fraudulent number that was handed over to the police.

Lanka-e-News has received further information about this group but due to security reasons this information has to be kept confidential at this time.

Ten days ago, the report of this investigation was handed over to the IGP by the SSP of Special Investigation Division of Police, D. S. Wickramasingha.

The Easter Commission report states that Saharan Hashim's group was trained in weapons by two Muslims who worked with Army intelligence. The report says that “Jameel”, a mysterious figure in the Easter attack, was also involved in the military intelligence service.

Even Mahinda Rajapaksa has admitted that, during the war, 42 Muslim spies were paid by military intelligence from secret accounts in the Ministry of Defense. According to MP Harin Fernando, members of the military intelligence service had met Saharan Hashim before the Easter attack. He also says that there is an audio tape related to it.

“Pulastini Mahendran” alias “Sarah Jasmine”, who is said to have fled to India from the last moment of the Saindumarudu house where Saharan's father and brothers were killed, is a paid spy who worked with then military intelligence chief Suresh Sale. A Tamil girl, she is fluent in all three languages. She does not often wear Tamil or Muslim clothes and is a scooter riding mod girl wearing T-shirt and jeans. It was later revealed to the police that she was born on 7 March 1996 in Thettativu, Kalanchikudi, and her NIC Number was 965672702V but it is not known whether the information is true or not. This is because the military intelligence itself produces various identity cards for the spies.

Sarah gets on IP Jaffar's motorcycle and runs away…

According to information received after the April 21st attack on churches, STF troops on 26 April surrounded a house in the Volivorian area of Saindamarudu, Ampara, where Saharan's father, brothers, and the wives of the suicide bombers were staying. Though Saharan's father, brothers and others committed suicide by exploding a bomb, Saharan's wife, Abdul Cader Fatima Qadia, took her four-year-old daughter, Mohamed Rubaiya, with her and hid behind a wall outside, and survived. Sarah Jasmine had also been away from the group who committed suicide.

Sarah Jasmine, who was on the road, waved hands to Kadia, who regained consciousness after the explosion, and told her to come over. At the same time, Sarah got on a motorcycle and ran away. The motorcyclist was the person called Police Inspector ‘Jafar’. At that time, the area where the house is located was surrounded by STF troops on one side and the Army on the other. IP Jaffer, who was carrying Sarah, fled through the area surrounded by troops. That is, a high-ranking officer in the army had helped them escape from the security cordon. At that time the said army group was commanded by Major General Janak Mudalige.

Sarah so disappeared and Saharan's wife Kadia and her daughter were taken into STF custody. Kadia was hospitalized and at the hospital, statements were obtained from her by the CID as well as STF intelligence. In each case, an officer of the Army Intelligence, has controlled her statement staying nearby. Before the Easter Commission, Kadia has given a lengthy testimony, which was obtained secretly, but not included in the final report of the said commission..

No any interest in finding Sara...

It has been revealed that Sarah even provided the Raw intelligence service with accurate locations of the churches on the morning of the day of the Easter attacks. It is suspected that that plot was also hatched by Suresh Saleh, one of the masterminds. On the one hand, he has implicated the Raw intelligence service to provide information to Colombo; That was to prevent the finger of suspicion from pointing at him. He has also planned to prevent Sri Lankan security chiefs from acting on the information given by Raw intelligence. So, he was able to keep the real designers of the bombing hidden while allowing the bombs to explode.

However, it is clear that the Raw intelligence service has acted to save the life of their spy. Government of Sri Lanka is making no effort to find Sarah Jasmine in the investigation.

'Amy Mohideen' and 'Faiz', who worked with Saharan, were also two men who worked under Suresh Saleh while he was the Chief of Army intelligence, receiving a salary from the intelligence unit.

In light of all this, it has been unquestionably confirmed that the Pro-Rajapaksa intelligence chiefs were behind the Easter Sunday attack.

As one thousand days have passed on 14th January after those attacks, an idea has come to the fore that the Easter Sunday attack was deliberately organized by the dark organization known as "Deep State", run by the heads of the intelligence services of state security forces and the relevant politicians.

- By a reporter of LeN Internal Information Service