LeN Keerthi freed after 8 months...! No victories without struggle...!! 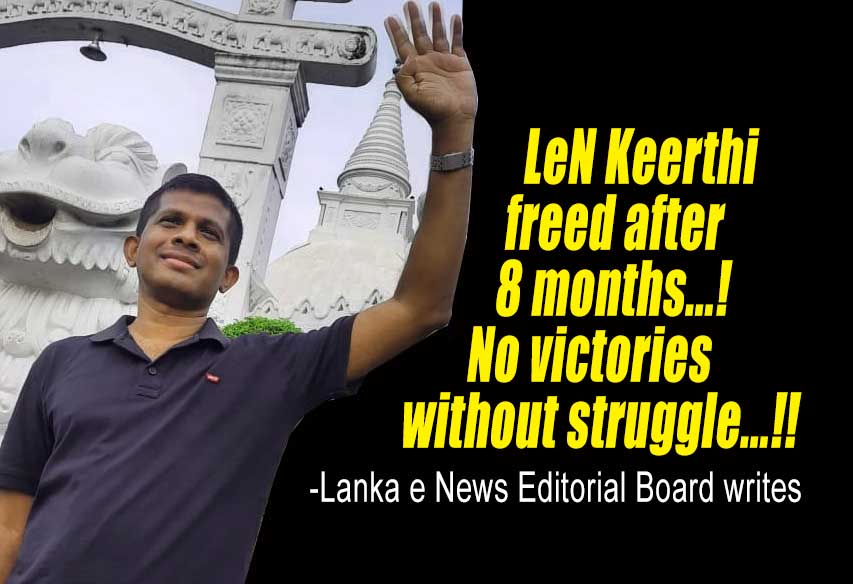 (Lanka-e-News -13.Feb.2022, 10.00AM) Fort Magistrate Priyantha Liyanage 9th of February ordered the release of LankaeNews security and political analyst Keerthi Ratnayake, who had been imprisoned by the Rajapaksa regime over a period of 8 months on absurd charges, on a personal bail of Rs. 50,000.

In fact, what should have happened was acquittal and release. This is because the Attorney General had rejected the allegations made against Keerthi by the CID under the Prevention of Terrorism Act. Earlier, the judge had sought the opinion of the Attorney General and the latter had stated yesterday that there were not enough charges against Keerthi to pursue a case under the Prevention of Terrorism Act. The first allegation made by the CID against Keerthi was that he had received information about a terrorist attack but not provided that information to the police (the Attorney General had denied the allegation). Accordingly, Keerthi should have been acquitted of all the charges and released. However, the CID had recently told the court that further investigations into his letters published on the LankaeNews are pending. Therefore, the CID also requested the court to issue a bail condition order that he should appear before the CID every Sunday morning. Judge Priyantha Liyanage rejected the CID's request for conditions and released Keerthi on a personal bail.

Journalist Keerthi Ratnayake angered the Rajapaksa regime by reporting to LankaeNews exposing the corruption in the regime's security forces. They, who were looking for an opportunity to hunt down Keerthi, were able to catch him through a warning he made to a friendly official of the Indian Embassy in Colombo. That warning was an analysis that said that there was a possibility of a Taliban attack on the Indian Embassy in Colombo on the last Indian Independence Day. It was an analysis of possibility, not a specific case, but those who were looking to hunt down Keerthi used the incident as a stalking horse and arrested him under Section 5(1)(a) of the Prevention of Terrorism Act, and detained for eight months, saying that not reporting to the police of a known terrorist attack is an offense.

He was called to the Kollupitiya police to give a statement. When he was going back, CCD chased and abducted him, and then handed over to the CID. During Keerthi's six months in CID custody, the CID did not question him about any terrorist attack but pursued his associates on suspicion of leaking information to Keerthi's documents. In short, the CID went even after the vendors who suppled his meals and questioned them.

The legal battle in the court…

Six months later, last December, CID produced Keerthi to the Fort Magistrate Court, and framed the charges under the Clause 5(1)(a) of the Prevention of Terrorism Act, alleging that the letters written to LankaeNews had harmed many persons of the government, therefore the further investigation is needed. Senior Counsel Upul Kumarapperuma, appearing for Keerthi, argued that Keerthi had not violated the Clause 5(1)(a) of the Prevention of Terrorism Act. That is to say, he had not received any definite information about a terrorist attack and what he had submitted to the Indian High Commission is his opinion on such a possibility. As he had even informed the relevant party in advance of his opinion to protect them from such an attack, it would not harm the meaning of concealing the information without giving it to the police as in Clause 5(1)(a) of the Act. Does a person who sees a house on fire first tell the police about it? Or he tells the householder, 'Your house is on fire'? The lawyers asked the court.

Kumarapperuma and other lawyers’ second argument was that the opinion of “a magistrate’s court does not have the power to grant bail to a suspect who is under the Prevention of Terrorism Act without the consent of the Attorney General” would challenge the clauses on the independence of the judiciary in the Constitution. The Constitution clearly states that the sovereignty of the people must be exercised through the executive, the legislature and the judiciary. Accordingly, the power vested in the Judiciary by the aforesaid Constitution has been subverted to the Executive by the provision in the Prevention of Terrorism Act that says “the Judiciary cannot take a decision without the approval of the Attorney General”. Upul Kumarapperuma argued that, since it is wrong, the magistrate can take decisions without the Attorney General's orders or consent.

However, Judge Priyantha Liyanage extensively studied the written submissions from both parties, together with the Hansard reports on the debates in Parliament when the Prevention of Terrorism Act was introduced.

The Rajapaksa regime is facing threats ahead of the upcoming March session of the UN Human Rights Council. The Rajapaksa regime's ongoing human rights abuses have been severely criticized, and now a committee has been appointed to study and report on the matter. Accordingly, the Rajapaksas have released on bail several internationally known suspects who were in their forced detention over the past few weeks. Dr. Safi, Hijaz Hezbollah, a group of youths who shared a picture of Prabhakaran on social media, and Azad Sally were among them. Following that, LankaeNews journalist Keerthi Ratnayake was also released on bail yesterday, stating that there was no reason for the Attorney General to continue a case.

The Human Rights Commission has also stated that eighty percent of those detained under the brutal Prevention of Terrorism Act in Sri Lanka are innocent. Therefore, this beastly Act must be repealed.

As he was arrested and detained for 8 months without any reason, Keerthi Ratnayake, through his lawyers, has filed a fundamental right case before the supreme court demanding Rs. 100 million in compensation from Defense Secretary Kamal Gunarathna, IGP C. D. Wickramarathna, Senior DIG Deshabandu Thennakoon, Minister of Police Sarath Weerasekara and 20 others; the case is due to be heard.

Keerthi Ratnayake is scheduled to attend a media briefing in the near future.

At LankaeNews we have a sustainable media objective. We are not a 'merely neutral' media. For 17 years we have worked tirelessly to become the voice of the voiceless people against ruling dictatorship, against opportunism, against religious racism, against superstition, against corruption, against injustice, against environmental destruction. The vast majority of those who have been joined us are dedicated volunteers working towards those goals. Keerthi Ratnayake is one of such persons. Keerthi, who wrote under his own name from outside Sri Lanka for many years, was not afraid to write under his own name even after entering the country. Many of those who appreciated our media service over the past 17 years were in the police stations, prisons and group of lawyers where he was detained, and we thank them for their support in various ways.

Even if anyone who works for true goals is killed, the 'struggle' will continue to move towards victory...! "Victory without struggle" lies in militant rhetoric; but not within the laws of nature...!