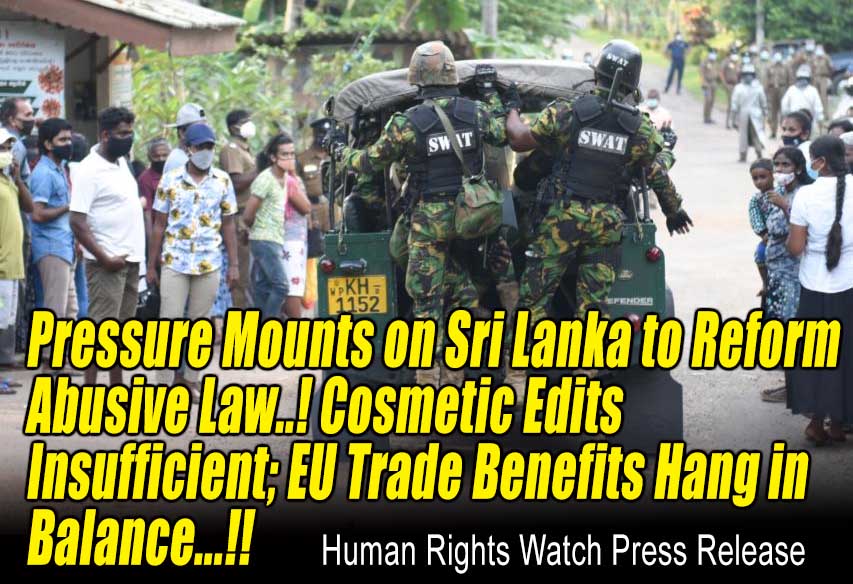 (Lanka-e-News -13.Feb.2022, 10.20AM) Sri Lanka’s government has recently unveiled a bill to amend its abusive Prevention of Terrorism Act (PTA), the Foreign Ministry hailing it as a “most progressive step” towards bringing the notorious law in line with “international best practice”. But the European Union is not buying it, and that may mean trouble for the government.

The proposed amendments were an attempt to salvage Sri Lanka’s tariff-free access to the EU market under the bloc’s GSP+ trading scheme, which is conditioned on respect for international human rights. But in a meeting in Brussels with their Sri Lankan counterparts, EU officials made it clear that “important elements had not been included in the Amendment Bill” and urged “further steps to make the PTA fully compliant with international norms.”

The EU also called for “practical and administrative steps to release on bail those detained under the PTA without charges.” Some detainees were released or bailed over recent weeks, but many more remain in arbitrary detention, often held for months or years, as a recent Human Rights Watch report shows.

Sri Lankan activists, lawyers, and victims of past abuses and their families have campaigned for decades urging the repeal of the PTA, which is used to enable arbitrary detention and torture, targeting the minority Tamil and Muslim communities, and suppressing civil society. The previous government had promised to repeal the law, but failed to deliver.

At risk of losing their GSP+ benefits, the administration of President Gotabaya Rajapaksa published in January the flimsy set of proposed amendments, only a few days ahead of a key meeting with the EU. Prior to the meeting, Sri Lanka’s Foreign Ministry issued a grossly inaccurate and threatening statement against recent testimony by a prominent human rights lawyer, Ambika Satkunanathan, to the European Parliament.

In December, UN experts identified five “necessary prerequisites” for Sri Lanka’s counterterrorism legislation to comply with international standards. The EU should continue to insist that those benchmarks be met: the freedom of countless Sri Lankans hangs in the balance, as does the country’s GSP+ status, which is vital to the economy. To safeguard it, the Rajapaksa government needs to uphold its human rights obligations, starting with genuine reform of the PTA, accompanied by a moratorium on its use and the release of those unjustly jailed in its application. Cosmetic interventions won’t suffice.