What Is The Greater Wrong - Contempt Of Court Or Illegal Detention..? 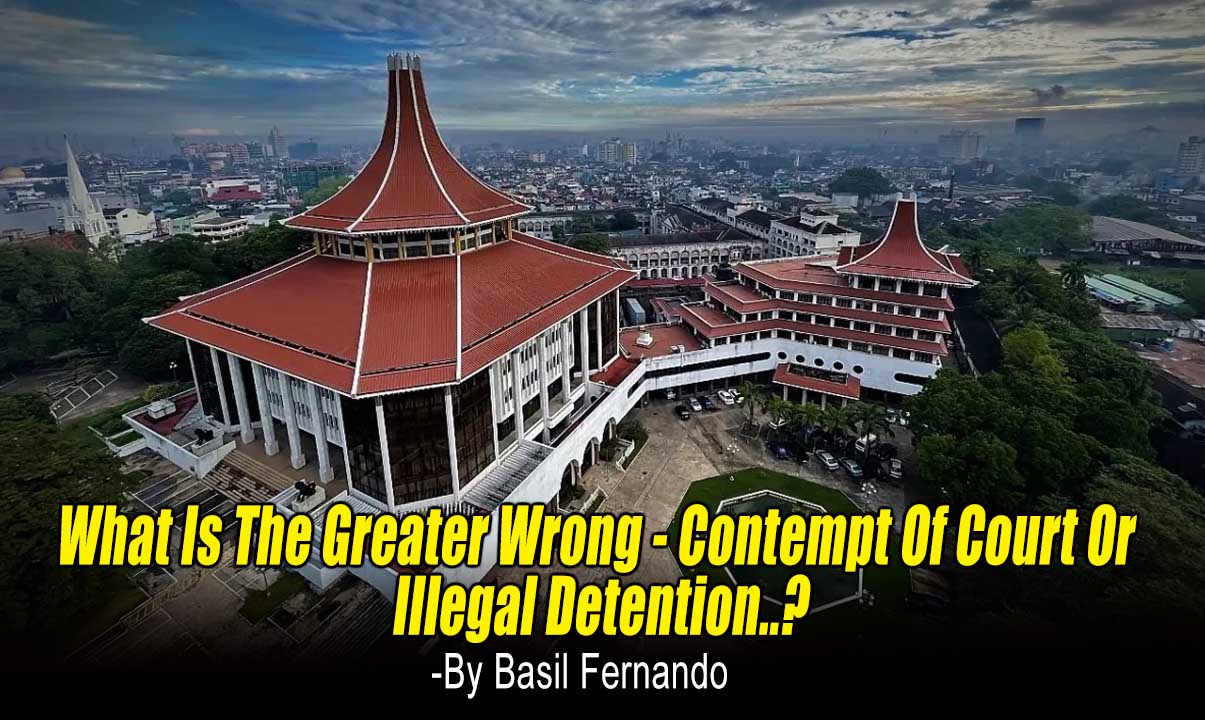 (Lanka-e-News -13.Feb.2022, 11.00AM) In two occasions, the United Nations Human Rights Committee (UNHRC) held in two separate cases decided by the Sri Lankan Supreme Court related to contempt of court that the punishment imposed by the Court amounted to disproportionate punishment and that such punishment amounted to illegal detention. The UNHRC held that on both occasions that the petitioners right to be free from illegal detention guaranteed under Article 9 of the International Covenant on Civil and Political Rights (ICCPR) has been violated. It further held that the State is liable for the violation of this right by the Court and that the petitioners are entitled to compensation.

Findings of the two cases are as follows:

“…….the only disruption indicated by the State Party is the repetitious filing of motions by the author, for which an imposition of financial penalties would have evidently been sufficient, and one instance of ‘raising his voice’ in the presence of the Court and refusing thereafter to apologize. The penalty imposed was a one year term of ‘rigourous imprisonment’. No reasoned explanation has been provided by the Court or the State Party as to why such a severe and summary penalty was warranted, in the exercise of a Court’s power to maintain orderly proceedings. Article 9, Paragraph 1, of the Covenant forbids any ‘arbitrary’ deprivation of liberty. The imposition of a draconian penalty without adequate explanation and without independent procedural safeguards falls within that prohibition. The fact that an act constituting a violation of Article 9, Paragraph 1, is committed by the judicial branch of Government cannot prevent the engagement of the responsibility of the State Party as a whole. The Committee concludes that the author’s detention was arbitrary, in violation of Article 9, Paragraph 1” (CPR/C/83/D/1189/2003. (Jurisprudence)

“In this jurisprudence, the Committee also observed that the imposition of a draconian penalty without adequate explanation and without independent procedural safeguards falls within the prohibition of the “arbitrary” deprivation of liberty, and within the meaning of Article 9, Paragraph 1, of the Covenant. The fact that an act constituting a violation of Article 9, Paragraph 1, is committed by the judicial branch of Government cannot prevent the engagement of the responsibility of the State Party as a whole.”

In the current case, the author was sentenced to two years rigorous imprisonment for having stated at a public meeting that he would not accept any “disgraceful decision” of the Supreme Court, in relation to a pending opinion on the exercise of defence powers between the President and the Minister of Defence. As argued by the State Party, and confirmed on a review of the judgement itself, it would appear that the word “disgraceful” was considered by the Court as a “mild” translation of the word uttered. The State Party refers to the Supreme Court’s argument that the sentence was “deterrent” in nature, given the fact that the author had previously been charged with contempt but had not been convicted because of his apology. It would thus appear that the severity of the author’s sentence was based on two contempt charges, of one of which he had not been convicted. In addition, the Committee notes that the State Party has provided no explanation of why summary proceedings were necessary in this case, particularly in light of the fact that the incident leading to the charge had not been made in the “face of the Court”. The Committee finds that neither the Court nor the State Party has provided any reasoned explanation as to why such a severe and summary penalty was warranted, in the exercise of the Court’s power to maintain orderly proceedings,“

The Sri Lankan Constitution has enshrined that the freedom from illegal detention is a fundamental human right.

The Supreme Court of Sri Lanka has a duty of guaranteeing the protection of this fundamental right.

No court is entitled to act in violation of the fundamental rights of the people.

Thus, this contradiction between the State duty to prevent illegal detention and the Court’s jurisdiction to deal with contempt of court needs to be removed by restating that the Court’s discretion does not extend to the granting of disproportionate punishments violative of the Constitutional right to freedom against illegal detention or any other such fundamental right.