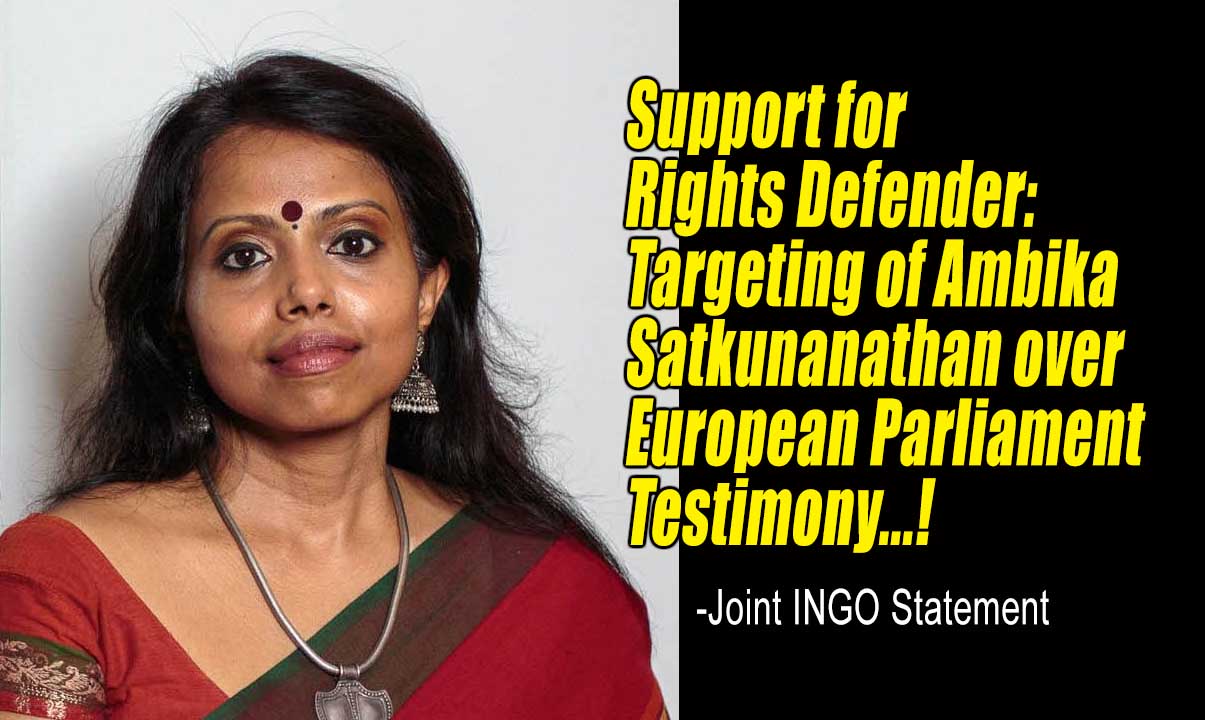 We the undersigned human rights organizations, express our deep concern about the statement issued by the Sri Lankan Foreign Ministry on February 4, 2022, in which the government denounced testimony given by Ambika Satkunanathan, a leading human rights lawyer, to the European Parliament on January 27. The government statement clearly constitutes an act of harassment and intimidation. We condemn the Sri Lankan government’s tactics to intimidate human rights defenders, and express our full solidarity with Ms. Satkunanathan, a well-known, respected, and courageous human rights defender. Targeting her for providing accurate testimony about the human rights situation in Sri Lanka to the European Parliament is completely unacceptable, and sends a chilling message to all Sri Lankan civil society, especially those in the north and east, who are already operating under considerable duress under the current administration.

Sri Lanka’s international partners, including the European Union, should publicly condemn the Sri Lankan government’s statement and express solidarity with Ms. Satkunanathan, who has been targeted for her international engagement, and increase their efforts to engage with Sri Lankan civil society at large.

The Foreign Ministry’s statement contains numerous false claims in an attempt to disparage and delegitimize a distinguished human rights advocate, placing her at risk of physical danger in retribution for her brave work. The government’s claim that her testimony was “reminiscent of LTTE [Liberation Tigers of Tamil Eelam] propaganda that once stoked hatred among communities,” and that “such allegations need to be refuted in the interest of social harmony” is particularly insidious and dangerous.

The government’s statement mirrors its repeated practice of falsely equating human rights defenders and human rights advocacy with those pursuing “terrorism.” The statement’s language aligns these baseless allegations with vague and frequently abused provisions under the Prevention of Terrorism Act (PTA), exposing Ms. Satkunanathan to a heightened risk of threats, attacks, and persecution.

Ms. Satkunanathan was a commissioner of the National Human Rights Commission of Sri Lanka before that body’s independence was compromised under the current administration and led the first national study on Sri Lanka’s prisons. Prior to that, she was for many years a legal consultant to the Office of the United Nations High Commissioner for Human Rights. She is the author of an important recent report on abuses committed during the so-called “war on drugs.”

We support Ms. Satkunanathan’s testimony to the European Parliament, which accurately described a situation already reported by the United Nations and many domestic and international human rights organizations. The government’s response contains numerous false statements, including:

⋆The government claims to be “engaged in long standing cooperation with the UN human rights mechanisms and the UN Human Rights Council.” On the contrary, in February 2020, soon after taking office, the government of President Gotabaya Rajapaksa withdrew Sri Lankan support from consensus resolutions of the council, repudiating commitments made by the previous government. Special Procedures mandate holders of the council issued a statement on February 5, 2021, noting that their recommendations, including on torture, the independence of the judiciary, arbitrary detention, enforced disappearances, minority rights, counterterrorism, freedom of religion or belief, and freedom of assembly and association, had been ignored.

⋆The government claims to be “strengthen[ing] rule of law, access to justice and accountability.” However, President Rajapaksa campaigned on a platform of protecting “war heroes” from prosecution, and has appointed individuals implicated in war crimes to senior government posts. His presidential commission on “political victimization” has sought to interfere in judicial proceedings and block trials and investigations in human rights cases implicating the president’s associates and the president himself. The president pardoned Sunil Ratnayake, one of very few members of the armed forces ever convicted of human rights violations, who murdered eight Tamil civilians including children.

⋆The government denies that civic space is shrinking, as Ms. Satkunanathan described in her testimony. Yet under the current government, many human rights defenders have said that they are subjected to continual government intimidation, intrusive surveillance, and attempts to block their access to funds. In her most recent update to the Human Rights Council, High Commissioner Michelle Bachelet wrote that, “surveillance, intimidation and judicial harassment of human rights defenders, journalists and families of the disappeared has not only continued, but has broadened to a wider spectrum of students, academics, medical professionals and religious leaders critical of government policies.” The UN Special Rapporteur on contemporary forms of slavery in his end-of-mission statement last December documented government intimidation of civil society and a “shrinking civic space.”

⋆The government claims there is no “concrete evidence of discrimination against minorities.” In fact, for nearly a year the government banned the burial of people said to have died with Covid-19, causing immense distress to the Muslim community without any medical justification in what is only but one example of discrimination against ethnic and religious minorities. Such burials are now permitted only at a single remote site. In January 2021, High Commissioner Bachelet found that, “Tamil and Muslim minorities are being increasingly marginalized and excluded in statements about the national vision and Government policy... Sri Lanka’s Muslim community is increasingly scapegoated.” The high commissioner’s findings are in line with reports by Amnesty International, Human Rights Watch, and others that the PTA is used almost exclusively against members of the Tamil and Muslim communities. The government continues to deny efforts to commemorate war victims belonging to the Tamil community.

⋆The government denies Ms. Satkunanathan’s description of alleged extrajudicial killings committed in the context of Sri Lanka’s “war on drugs.” However, these abuses are widely documented. In September, High Commissioner Bachelet said, “I am deeply concerned about further deaths in police custody, and in the context of police encounters with alleged drug criminal gangs, as well as continuing reports of torture and ill-treatment by law enforcement officials.”

The Sri Lankan government’s statement attacking Ambika Satkunanathan for her testimony to the European Parliament’s Sub-Committee on Human Rights exemplifies threats faced by human rights defenders, particularly when they engage with foreign and international forums, and it further shows the government’s refusal to address the ongoing serious human rights violations taking place in the country. Instead of trying to silence those who seek to defend human rights, the government should give serious consideration to their input and contributions, and take urgent action to ensure that they can work in a safe environment without fear of reprisals.