Pujith, Hemasiri freed...! Easter victims to be found guilty...! No solution other than going international...! 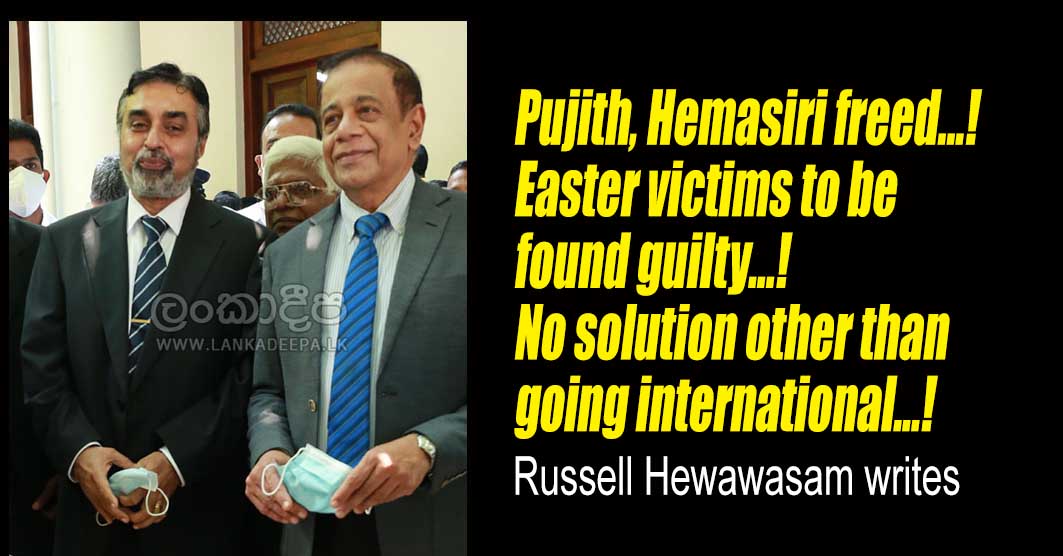 The High Court gave Hemasiri's verdict in the morning and Pujith’s in the evening. The panel consisted of Namal Balalle, Adithya Patabendige and Mohamed Irshadeen.

Attorney General had filed the criminal case against these two with 855 indictments. We can imagine about the outcome of the remaining cases as Pujith and Hemasiri had been acquitted without hearing the evidence of the accused, throwing all the 855 charges of the Attorney General into the trash without being heard. If the Attorney General of this country makes hundreds of thousand accusations against an accused, people should understand that is a case being dismissed without trial, and also a case filed for media show.

Accordingly, at the end of this so-called justice process regarding Easter bombing, the devotees who went to the churches on Easter Sunday and the 300 or so people who went to the tourist hotels are more likely to be found guilty.

What about Hemasiri's statement then…

What Hemasiri Fernando, the former defense secretary, said to the international media at the time about the Easter massacre was highly criticized by the world. You as well as we will never forget the stories he told then. "There were reports of a bombing, but I did not think it would be so serious. It is not the responsibility of the government to protect tourist hotels in Sri Lanka, it is their job to do so," Hemasiri said. Though Hemasiri was not one of the masterminds of the attack, it is clear to ordinary people from his statement that Hemasiri is guilty of not doing anything to prevent the attack while holding a key post in the Ministry of Defense.

One of the recommendations of the Presidential Commission is to file criminal charges against Hemasiri and Pujith. Government is distorting the report, concealing special sections, acquitting the perpetrators; in brief, the government is trying to make a victim of crime an accused victim. White vans are chasing those who expose that injustice. This government also turned the Easter Commission as another commission that squandered millions of public monies.

What the Catholic Church needs to do now is not to wait for another series of massacres by Easter criminals, but to fight for an international inquiry immediately without any fear that it will harm the country. If not, what will happen? You will have to cry out for the 300 lives that have been killed, and suppress it awhile, and to shed tears over a loss of thousands more new lives for political gain.

Present government is taking the country towards such a religious conflict. Attempts are being made to create a vulgar sinful hatred to get the Catholic community involved in such a conflict.

As these criminals have been charged for mass massacre by a full-fledged commission, attention should be paid to call for a possible international intervention, and the possible escape of these criminal from the country.

Links to the Gota’s government over the Easter massacre have now been exposed. We have one more question to ask.

Attorney General had filed 855 indictments against the former Secretary of Defense and the former Inspector General of Police; Are they all ridiculous allegations that cannot be tried even once by a special court?

Attorney General's Department, instead of protecting the public, is protecting the criminals under Gota’s government, sabotaging public money, tarnishing its official image.