To overcome Challenges, Opportunities, Weaknesses and Threats in Battle of “GotaGoHome”...! 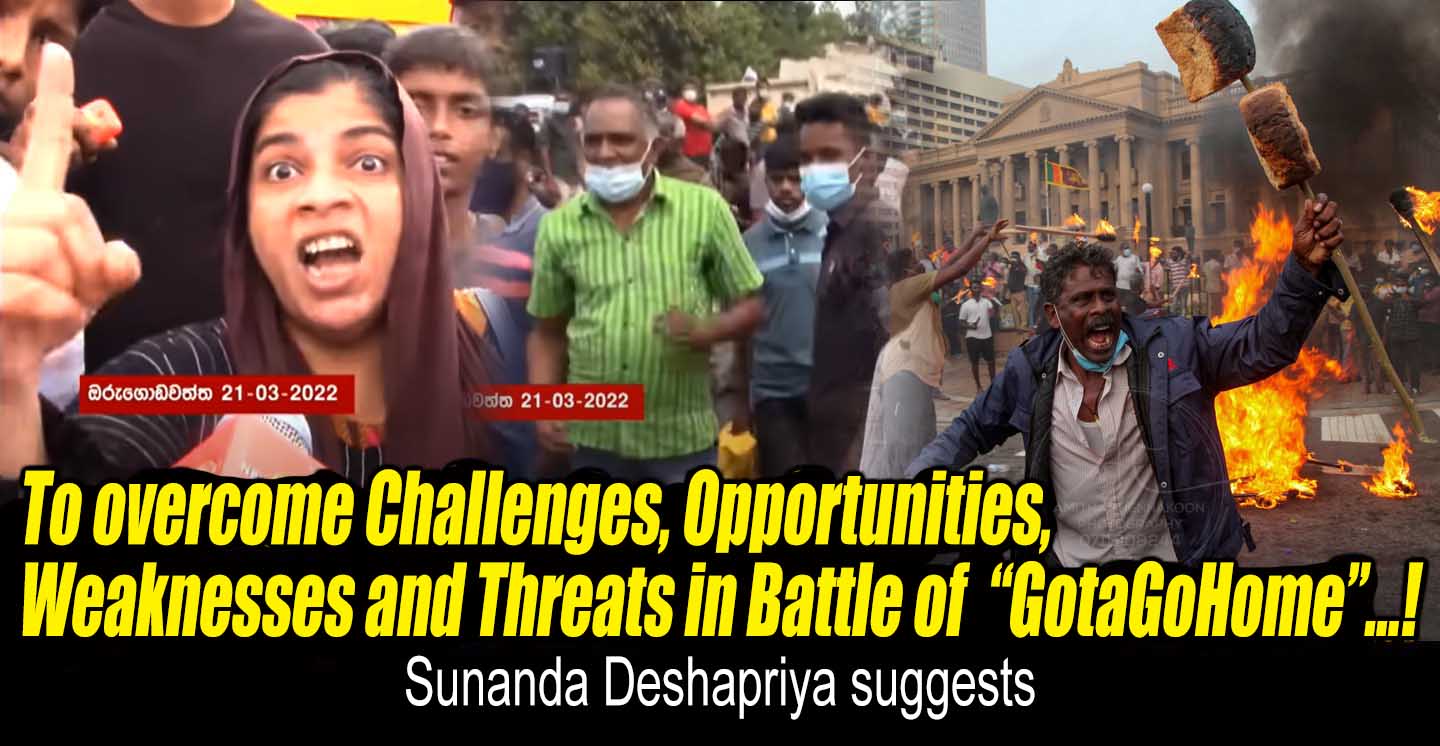 (Lanka-e-News-25.March.2022, 9.25 pm)  Gota go home! (#GotaGoHome) – it is the day-by-day increasing public outcry, and such thing was not happened against any of previous executive president in the country. Can this noise and expectation turn to be a reality, and how? For that purpose, we can roughly use the formula of Opportunities, Challenges, Weaknesses, and Threats.

Gota is the only president in Sri Lanka who has been hailed by his followers as being more powerful than any other Sri Lankan presidents, and he was compared to Hitler in Germany and Putin, who is the today’s Hitler in Russia. It has been only 26 months since he came to power. More than half of his term still remains. However, GotaGoHome is the most echoing outcry in the country today.

These response figures also confirm the recent finding by a credible opinion poll that Gota's popularity has dropped up to 10 percent.

Gota has no more legitimate rights…

There is no other President in this country who has been insulted as much as Gota. Hundreds of political jokes denouncing Gota spread through social media every day. Thus, in the public opinion, Gota has no legitimate right to remain in office today. He is a president who has failed in every aspect.

GotaGoHome was the demand of tens of thousands of people who were recently taken to the streets by the Samagi Jana Balawegaya and the Janatha Vimukthi Peramuna and, it is in line with the strongest opposition in our society. Only those two political parties and, to a lesser extent the Frontline Socialist Party (Peratugami), may have the power to besiege the presidential Secretariat.

That is the reality we must accept. At present it seems that the power to send Gota home can be concentrated on these two main political parties.

This does not mean that other political parties and organizations, as well as civil forces, alternative media, trade unions, public organizations, and religious groups should be ignored.

It is clear that there is an opportunity in the country at the moment to send Gota home.

But Gota has the power of constitutional law with executive powers. He also has a majority in parliament. He cannot be legally overthrown. There is no idea or possibility in Sri Lankan politics to overthrow him by violent force. As I think, it is not necessary.

The economic, social, and political crisis facing the country is unprecedented. There are no easy solutions. As Harini Amarasuriya fearlessly put it, there are no cheap and easy solutions to the current crisis. No opposition party has a magic wand that can solve problems after coming to power. The crisis is not limited to the economic sphere. The crisis is also acute in the socio, and political spheres.

Even if Gota resigns tomorrow and Anura Kumara or Sajith Premadasa becomes president, it will be difficult to find the change the people want and expect, as finding the elixir. That is because the aspirations of the people of this country do not match the local and global realities.

Since the 1953 hartal, there has been no popular uprising in Sri Lanka over economic issues that could send a government home by force. The 1953 hartal was caused by economic problems such as removal of rice ration, and school lunch, and increase in postage and train fares.

In 1953, there were also a militant trade union movement that could stop ports and trains, and people who were ready to bake ‘Roti’ and eat on streets.

Lanka Samasamaja Party took the lead in calling for a hartal, regardless of political differences and factionalism. It united with Philip's Revolutionary Samasamaja Party and, Communist Party to form a left-wing alliance. The chair of the meeting convened at Galle Face to declare the hartal was handed over to Bandaranaike. The Federal Party also expressed support for the hartal. There was also an uprising even in Jaffna.

Compared to 1953, the economic crisis facing our society today is enormous catastrophe. Essential commodities rose 30 percent overnight last week. The queues that beat the 70-77 era can be seen all over the country. The death due to collapse of three senior citizens who had been queuing for hours to buy a bottle or two of kerosene symbolizes the extent of the crisis. Eruption of anti-government hatred in the fuel queues could be seen last two or three days.

There is enough pressure and anger for the social uprising that must go beyond a hartal.

But the other people who sent the three dead men to the morgue go back to wait in line for two or three hours. The women and men of Kandegoda, Ambalangoda, who witnessed the sparks of fire in the 1953 hartal, are today holding empty gas tanks around a large field and staring out blankly as empty tanks.

There is no any civil social culture or civil social leadership in Sri Lanka today that can mobilize the masses outside the political parties, as there was in the Arab Spring or in the Philippines against the Marcos.

Even the unions that brought the Rajapaksa government to its knees in the recent past have not yet entered the struggle. There are also sharp divisions between civil social movements and political movements.

The Rajapaksas are in crisis and unable to control the country. For the purpose of filling that gap, there is so far no any merger of forces that move separately but ready to strike together. Meanwhile, social protests are spreading unorganized. Protests are growing. Anger rages.

The Rajapaksas may be checking whether Hitler or Putin is better suited for a more repressive regime as a solution to the growing situation. This is a remote capability. Given the reluctance of the Rajapaksas and their political allies to relinquish power, we must not ignore the possibility of executive-repressive rule by them.

The Rajapaksas also want to confine the rising protests to a racist framework. For that purpose, the Wimal-Vasu-Gammanpila alliance has the potential to emerge as an invisible force of the Rajapaksas. Perhaps the Rajapaksas are trying to prolong by formation of a nominal national government.

Although the Rajapaksas like it, there is no room in the country for a Gnanasara-Hitlerism choice. The Rajapaksa regime has failed and lost its legitimacy. The time has come to overthrow it. Social unrest is growing. If this opportunity is simply abandoned it may not be possible to capture it again.

If the situation continues to escalate into anarchy, the Rajapaksas will have no choice but to become more repressive.

What we need to do is eliminate weaknesses so that threats can be overcome to meet the challenge posed by the opportunity. That is the day's challenge the political and civic movements facing today.

That is, to build an ongoing struggle on the ground together with all the allied forces that can be mustered to send the Rajapaksa government home. But for that, it is necessary to find greatest common factors that can change the political roots of the crisis Sri Lanka is now facing.

This will require building agreements with trade union movement as well as Tamil and Muslim communities in the Upcountry, North and East. The minimum slogan that all protesting forces can unite may be that of getting parliament to agree for a new general election immediately.

If agree so, all forces can organize continuous peaceful and democratic campaigns to win a general election.

Whichever party gains more power, the executive powers of the presidency should be curtailed as the first and foremost task of a new parliament; parliamentary democracy and independent commissions, the judiciary and the Attorney General's Department must be strengthened; To this end, civil society and political parties can reach an agreement to bring in a constitutional amendment that goes beyond the 19th Amendment. It is essential to ensure that the 2015 betrayal of good governance does not recur with regard to constitutional change and the abolition of the executive powers of the president.

Recapture of executive powers by parliament may be the most widely supported slogan today. In the face of the enormous devastation wrought by the executive powers of one single man, there is no justifiable reason to continue that system.

The new parliament, elected by the people at a general election, will be tasked with proposing immediate and long-term solutions to the current crisis.

In my opinion, these are the issues that need to be seriously discussed by civil and political society today in order to make GotaGoHome a reality that goes beyond a slogan. These ideas are presented to contribute to such a discussion, not as a perpetual formula.