Buses in Mirihana set on fire by Army Intelligence 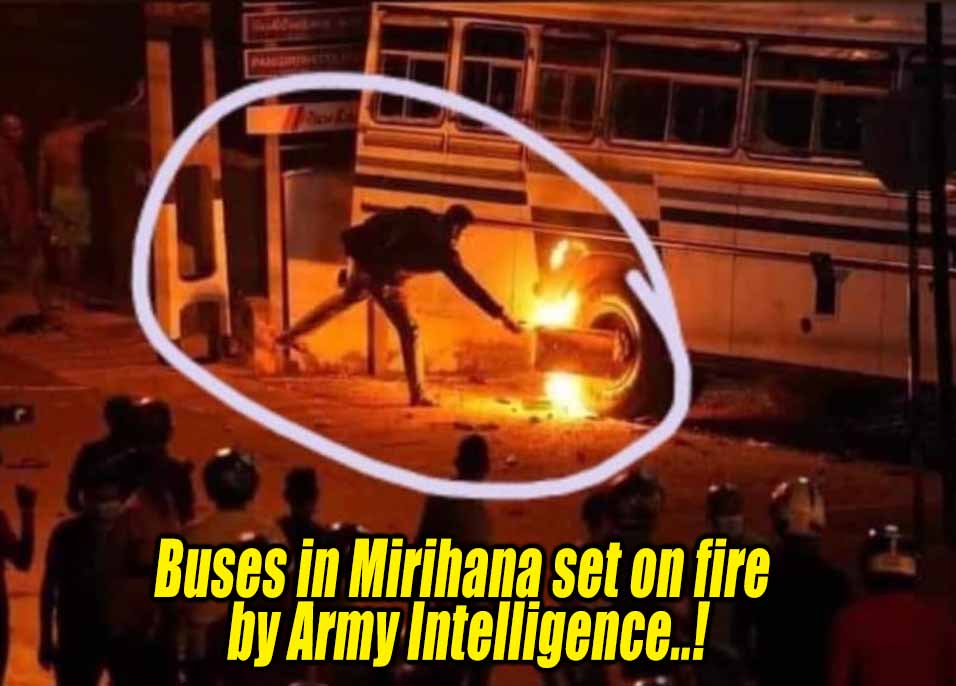 (Lanka-e-news -03.April.2022, 6.30 am) Senior security observers say that it is confirmed that the vehicles were set on fire by the Army Intelligence after the troops arrived and disembarked during the Mirihana mass struggle.

From those videos it is clear how one person instantly set fire to a tire. That way the tires do not catch fire instantly. Fuel does not ignite instantly. Defense observers say the army has special chemicals that can ignite a fire at such an instant. The seniors say they use them to destroy enemy bases, and that such chemicals are not in general stores or in the possession of the general public or private security companies and are only in the possession of the security forces.

Accordingly, the person shown in the video had used such an army igniting chemical to set fire to vehicles during the peaceful protest held in Mirihana that day. When only one person set a bus on fire, the police did nothing because they knew who it was.

As events unfolded that day, protesters surrounded Gota's house for about an hour. Suddenly shutting down the surrounding telephone signal towers. Then all live broadcasts stopped. At the same time the power was cut off. Then a bus caught fire. Then came the rain of tear gas. It was only after that the people became angry.

All of these events have been videotaped. When all is said and done, it is clear that the government used arson to repress the people. Is it weird to set fire to a bus to save power from a beast that killed three hundred and paralyzed five hundred to come to power? With the Rajapaksas fleeing the country, it will not be difficult to catch them if all those responsible for this conspiracy are not escaped.

-By a Special Security Correspondent.