A powerful country intervenes...! Gota to leave in 4 months...! Presidency will also be abolished...! Help from powerful countries...! SJB and Karu ready to take over the country as per proposal of Bar Association...! 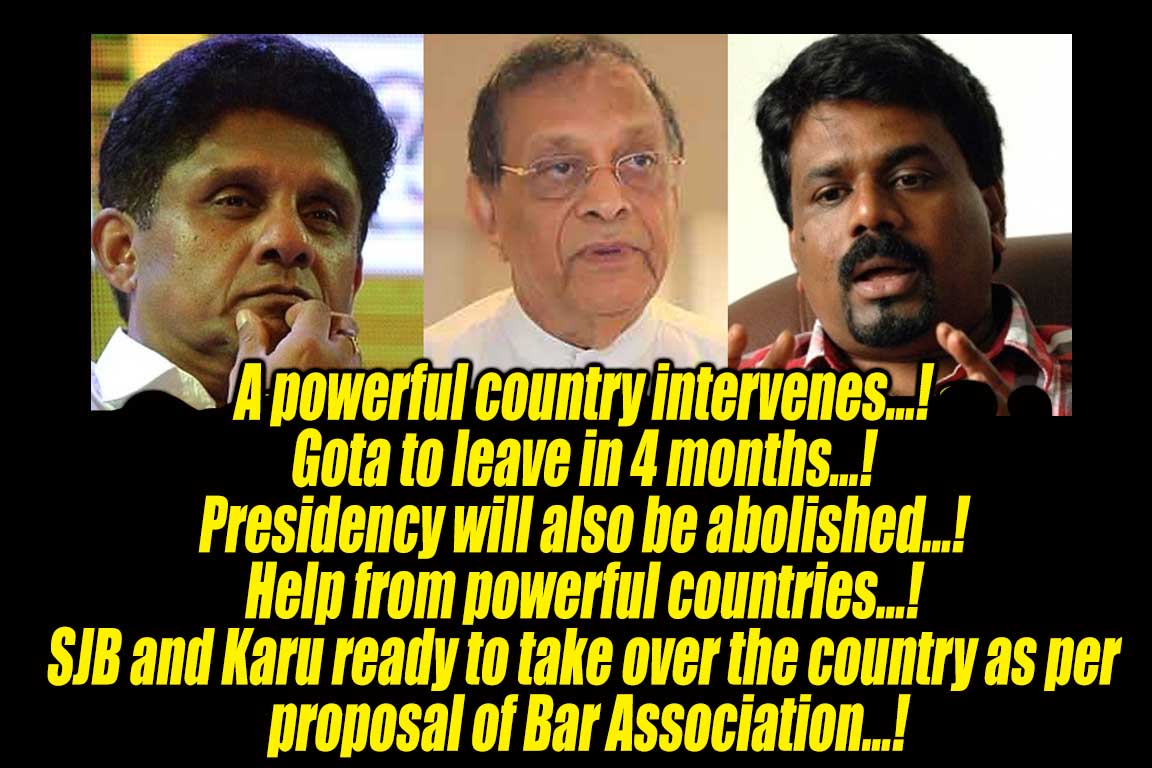 (Lanka-e-News -08.May.2022, 6.20PM) The Samagi Jana Balawegaya (SJB) has moved away from the stance of both SJB and Jathika Jana Balawegaya (NPP) that they will not support an interim government as long as President Gotabhaya is in office, and returned to a more moderate position. The SJB yesterday(07) officially announced that it will be working on the proposal of the Bar Association of Sri Lanka (BASL) to resolve the current serious national crisis in the country.

The proposal of the BASL stated that the executive presidency should be abolished and that the necessary legislation should be enacted within six months and implemented within a maximum of 15 months.

"We consider the proposal by the BASL for the abolition of executive presidency in order to remove the current president from the office as a basic requirement for resolving the present national crisis.

Accordingly, it was decided to extend the support of SJB and SJB-led Samagi Jana Alliance for a national program based on the proposal of the BASL to stabilize the economy and resolve the burning issue of the people expeditiously.”

A guarantee by a powerful foreign state …

According to the report received by LankaeNews internal information service, the reason for the relaxation of the SJB's stance was due to a guarantee given by a powerful foreign state. The said state has held final talks with President Gotabhaya, Sajith Premadasa, and Karu Jayasuriya yesterday. Gotabhaya has promised to that powerful state to step down from the presidency within four months. In the meantime, some of the executive powers needed to resolve the crisis will be tasked to the Parliament. The powerful state has given such assurance to the Leader of the Opposition, and Karu Jayasuriya. (The National Movement for a Just Society led by Karu Jayasuriya had earlier called for the immediate implementation of the BASL resolution to resolve the crisis.)

In the meantime, the proposal of the BASL will be implemented. The United States, the European Union, India and other major powers have pledged their patronage to the national program and support to Sri Lanka in overcoming the crisis.

This is the background of the SJB's official announcement yesterday. If the NPP think about the country, it cannot oppose the proposal of the BASL.

All political parties must bear in mind that all these were due to the oppressed masses taking to the streets independently and forcing the Rajapaksas to go home.

However, the proposals made by the BASL, which has no any political affiliation, to overcome the crisis in Sri Lanka are as follows.

The economic crisis which has resulted in spiralling inflation and shortages in essential goods such as fuel, gas, medicine, and electricity is the gravest Sri Lanka has faced since Independence. The crisis has led to loss of public confidence in the leadership and institutions of the country and demonstrated the failures of the Executive Presidency.

The lack of meaningful Parliamentary oversight over the Executive especially after the enactment of the 20th Amendment to the Constitution, allegations of lack of accountability and transparency and the perception of the existence of rampant corruption have led to the present political unrest. The twin political and economic crises once again highlight the importance of strengthening institutions and their independence from political interference with the People demanding a “system change” – i.e. just and equitable governance through strong, independent institutions; constitutional safeguards and appropriate laws and regulations to eradicate corruption and nepotism in Sri Lanka; and leadership based on meritocracy with a common Sri Lankan identity whilst respecting the diversity of its People.

The economic crisis and ensuing political instability have led to Members of Parliament from the Government functioning independently; the entire Cabinet of Ministers except for the President and Prime Minister resigning from office and calling for other political parties to join the Cabinet; political parties in the Opposition declining to do so on the basis of the weakened position of the Legislature after the 20th Amendment; an impasse of nearly two weeks to appoint a Cabinet; and no productive debate or action on the national economy by the Legislature. Mass protests by the public have intensified and calls being made for the resignations of the President, the Prime Minister, and a display of contempt towards all 225 Members of Parliament.

On 12 April 2022, the Ministry of Finance made the unprecedented announcement that “the continued normal servicing of external public debt obligations has become impossible” and that it was “the policy of the Sri Lankan Government to suspend normal debt servicing”. The Ministry also announced that “… the Government has approached the IMF for assistance in designing an economic recovery program and for emergency financial assistance.” Several leading economists, the Chambers and Trade Associations have highlighted that approaching the International Monetary Fund (IMF) for assistance is one of the best options to resolve the present economic crisis and have stressed that political stability in the country is essential for a successful negotiation with the IMF.

The BASL stresses that without political stability it would be virtually impossible to resolve the economic crisis. The existence of a token Parliamentary majority and the appointment of new Ministers will not in the opinion of the BASL resolve the present political instability. Neither can political stability be restored by the use of force or strong-arm tactics. The need of the hour for the country is for all political parties represented in Parliament to act in the best interest of the country and forge a bi-partisan consensus on the national economy to carry urgent domestic reforms and build confidence in bi-lateral and multi-lateral partners.

As Sri Lankans across the socioeconomic spectrum still struggle to afford basic necessities, which have skyrocketed in price with the plummeting value of the Sri Lankan rupee and the death toll at queues for essential goods rise, the political demands that have accompanied economic hardship have still not been satisfied.

It is in these circumstances that the BASL presents its proposals as a means of overcoming the current impasse.

1. To create political, economic and social stability in the country.

2. To create an environment to address the fundamental problems that have brought about the current crisis (and imperil future reforms).

3. To restructure external debt and enter into appropriate programs with multi-lateral institutions including the IMF and for that purpose to appoint the financial and legal advisers and negotiate a debt standstill pending debt restructuring.

4. To obtain bridging finance. The bridging finance together with the savings arising from the debt standstill to be used to procure uninterrupted supply of essentials to the People until such time the debt restructuring, and the IMF program is in place. This will eliminate the shortages in power, fuel, gas, medicines, food, etc.

5. To create an environment to combat corruption and to ensure accountability and strengthening independent institutions.

A stable Government with the ability to implement reforms domestically and the ability/credibility to negotiate with the IMF, other multilateral agencies, and friendly countries to help Sri Lanka get out of the economic crisis.

1. All actions must be consistent with the Constitution and the relevant legal instruments and transparency. Transitional provisions that are being recommended are purely due to the exigency of the situation and should not be used as a precedent.

3. In addition to the provisions of the 19th Amendment, the 21st amendment should stipulate that:

i. the appointments of the Governor of the Central Bank of Sri Lanka and the Monetary Board should also be done with the approval of the Constitutional Council;

ii. the appointments of the Secretaries to the Ministries, Governors, Ambassadors and Heads of Missions to be done on the advice of the Prime Minister in consultation with the Cabinet of Ministers;

4. Upon enactment of the 21st Amendment to the Constitution all Secretaries to Ministries to be appointed and all independent Commissions other than the Judicial Service Commission be reconstituted.

5. The President should not hold any portfolio (as stipulated by the 19th Amendment to the Constitution).

7. Establish an Interim Government of National Unity consisting of 15 Cabinet Ministers. The Prime Minister to be a Member of Parliament who is able to establish a consensus among all political parties recognised by the Speaker in Parliament on the national economy and to enact necessary reforms. If there is no Member of Parliament who meets this criteria due to the exigencies of the situation a vacancy created by the resignation of a National List MP may be used to facilitate the entry into Parliament of an individual who meets this criteria where there is bi-partisan consensus to appoint a person who is not presently a Member of Parliament as the Prime Minister, even if such individual’s name did not appear in the original List submitted to the National Elections Commission.

8. For the Interim Government in consultation with all relevant independent, apolitical Professional/Trade/Civil Society organisations to appoint an independent Advisory Council consisting of 15 qualified professionals from disciplines corresponding to the 15 Ministries or relevant to the national economy. All major policy decisions of the Government to be taken in consultation with the Advisory Council in a transparent manner.

b. Refrain from implementing the recommendations of the Presidential Commission of Inquiry appointed to Investigate Allegations of Political Victimization during the Period Commencing 8 January 2015 and ending 16 November 2019 appointed by Gazette (Extraordinary) No. 2157/44 of 9 January 2020.

10. The Cabinet of National Unity shall prepare a Common Minimum Program (CMP) in consultation with the Advisory Council. The CMP will be tabled in Parliament for its approval and implementation of the CMP will be the responsibility of the Cabinet of National Unity. The CMP should lay special emphasis on caring for the most vulnerable people of Sri Lanka at this time.

The CMP will inter alia

i. debt restructuring, negotiating an IMF program and obtaining of bridging finance from bi-lateral partners pending the IMF program;

ii. immediate resolution of the shortages of essential goods and services;

iii. divesture and privatisation of State assets and awarding tenders including ongoing procurements to be conducted in a transparent manner;

iv. uphold the Rule of Law and in particular ensure that State actors uphold the rights and freedoms of the People and advance Sri Lanka’s Human Rights situation;

v. adopt a foreign policy which supports the national interests;

vii. enact necessary amendments to the Monetary Law or promulgate new legislation to strengthen the independence of the Central Bank of Sri Lanka.

viii. enact with bi-partisan support and input by professional organisations and trade associations necessary legislation to develop the national economy and attract investments;

ix. strengthen the Consultative Committees of Parliament and Sectoral Oversight Committees and invite professional organisations and trade associations to attend such meetings;

x. complete all necessary reforms relating to the conduct of elections expeditiously (especially those which have been delayed); devise methods to conduct such elections in a cost-effective manner (i.e., on the same day); and set a time frame for conducting elections other than a Presidential or Parliamentary election; and

xi. consider the proposals submitted by the BASL on the Prevention of Terrorism Act (PTA) submitted to the Minister of Foreign Affairs by letter dated 22 December 2021 and amend the same;

xii. Take steps to improve the ease of doing business.

11. The CMP shall include the abolition of the Executive Presidency.

12. A budget presented by the Interim Government will be based on the CMP.