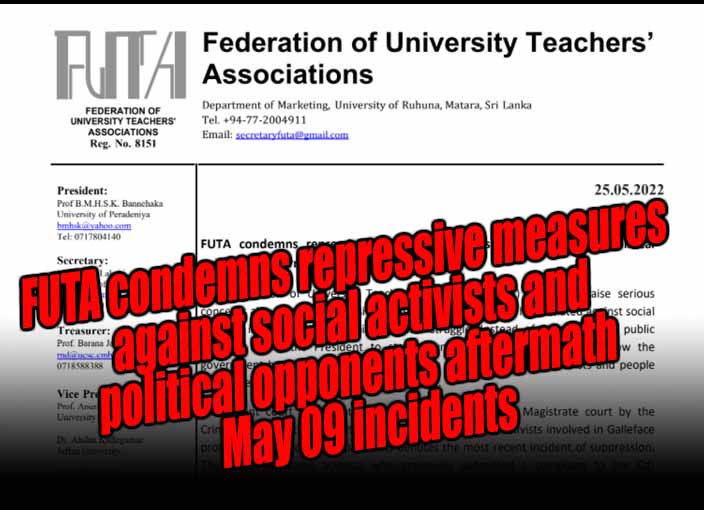 (Lanka-e-News -27.May.2022, 10.40AM) The Federation of University Teachers Association (FUTA) wishes to raise serious concerns about various repressive measures the government has initiated against social activists involved in the ongoing peoples struggle. Instead of respecting the public demand urging the President to step down, it is regrettable to notice how the government has launched a vicious campaign to intimidate social activists and people who raise their voices against the government.

The recent court order obtained from the Colombo Fort Magistrate court by the Criminal Investigation Department (CID) ordering several activists involved in Galleface protests to surrender their passports denotes the most recent incident of suppression. These are the same activists who previously submitted a complaint to the CID requesting an impartial investigation on the violent assault pro-government supporters carried on against the peaceful protesters at the Galleface green protest site on 9th of May. The CID has ordered them to surrender their passports, on the ground that such a measure is required to continue investigations. Imposing travel restrictions on activists who have complained to the police on behalf of the victims of the May 09 pro-government assault appears to be a highly problematic measure.

This particular order of the CID should be viewed as a part of a larger repressive tendency that is unfolding since May 09 incidents. The police has so far arrested approximately 600 individuals on the suspicion of participating in various violent activities that erupted throughout the country aftermath the assault on the Galleface protest site. The FUTA is concerned about the highly politicized nature of these so-called investigations and arrests. It has been drawn to our attention that local politicians attached to the ruling Sri Lanka Podujana Peramuna (SLPP) party are preparing lists of their political opponents accusing them of participating in violence.

Although we are not against initiating legal action against any individual that has shown criminal behavior, we thoroughly emphasize the need of investigations to be transparent and impartial. The involvement of local politicians in directing the arrests, and how the ruling party attempts to frame social activists who were active in peaceful protests in various local areas as offenders seriously undermines the foundations of rule of law and democracy. In addition to the brutal police attack that was unleashed against the peaceful protest march organized by the Inter University Student’s Federation (IUSF) on 19th of May, intimidation of activists and making politically motivated arrests signifies the rise of a new wave of authoritarianism.

Sri Lanka is facing the most severe economic, political and social crisis it has faced since independence. While the general public; especially the economically disempowered sections of the society are enduring immense suffering due to economic pressures such as rising cost of living, fuel, medicine and gas shortages and frequent power cuts; the current regime including the President continues to govern with impunity without being held accountable for the serious mismanagement of the economy that has brought an unprecedented burden on the people. The political establishment remains in power disrespecting the demand of the people who urge for the removal of the President. Social unrest that we witness today throughout the country; from people blocking roads due to gas and fuel shortages and spontaneous protests of masses indicates the need of changing the existing state of affairs. The FUTA firmly believes that such change cannot be anticipated unless and until the current President who is largely responsible for the deteriorating conditions in the country becomes accountable to the public and renders his resignation respecting the people’s will.

Unfortunately, without following that obvious path to reaffirm public confidence on the political order, the government seems to be drifting more and more towards repression and consolidation of authoritarian policies. We thoroughly condemn the alarming emergence of repressive practices that have taken place since May 09 incidents. The right to dissent is non-negotiable in a democratic society. While calling for an immediate end to the intimidation of social activists and political opponents, the FUTA urges the government to respect people’s demand and act responsibly without aggravating further social turmoil.