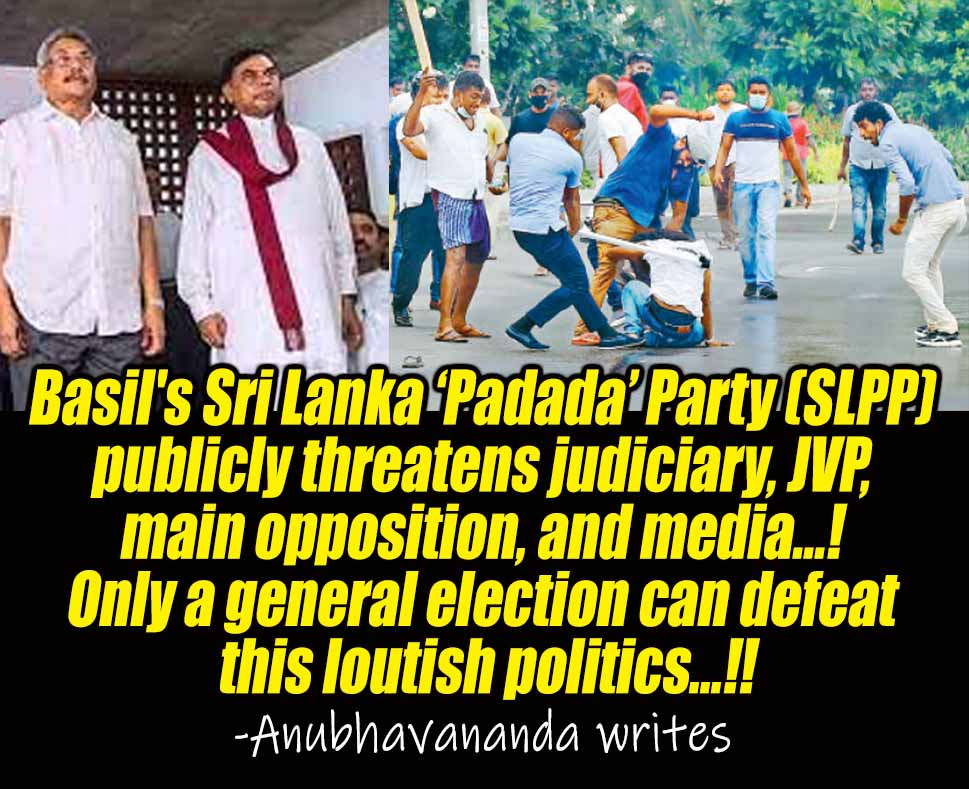 When Basil Rajapaksa formed the Sri Lanka People’s Party (Pohottuwa), it was based on the rural lumpen political class they had molded since about 2004. In fact, Basil's new party is the Sri Lanka ‘Padada’ Party. Basil, who won the local government election through this loutish lumpen political class, gives nominations to the leading bastards among them for the last general election. As a result, dozens of lumpen political bastards including Sanath Nishantha, ‘boralu’ Indika, ‘Ampare’ Weerasingha, Tissa Kuttiarachchi, Milan Jayathilaka, and Ajith Rajapaksa become Members of Parliament. They make no effective contribution other than shouting obscene words in the parliament chamber. Their sole purpose is to expand their illicit rackets using parliamentary privileges.

9/5 offensive against the peaceful protesters was led by this bastard lumpen political class of Basil. They had to face more or less counter-violence against the violence they started and unleashed against a peaceful struggle. But it became clear during the May 17-20 parliamentary session that these bastards had failed to understand the message given by civil society.

During those four days, the vast majority of the Sri Lanka ‘Padada’ Party members told the country that they do not count the citizens of the country at least for a penny; mass protests are not relevant to them because they have the majority power in parliament. Prasanna Ranatunga disclosed that the main role of the new cabinet is to provide new houses to the ministers whose houses have been destroyed. During the four-day expensive parliamentary session at a cost of Rs. 400 lakhs, the majority of the Sri Lanka ‘Padada’ Party cried out for the assassination of one of its members, and the damage to their homes. They shed tears over the inconvenience caused to their children.

People's representatives who talk only about their stomachs…

In this country, only the ministers and MPs of Sri Lanka ‘Padada’ Party have children! In this country, only their houses have been gutted by fire! So as a country, we immediately should act to comfort them. They do not care why the people of the country are protesting in the streets. They have no problem with people dying when gas cylinders explode. They are not aware of the people who die in the queues. The majority of the people in the country today are helpless and unable to get at least a meal per day. Children suffer from hunger. Helpless patients die without medication. Let us keep medications aside; hospitals do not have even the stitches needed for cesarean operations. Babies die on the highway without fuel to get to a hospital. Two children have already died.

But the only problem for the Sri Lanka ‘Padada’ Party ministers and MPs is the inconvenience they face. They mourn their dead MP but have no concern about the 10 civilians who died, and the civilians who are already fighting for their lives in the intensive care units. in this struggle when Rambukkana Chaminda Lakshan was killed by the police, they did not express a single word of regret. They have no sympathy for the common people.

How Rajapaksa terrorists destroyed hundreds of houses in the past…

The Rajapaksa regime killed its political opponents and destroyed thousands of their homes and property. LankaeNews, Sirasa, Siyatha, Udayan, and many other media institutions were set on fire and destroyed.  Although compensation has not been paid to these institutions, at least a proper investigation was not carried out.

"My house in Madampe, Chilaw and my office in Anamaduwa were set on fire due to political terrorism on 04.10.2009.  Rajapaksa henchmen were responsible for it. My house was set on fire by a gang of thugs including Sanath Nishantha. Now I will not explain how much the pressure of pain I and my children were felt at that moment. However, I, as a Member of Parliament, sought to explain to the Parliament the inhumane act perpetrated by political terrorism. Then the Speaker was Chamal Rajapaksa, who had recently presented a great tribulation to the Parliament. Chamal Rajapaksa even stopped the telecast while I was explaining the situation I was facing at the time. This was done to prevent the world from knowing the truth.”

“However, Chamal Rajapaksa was in the Supreme Speaker's chair when I explained the situation I was facing. However, he is not in that seat today. But today Chamal Rajapaksa has had to tell about the grievances that have befallen them sitting on the same row of seats I was in then. That too is a travesty of fate.”

“On 02.11.2009, I, along with my family members, staged a peaceful protest alleging injustice near the entrance to Parliament. At that time Speaker Chamal Rajapaksa entered Parliament after covering myself and my family with a full force of police. It is clear that his purpose was to enter into Parliament being invisible to us.”

“However, he did not give me a proper opportunity to present the grievance to Parliament, even under parliamentary privileges. That is their democracy."

Do justice to all victims of Rajapaksa political terrorism..!!!

Palitha Range Bandara says that it was not only his house that was set on fire by the Rajapaksa government from 2005 to 2015. He stressed that justice should be done to all victims of Rajapaksa political terrorism.

“From mansions to shanties, all the dwellings in our country are valuable and noble resources that provide shelter to the people. Living in all those places are human beings. It is very clear that the Rajapaksas failed to realize that. Also, people like Chamal Rajapaksa have realized that grief only after their mansions were set on fire.”

“Today, those who set fire to my house and other houses and those who instructed to do so are facing ‘Dittadammavedaneeya Karma’. Such is the fate of Sanath Nishantha and Jagath Samantha who set my house on fire that day. The very people who put them in power have set fire to their homes and dragged them into the streets. The same fate befell on the Rajapaksas who were instructed to do various dirty things, and today they have to live trapped in bunkers.

Surprisingly, people like Chamal Rajapaksa, who looked away from the sorrows of others, are now talking on tragedies and shedding tears. If such an appearance had been made for the suffering of others then, they would not be accused in this way today. This is ‘Dittadammavedaneeya Karma’!

According to the UNP General Secretary, the ministers of the Sri Lanka ‘Padada’ Party has reaped the harvest of what they sowed. But those still in power do not understand this reality. During the four-day parliamentary session, they cried out about the situation they and their families were facing and blamed the opposition with a strong animosity. But they completely ignore their contribution to the crisis. Instead, they have turned the JVP and the media non-aligned to Rajapaksas into enemies.

On the very first day of Parliament after the 9/5 attack, W.P. D. Weerasinghe of Ampara grabbed two mobile phones of Sirasa journalist and President of the Parliamentary Media Association Kasun Samaraweera, and Prageeth Perera of Swarnavahini. While doing so he said, "Give your phone ‘Paraya’; you showed it hour by hour, so the people set our houses on fire; you are the ones who do everything.” Gampaha ‘Boralu’ Indika pushed Kasun against the wall and Channa Jayasumana (A-natha) supported the attack.

Sanath Nishantha who is on bail jumps to attack Vijitha Herath…

Sanath Nishantha, who is out on bail, tried to attack Vijitha Herath when the latter came forward to respond to the allegations made against the JVP in Parliament about the burning of the houses of Sri Lanka ‘Padada’ Party MPs. Intoxicated by the majority in parliament, they still think that state repression, violence and intimidation can stifle the dissent.

Representatives of the Sri Lanka ‘Padada’ Party challenge the court…

Another dangerous trend that emerged in the post-9/5 parliamentary sessions was the despicable attack on the judiciary by representatives of the SLPP. Representatives of the Sri Lanka ‘Padada’ Party have strongly objected to not receiving approval from lower courts for enjoining orders issued, and granting bail to protesters arrested by police. They accused the decisions of the lower courts influence the "terror" in the country. They also criticized the Bar Association's free of charge representation for protesters who were unjustly arrested. This is clearly a blow to the independence of the judiciary.

This attack on the judiciary is not a coincidence. Also, the controversial letter written by Retired Maj. Gen. Jagath Alwis, Secretary to the Ministry of Public Defense, to the Chief Justice Jayantha Jayasuriya contained allegations made by representatives of the Sri Lanka ‘Padada’ Party in Parliament. It is therefore clear that this is an organized operation by the government to intimidate the judiciary.

Neither Basil Rajapaksa nor his Sri Lanka ‘Padada’ Party has learned lessons from the mass protests. They act in an arrogant manner that they can act disregarding the public opinion as they have a majority in Parliament. In the Deputy Speaker's election, Basil reaffirmed this by taking the field for a lumpen character, Ajith Rajapaksa, on behalf of his party. The new Prime Minister Ranil Wickremesingha has assured that the democratic qualities of the 19th Amendment will be presented through the 21st Amendment. But it is Basil's Sri Lanka ‘Padada’ Party that has the votes to pass it in Parliament. It is as sure as day follows night that Basil and his ‘Padada’ party will not support any amendment that ends the Rajapaksas' dictatorial frenzy.

Ranil is today a political prisoner of Basil and his ‘Padada’ Party. President Gotabaya as well as Basil's ‘Padada’ party have already opposed proposals to abolish both the president's unlimited powers, and dual citizens to represent parliament. Attempting to make democratic reforms with them is a futile exercise, like a fox chasing after a goat until the latter’s ‘balls’ falls down. President Gotabaya, as well as Basil’s ‘Padada’ party, does not see any value in democracy. Ali Sabri, a political scoundrel who cried out in Parliament recently for his sincerity, presented the 20th constitutional amendment on behalf of the SLPP and asked, "Can independent commissions be eaten?"

If we want to implement political, economic, and social reforms in the country, we must first go to the general election and defeat the Rajapaksa family politics and Basil's Sri Lanka ‘Padada’ Party altogether and liberate this country from Rajapaksa terrorism. It is the only solution and unfortunately there is no any other solution today.