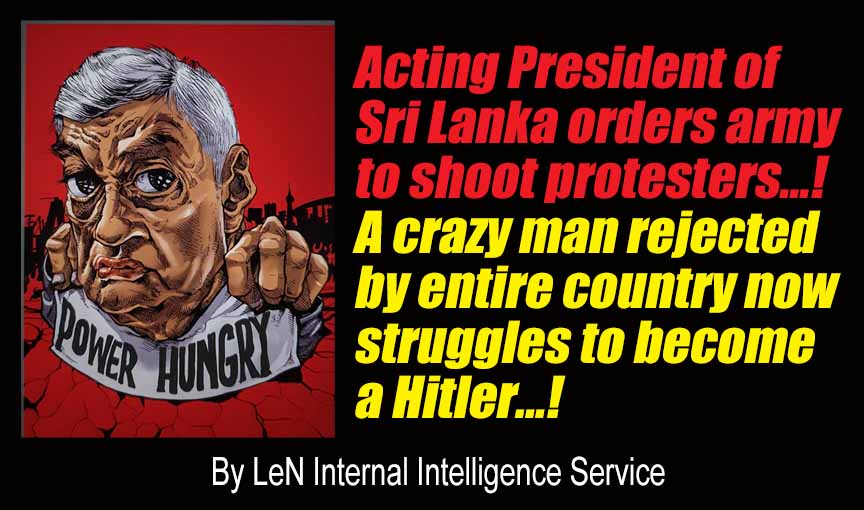 (Lanka-e-News -18.July.2022, 11.50PM) Acting Sri Lankan President Ranil Wickramasingha has called a large number of army personnel from the north to the south including Colombo tomorrow (19) in order to suppress by shooting the people of this country who have suffered a lot of oppression and are currently protesting in the streets.

Once a Buddhist monk called Vendaruwe Upali Thero, the Anunayaka of the Asgiriya Chapter of Sri Lanka, referred Gotabaya Rajapaksha to as a Hitler, and suggested that, if this is the case, he should become one such Hitler and build the nation.

After listening to that advice, six million nine hundred thousand people voted for SLPP party alias ‘Pohottua’ and made Gotabaya Rajapaksha the president.

When Gotabaya said that I need more power to build the country, all the MPs of his party gave him a two-thirds majority power in the parliament. Thus, Gotabaya was a president with the power of two-thirds obtained from people as well as the 20th Amendment, but he did not order the army to shoot the protesters these days, as was done in Rathupaswala and Katunayake during he was the former Secretary of Defense. At the time of the raid on the presidential palace, he ran away saying, “'don't shoot the people, I will run away”'.

But Ranil Wickramasingha, who had nothing but could not even become a member of parliament with the least number of people's will, has started suppressing the people by deploying the army after becoming the acting president.

He removed Brigadier Anil Somaweera and Lt. Col. P. H. G. P. Gunawardena from duty less than 24 hours after becoming acting president. The Secretary of War, Major General Chandana Wickramasinghe, who questioned it, was also removed from his post.

Ranil, who scared the army by indirectly saying, “you watch what will happen if my orders are not implemented.” So, what he is going to do tomorrow (19) is another terrible repression. In Ranil’s view, the people who don't even have a pebble in their hands and take to the streets to demand petrol, gas, medicine and system change are now 'Fascists'.

This rogue does not remember that he became the acting president because of the struggle of those people. We are writing this note because it is the responsibility of Lanka-eNews to reveal to the people the conspiracy that this crazy man who is now doing the job staying in the army headquarters in Akuregoda as he is unable to stay in a normal place.

Gotabaya’s special advice to Ranil before leaving the country...

Before leaving the country, Gotabaya has advised Ranil that Kamal Gunaratna is reliable as the Secretary of Defense and he will follow the orders exactly so continue working with him.

Accordingly, now Ranil gives his frantic orders to Kamal Gunarathna and the latter is going to implement those frantic orders through Vikum Liyanage, who has been recently appointed as the Commander of Army as his confidant.

Ranil Wickramasingha is now afraid that the people will besiege the parliament or carry out massive protests in Colombo on the 20th. So, he has ordered that all additional forces in the north be called to Colombo. It has also been informed that they should move to and stationed in Colombo by the 19th.

Orders given to Jaffna and Kilinochchi Security Force Headquarters...

Accordingly, the Jaffna Security Force Commander, Major General W. M. G. C. S. B. Wijayasundara (Chandana Wijayasundara) has been told to send more troops under him to Colombo. These troops are now coming to Colombo.

Then on the same day, an order has also been issued to Major General Krishantha Gnanaratna, the commander of the Headquarters of Kilinochchi Security Force. Its name has now been changed to Corps I. The forces attached to Corps I are 53 and 58 Divisions, Commando Force, Special Force (SF), etc. The Air Mobile Brigade, and the Special Forces Unit, which specially trained for fighting in urban areas, and the Special Forces’ Motorcycle Unit, all are under 53rd Brigade, are currently coming to Colombo.

Meanwhile, the Western Security Force Commander Major General Pussella has been ordered to cancel the leave of the 14th Division commanded by Major General Wickramasena and put it on alert from the 19th. It is further ordered that, at any time from the 19th, to be ready for operation and setting up of roadblocks in Western Province.

At the same time, Major General Samantha Silva, the Commander of the Central Security Forces Headquarters, has been ordered to keep the 12th and 11th Divisions under him ready from the 19th. Areas like Matara and Hambantota are also belonged to the Commander of 12th Division. The 12th Division is commanded by Brigadier Amarapala who is too tame. As once he was the Director of Psychological operations of the army, his camps in the south have been ordered to deploy plainclothes officers and soldiers among the protesters to carry out psychological operations against the struggle.

Areas like Matale, Kandy, Nuwaraeliya, Badulla, etc., are belonged to the 11th Division under the Central Security Forces Headquarters. There are two brigades, 111 and 112, under the command of Major General Kalpa Sanjeeva. They have also been ordered to be used to suppress the struggles in the above areas from the 19th.

All the above sections have been given orders by the Acting President Ranil Wickramasingha who is hiding in the Akuregoda Army Headquarters through Kamal Gunaratna. The orders are to increase security mobile patrol points from the 19th and to deploy maximum military force to suppress the protests. Maximum military force means nothing other than the shooting. Army officers who do not do so have already been punished.

We have information from second lieutenant to major general…

The Acting President has given all these anti-human and anti-democratic orders despite the fact that the United Nations and its Human Rights Council have warned them not to use force on peaceful protesters, and if they did so, they will not get any help from the world.

Everyone should know that we have the names, official numbers, addresses, mobile phone numbers of all the army officers from the second lieutenant to the major general, who have been entrusted with the arbitrary suppression of the rogue Ranil Wickremasingha, who has no any people’s power or consent or will.

Lessons from officers who was exposed at Hague Criminal Court today...

When the Lasantha Wickramathunga murder case was heard for the first time today (18) at the International Criminal Court (ICC) in The Hague, the Netherlands, the following officers were mentioned. They are Major General Kapila Hendawitharana (former CNI), former military intelligence chief Major General Amal Karunasekera, former State Intelligence Chief, Deputy Inspector General of Police Keerthi Gajanayake. They were exposed as the officers who helped to cover Gotabaya Rajapaksha, who was the real criminal behind the murder. If they are found guilty by the International Criminal Court, no one who ordered them will come forward to save them.

This should be remembered by every officer who follows the wrong orders from the wrong person tomorrow.