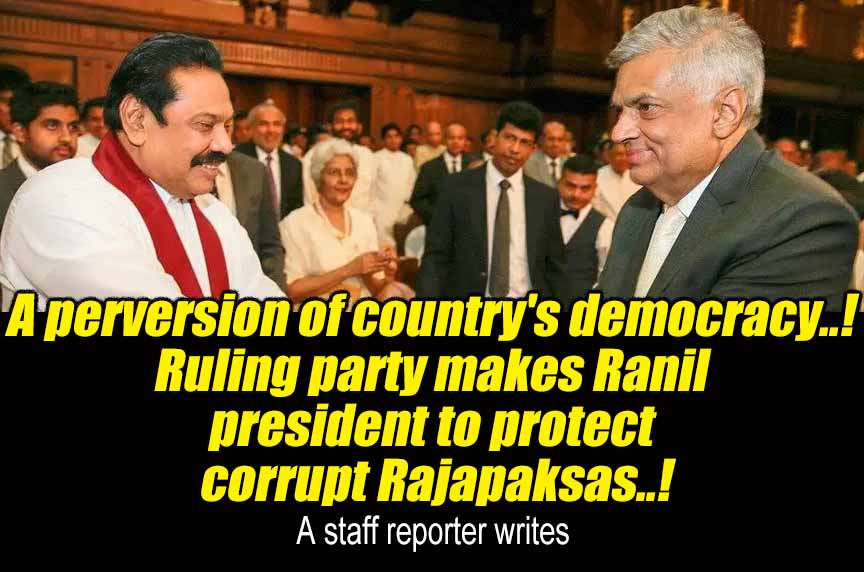 (Lanka-e-News -20.July.2022, 4.30PM) Confirming that Sri Lanka has no Democracy but Kakistocracy (government by stinking politicians), Ranil Wickramasingha, who guaranteed the security of the Rajapaksa corruptors, became the 8th Executive President today with 49 majority votes. It confirmed to the entire world that anyone can even become the executive president of a country, even if he does not win at least a single seat required to come to the parliament, or even when he is rejected by the people.

The secret ballot procedure was held in the parliament today to appoint a new president from the parliament for the rest of the term of a president who had been left the office and run away.

There, Ranil Wickramasingha contested on behalf of Rajapaksas and got 134 votes, and Dallas Alahaperuma contested with the consensus of the opposition parties and got 82 votes, and Anura Dissanayaka contested for National People's Power party and got 3 votes.

According to the number of votes Ranil received, it is clear that some members of main opposition party Samagi Jana Balawegaya have also voted for him, and Ranil, who is supported by India and is afraid of the struggle, has received Tamil votes in the hill country and the north due to Indian influence, political critics say. It is also said that Dallas the opposition consensus contester received only 3 votes from the TNA party. Critics also say that Ranil has received the same number of votes from Sri Lanka Freedom Party (SLFP) members like Nimal Siripala, and Mahinda Amaraweera.

The new MPs of ruling SLPP party have also voted for Ranil because of the latter’s assurance that they would quickly be compensated for their houses that were burnt and that the parliament would not be dissolved until the pension period is over. It is said that Ranil's new prime minister is his classmate Dinesh Gunawardana.

No way to prevent a bloodbath…

Ranil, who became the president by the SLPP (Pohottu) votes, will never be able to do anything but act as a puppet of the Rajapaksas. He can also serve as president from Akuregoda military headquarters. According to international financial aid groups, Sri Lanka needs to form an all-party consensus government but Ranil will not be able to fulfill the process.
That is, the country will not receive the necessary support for its  economic crisis. As there is a strange president who has no consensus because he does not have the consent of the people who voted for the Phottuwa or Telephone or Compass. The Sri Lankans abroad will also continue to follow the same Undial system to send their money here. Country will not even get some of the dollars it needs?

Since India helped Ranil, Sri Lanka will get more loan aid from India, but the country's crisis will continue as it is. Ranil will never be able to accomplish the constitutional changes that the people are hoping for. That is, the struggle will rise even stronger in the future.

Ranil, who was killing time after losing will of the people, will surely become a dictator more lunatic than Gotabaya due to the post he unexpectedly received.

There are no people to whom he must be responsible, except the Rajapaksas. As a result of Ranil's lunatic acts that may be somewhat similar to Hitler, the Rajapaksa's hands will not be stained with blood. Therefore, it is inevitable that this country becomes a pool of blood.

Ranil, who hangs on to the leadership of the party till the time of his grandchildren, has now become an irresponsible president. Ranil's liberalism will soon be exposed not only to those who still think he is a liberal, but to the whole world.

Shortly after Ranil became President, a court order was obtained that no one can enter beyond the Bandaranaike statue at the Galle Face.

Everything that happens twice will surely happen a third time.

Everyone should now be convinced that the current crisis cannot be solved within the existing parliament without an election. That is, the time has come for the protesters to focus the struggle to win an early election.

-By a staff reporter