SRI LANKA: Emergency regulations must not lead to further crackdown on human rights..! 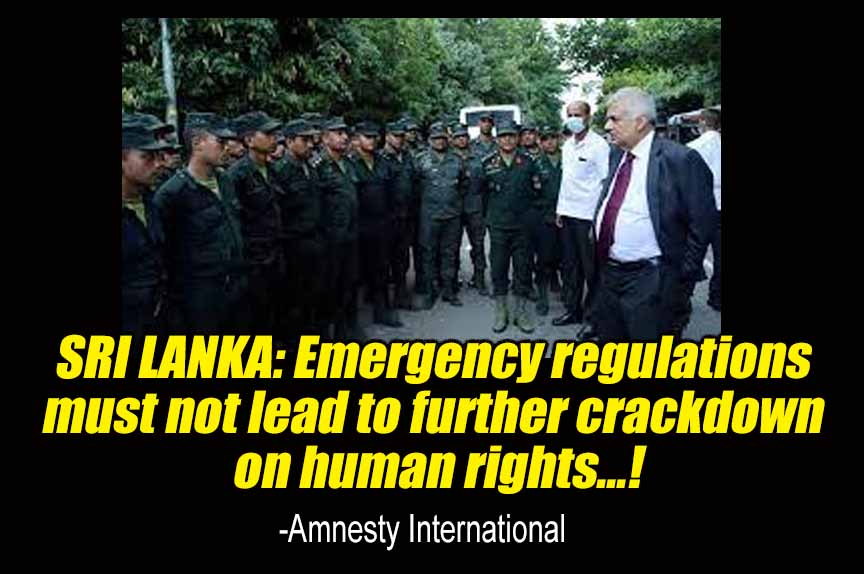 “The emergency regulations brought into operation in the name of public security should not become a pretext for more human rights violations. Amnesty International is very concerned such regulations will serve as a springboard for further crackdown on people's fundamental freedoms, including freedom of expression, peaceful assembly, right to personal security, liberty and freedom from arbitrary detention.”

“The emergency regulations give sweeping powers to the police and the armed forces to search and make arrests of ‘suspects’ without due process safeguards. It levies hefty penalties including life imprisonment for ordinary penal offences like causing ‘mischief’. Detainees can be kept in custody for up to seventy-two hours without being produced before a Magistrate and guaranteed access to lawyers. This prolonged period of custody without timely judicial oversight or the ability to challenge their detention heightens the risk for detainees to be subjected to torture or other ill-treatment.”

“As the new President takes power, he must ensure the people of Sri Lanka can exercise their right to freedom of expression, association and peaceful assembly, including to express dissent and demand respect for their rights. Such emergency regulations have a chilling effect on society. It’s time for authorities in Sri Lanka to stand with its people and not repeat the mistakes of the past.”

On 17 July 2022, a proclamation of emergency was brought into force by the then acting President of Sri Lanka.

On 18 July 2022, Government of Sri Lanka issued notification under Public Security Ordinance for the Emergency (Miscellaneous Provisions and Powers) Regulations, 2022. The English translation for same was posted online recently.

On 20 July, upon the request of law enforcement authorities, a court in Colombo has issued an order prohibiting people from assembling in certain areas of what has been apeaceful protest site since April 2022.

The Sri Lankan authorities have carried out a number of arrests of largely peaceful demonstrators since the beginning of the current wave of protests in Sri Lanka.

Torture or other ill-treatment in custody in Sri Lanka has been documented before by Amnesty International in Mirihana.