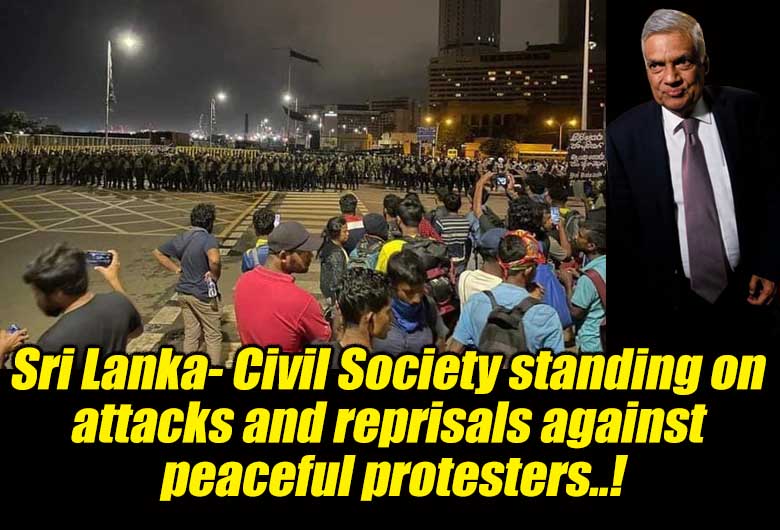 (Lanka-e-News -29.July.2022, 4.30PM)  We, the undersigned individuals and organizations strongly condemn the ongoing attacks including violence, false labeling and legal reprisals against unarmed peaceful protesters by the Sri Lankan government. We call for an immediate end to reprisals against those exercising their constitutionally protected rights to advocate for change.

We are extremely concerned by disturbing developments of abduction, arrest, intimidation, and reprisals against protesters that have been ongoing and increased over the past several days. On 25th July, media reported that Colombo Magistrate Court had issued a travel ban on Fr. Jeevantha and several other prominent human rights defenders involved in the protests and on 27th July, a church was visited by local police, who had told the priest resident there that they had received orders from Colombo to arrest Fr. Jeevantha. On 26th July, a person involved in protests at the Galle Face was arrested from a flight that was about to leave from the Bandaranaike International Airport, after he had legally cleared immigration. Uniformed police officers and reasons for arrest was only given after protest by fellow passengers.

On 27th July, Veranga Pushpika, an active protester at the Galle Face, a former student activist and journalist, was abducted from a bus in broad daylight by men in civil. Police had later acknowledged his arrest, but not given clear indication of his whereabouts to lawyers and the Human Rights Commission for several hours. Also on 27th July, four protesters who had handed over to the police large amounts of money found at the President’s House on 9th July were also arrested. Police had tried to obstruct lawyers from meeting these arrested persons. The same day (27 July) persons in civil claiming to be policemen had visited office of “Xposure News”, demanded the security guard to identify persons in photos and to see CCTV footage and monitored the entrance for around one hour. Xposure News had provided extensive coverage of the raid on Galle Face protest site and violence in nearby places and one of their journalists was amongst the journalists attacked in the early hours of 22nd July. Also on 27th July, a complaint had been made by the Young Journalists Association to the Human Rights Commission about imminent arrest of investigative journalist and human rights defender Tharindu Uduweragedera, who was summoned for questioning by the Criminal Investigation Department (CID) few weeks back.

The protests, on-going since around March 2021, as a result of the economic crisis are due to increasing public realization that the causes of the severe economic crisis leading to shortages of basic essentials including fuel, power, food and medicines are inextricable linked to government mismanagement and corruption. Hence, the protests, which have largely been peaceful, demand accountability and a change in the system of governance. The state response has been disproportionate use of force, threats, intimidation and legal reprisals against protesters and those believed to be leading or organizing the protests. The call for accountability and redress by victims and activists, and the corresponding state repression are not new to Sri Lanka - for years, survivors and human rights activists especially in the North and East of the country have been seeking justice and redress have been subject to violent repression.

On 21 July 2022, Ranil Wickremesinghe was sworn in as the Executive President of Sri Lanka. The appointment of Ranil Wickramasinghe as acting president and subsequently president, has led to increased repression of protests, protesters and those supporting protests. Ranil Wickremesinghe ascended to power following the resignation of President Gotabaya Rajapaksa who fled the country following protests that took place on 9 July.

While he was Acting President he labeled protesters as “fascist” and “violent”; a trend that has continued since. Less than 24 hours after taking over as President, peaceful and unarmed protesters at the protest site in Colombo and in its environs including activists, journalists, LGBTIQ+ community, and people living with disabilities were brutally attacked by military, and men in unidentified uniforms; which included the assault of a BBC journalist by men in civilian clothing who were accompanying the armed forces. Tents and other properties belonging to protesters were destroyed and stolen. Protesters, including those injured, were not allowed to leave the site for several hours. Ambulances, journalists, lawyers, religious leaders were not allowed to reach the Galle Face. Lawyers, journalists and those videoing and photographing were also beaten, subjected to cruel, inhuman and degrading treatment and arrested. Several protest sites outside Colombo have also been attacked and other protest sites have been pressured to withdraw by the police. Such action could not have taken place without the knowledge and sanction of the highest authority. It is the President, as the Commander-in-Chief and the person who declared the State of Emergency, and the Commanders of the Tri Forces who bear ultimate responsibility for the attack.

The attack on 22 July took place while Sri Lanka is under a state of emergency promulgated by Wickremasinghe under Government Gazette No. 2289/40 under the Public Security Ordinance Chapter 40, empowering the military to undertake arrests, interrogate and detain persons as well as clear persons from public places. The declaration of the state of emergency itself is questionable and does not adhere to international standards that regulate the declaration and maintenance of a state of emergency. Further, many powers that should be exercised by the judiciary or should be subject to judicial oversight have been granted to the military without any independent oversight creating room for arbitrary and abusive use of the Regulations which violate many fundamental rights enshrined in the Constitution. Declaration of emergency sent a chilling political message of intolerance of dissent followed by draconian emergency regulations, that can severely restrict and violate freedom of expression, assembly, movement and lead to arbitrary arrests and prolonged detentions. The president’s decision to declare emergency has been now been ratified by parliament, indicating that both the executive and legislature are now on repressive path.

In context of the climate of mis- and disinformation perpetuated by the government, it is critical to note the protesters had already handed over all buildings, except the Presidential Secretariat occupied following the protests on 9 July. A decision to vacate the Presidential Secretariat on the afternoon of 22 July had already been communicated publicly and reported widely in the media. Hence, the use of violence to remove persons from the site is an act of brutality aimed at creating a climate of fear and cannot be justified. While the police have justified the violent action by pointing to a court order that prevents a specific individual and his followers from a 50-metre radius of the statue of S.W.R.D. Bandaranaike statute at the site, the violence took place at sites several metres away from the main protest site. Moreover, video evidence clearly shows force was not used by the armed forces to enforce a court order or in self-defence because they approached or chased persons and brutally assaulted them. Hence, it was an attempt on the part of the state to escalate conflict and has resulted in increasing instability in the country, for which the government and Wickremasinghe as President are responsible. It should be noted that the attack was carried out at night without warning, and protestors fled leaving behind personal possessions, in addition to books from the public library at GGG.

We condemn outright the violence against peaceful protesters. We especially condemn the labeling and mis- and disinformation against those the state portrays as ‘leading and organizing’ protests despite the fact the protests do not have leadership. Despite this civil society activists, pro-democracy campaigners, journalists, human rights lawyers, and clergy have been attacked, arrested and labeled as violent fascist elements by the state in an attempt to suppress dissent. The language used by the government enables a culture of violence and could escalate the on-going political crisis. The most concerning and insidious strategy used by the state is the (ab)use of the law in an arbitrary and disproportionate manner to curtail citizens from exercising their fundamental rights.

We stand in solidarity with the protesters and those who are currently subject to various legal sanctions. We call for accountability for violence against protesters, including on 9 May and 22 July 2022. Legal cases pending against civic activists and sanction includingtravel bans/confiscation of travel documents of protesters and activists must be immediately rescinded.

Peaceful dissent is essential to sustaining democracy and, in context of the current crisis, international credibility. Strengthening political stability requires adherence to the rule of law and dialogue, not repression. The Sri Lankan state and the Wickremasinghe government must immediately cease the attacks on protesters and civic activists and those perpetrating violence against protestors should be held to account. Peaceful protest and defending human rights are not crimes. The government must remember and respect this.