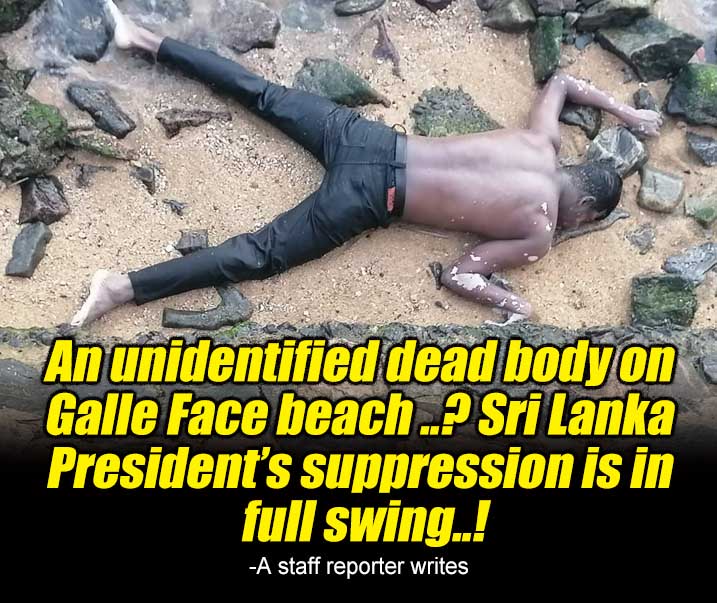 (Lanka-e-News -29.July 2022, 10.00 pm) A dead body of an unknown young man has been washed up the beach in the Galle Face this evening. Colombo Fort Police is investigating the incident. Some say this is suspicious and a tactic to scare Galle Face peaceful protesters.

People should not forget that now the president of Sri Lanka is Ranil Wickramasingha, who was once one of the chief founders of an 'age of terror' wherein anti-government activists were killed, bodies burnt on tire pyres on highways or thrown in rivers.

Meanwhile, Specialist Physician Pathum Karner, a prominent leader of the struggle, was remanded in custody until the 4th of August, intensifying the repression of Ranil Rajapaksa. Dr. Karner was arrested yesterday (28) after he came to the Colombo CCD for inquiry about leading the protest at the Polduwa roundabout near the parliament.

In the court, the police claimed that Pathum Karner was responsible for the theft of arms during the protest.

Three young men were arrested and brought to the court after handing over the sum of 178 lakh fifty thousand rupees to the police. This money was found after Gotabaya had left behind in the presidential palace. They are Abdul Kader Abdul Salim, Jerram Udayakumar, Jerram Jayaraja, Dimbulgastannalage Kusal Dimbulgaswewa. They were produced before the Fort Magistrate Thilina Gamage and released on personal bond of five lakh rupees, but their foreign travel was banned. They were ordered to give statements when required by the police who has to conduct further investigations and inform the court date.

Although it was urgent to arrest the youths, the police has kept the money of one crore and seventy-eight lakh rupees for three weeks without handing it over to the court. Today the money was handed over to the court according to a court order.

Another person remanded as a thief..

Adambawa Mohammad Ismail Mohammad Ishan was arrested and remanded in custody for allegedly stealing an electric iron from the president's house.

Dhanish Ali, 31, a resident of Webada area in Kurunegala, who was abducted by the CID in an Air Lanka flight bound for Dubai, was presented to the court and remanded. The order was also given by the Fort Magistrate Thilina Gamage.

In the meantime, the police is taking fingerprints from the government institutions occupied by people, and giving the prints to the airport to prevent them from going abroad. Fingerprints are recorded in people's passports.

A group of civilians who claimed to be police officers came to the "Exposure News" office on the 27th forcefully, and spent about an hour saying they have come to identify the people in the photos, and viewed the CCTV footage. "Exposure News" is a media organization that give extensive coverage of the violence launched by the disguised army in and around Galle Face on the night of the 22nd. One of the "Exposure News" journalists was among others who were attacked early that morning.

Runil burnt his house by himself and blames to people..

Ranil set fire to his house, and now trying to put the blame on the people who were protesting in front of his house. It has been announced that the photos of 14 people who were in the video tapes are wanted to be arrested. Ranil's house caught fire before the protestors broke through the last barrier and went forward. There are countless videos of the arsonists climbing down the wall after setting the fire and leaving under police protection.

Runil Wickramasingha became the president as a result of the struggle. The above details are some of the incidents of the repression launched over the past few days. The Galle Face protesters were brutally attacked in less than 24 hours after he became president.

- By a staff reporter