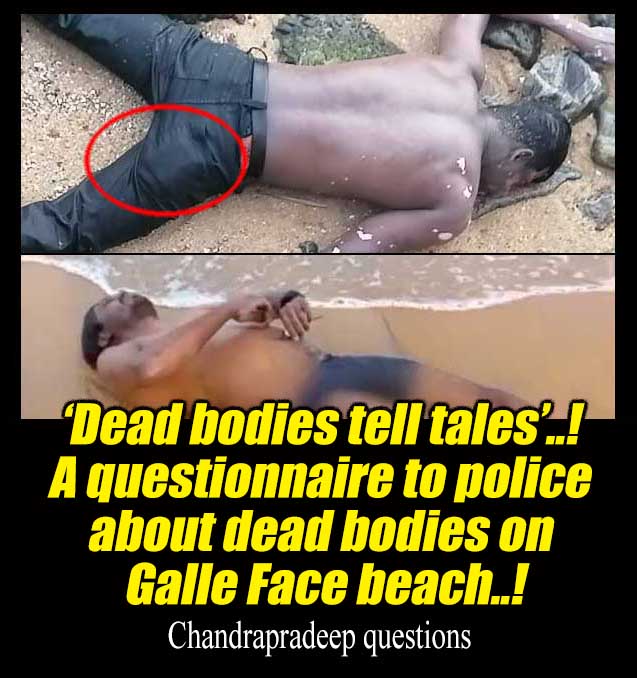 (Lanka-e-News - 31.July.2022, 11.45 pm) It has been a few days since two young dead bodies were dumped on the beach of Galle Face on the evening of the 29th and the morning of the 30th. But the police have not identified these people or given the reasons for the deaths or the details of the autopsy or anything. The media also does not question it. But Lanka E News investigative journalists have many questions about this. Those questions are presented here and the police or other responsible person should give the acceptable answers to the people.

Even before the independence of Sri Lanka, such corpses had been washed ashore and the Sri Lankan police were able to identify them even under the weak technical capabilities at that time.  But today even in this smart era, even after two days have passed, the police have not been able to identify the bodies or find the cause of death. It is extremely difficult to accept.

Experienced investigators who are well-versed about the waters of the western sea area of Sri Lanka say that, if these dead bodies floated to Galle Face, these people must have fallen into the deep sea in Kollupitiya or Bambalapitiya area.

According to the photographs of the dead bodies, these bodies must have been floating in the sea for a period from 72 to 144 hours. The sea area where these people fell can also be told by the way fishes have eaten these bodies. If large fishes are involved, the individuals must be fallen into the deep sea, and if they are small fishes, it is shallow sea.

Why haven't the bodies been identified yet?

The first body found has no shirt and only pants. There is something like a wallet in the back pocket of the pant. Surely there must be enough evidence in that wallet to identify him. The police are still silent about it. The second dead body found has no pant or shirt and only underwear. It appears that the hands of the body had been tied with something. Accordingly, there are strong reasons to suspect that he was killed and thrown into the sea.

Reports can also be obtained about the teeth of the corpses and compared them with the database of the police. If the police did not do so, what are the reasons?

Sri Lankan society is a social one. If someone is missing from the place of residence, the neighbors inform about it. All the people of Sri Lanka are registered with the Gram Seva Niladhari, and the people over 18 years with Election Commission. Accordingly, was there an attempt to find the identity of these people? If not, why?

Over the past few days, about 6 shootings have been reported from the underworld. Did the police investigate whether there was a connection between those activities and these dead bodies? If not, why?

About 17 murders were committed by motorbike riders in the last months of June and July. The police have not found the perpetrators of any of them. According to the CCTV footage, all those shootings were done with T-56 and 9 mm fire arms. By the way the killers handle those firearms, you can tell that they are very experienced shooters. Most likely they are members of security forces or army defectors. But the police are silent about all of these.

As said earlier, if the dead bodies were washed ashore on the Gulf Face on the 29th and 30th, they must have fallen into the sea from the Kollupitiya and Bambalapitiya sea areas of Colombo. If so, a major doubt is as follows.

With the commencement of the Port City, the Navy has implemented a 24-hour Navy Vigil every day of the week to search the sea around. Those naval vessels have new sophisticated radars. Accordingly, if any vessel is acting in a suspicious manner in that area, it should be recorded in the radar reports. To know how these bodies came to the sea, Navy records must be checked. Did the police check those reports? If not, why?

Three police marine boats are also operating in the above said region. Have their records been checked? If not, why?

When Lanka e News reported of these dead bodies, doubts were raised whether this was done to create fear in the people of the Gall Face struggle area. So, where the number of people is living that are sufficient to be killed and corpses displayed at any time?  Whose people are they?

The government can deploy a large armed force and brutally attack the peaceful unarmed people in the Gulf Face struggle at night; government can also justify it in the end. But is it possible to justify this type of murders? No. So what they do is to quietly cover up the incident after creating the necessary fear.

Finally, we remind the culprits one important thing..! There is a famous saying that "Dead Bodies Tell Tales." Therefore, if the police try to cover up these dead bodies as unrecognizable, it proves that none other than the government is responsible for these deaths.

A few hours after the publication of the original article in the Sinhala edition, a third unidentified young body was found on the same Galle Face beach on 01 August 2022 at around 2.00 am. A picture of it is also shown below.