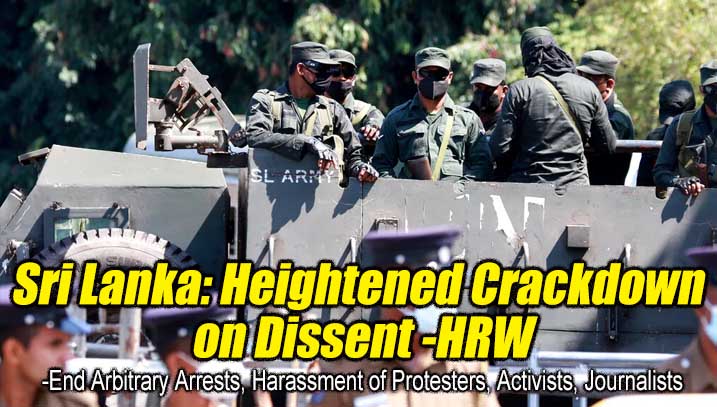 (Lanka-e-News -05.Aug.2022, 8.30PM) Sri Lankan government is using emergency regulations to harass and arbitrarily detain activists seeking political reform and accountability for the country’s economic crisis, Human Rights Watch said today. Since Ranil Wickremesinghe was sworn in as president on July 21, 2022, the police and military have sought to curtail protests through the intimidation, surveillance, and arbitrary arrests of demonstrators, civil society activists, lawyers, and journalists.

Anti-government protests in Colombo and elsewhere in the country led then-President Gotabaya Rajapaksa to flee the country before resigning on July 15. On July 22, President Wickremesinghe ordered security forces to disperse protesters and break up their main site in central Colombo. The police have subsequently targeted perceived protest leaders for arrest and detention.

“The Sri Lankan government’s crackdown on peaceful dissent appears to be a misguided and unlawful attempt to divert attention from the need to address the country’s urgent economic crisis,” said Meenakshi Ganguly, South Asia director at Human Rights Watch. “Sri Lanka’s international partners should be clear that they need to be working with a rights-respecting administration to address Sri Lanka’s deeply rooted economic problems.”

Security forces injured more than 50 people in the July 22 early morning raid on the main janatha aragalaya (people’s struggle) site in Colombo. Security forces assaulted and beat three journalists from Xposure News – Chaturanga Pradeep Kumara, Rasika Gunawardana, and Shabeer Mohammed – and at least one other journalist, Jareen Samuel of the BBC, during the raid. Wickremesinghe berated foreign diplomats for criticizing the security forces’ use of excessive force and took no action to hold those responsible to account.

A number of Buddhist monks and Christian clergy had joined the protests. The media reported that the Colombo Magistrates’ Court on July 25 had issued a travel ban on Father Jeewantha Peiris, a Catholic priest who had been prominent in the protests, and several others. Two days later police visited Father Peiris’s church and said that they had orders to arrest him. In a July 31 statement, 1,640 members of the Catholic clergy condemned targeting the priest, saying that they had all backed the protests.

On July 26, the authorities arrested another prominent protester, Dhaniz Ali, from an international flight about to depart from Colombo. On July 27, unidentified men in civilian clothes abducted Veranga Pushpika, a former student activist and journalist who had also been active in the protests, from a bus in Colombo. Police did not disclose his whereabouts to lawyers or the Human Rights Commission for several hours before acknowledging his arrest.

Human rights defenders said that the police sought to obstruct defense lawyers from meeting with four protesters who had been arrested after they handed over to the police a large sum of money taken from the president’s official residence after protesters had occupied it.

Lawyers and media organizations told Human Rights Watch that they have experienced increased intimidation, including threats of violence and surveillance. In one episode, a group of men claiming to be police officers, but not wearing uniform, visited the office of an online publication, Xposure News, on July 27 and demanded that a security guard identify people shown in photographs and show them CCTV footage.

On July 31, a student protester said in a statement on Facebook that he had been detained and interrogated for three hours by security force personnel who warned him that they could plant drugs on him and arrest him. Police summoned the social media activist Rathidu Senarathna, known as “Ratta,” on August 1 and arrested him after questioning. A Colombo magistrate also issued a foreign travel ban on Senarathna and 11 others suspected of illegal assembly and causing damage to property. On August 2, the authorities seized the passport of a British national, Kayleigh Fraser, who had posted about the protests on social media.

The authorities arrested at least seven people for the July 9 arson attack on Wickremesinghe’s private residence. Activists said that at least some of those detained were known to have been bystanders. Police are investigating a hotel that allegedly provided food to protesters and have raided, sometimes without warrants, the homes or workplaces of several protesters who are in hiding.

In a statement, 175 Sri Lankan human rights defenders and civil society organizations expressed concern about “disturbing developments of abduction, arrest, intimidation, and reprisals against protesters.” Members of the Catholic clergy said the government should “stop the repression of those involved and supporting the Aragalaya and focus on listening to grievances and aspirations of people and take actions to address both immediate and long-term problems.”

Under the state of emergency that President Wickremesinghe declared on July 18, the period that a person may be detained before being brought before a magistrate has been increased from 24 to 72 hours. The authorities have been granted sweeping additional powers of search and arrest, and the military has been empowered to detain people for up to a day without disclosing their detention. These provisions increase the risk of torture and enforced disappearance.

The emergency regulations also introduce extreme new sentencing rules for several offenses, including damage to property and trespassing, which can now result in a life sentence and carry a minimum term of 20 years in prison. Among the offenses subject to harsher sentencing is a provision of the penal code that has previously been used to prosecute same-sex conduct. The decree provides that bail will not be available for those accused of offenses under the emergency regulations.

The state of emergency also gives the president and the police broad powers to ban public gatherings, allows the police or military to order anyone to leave any public place or face arrest, and makes it an offense to cause “disaffection” or to spread “rumors.” These provisions are vague, overly broad, and disproportionate in violation of the rights to freedom of expression, peaceful assembly, association, and movement.

In a statement following the assault on protesters on July 22, the European Union noted that it “expects the new Government to work in full compliance” with its human rights commitments, made in exchange for tariff free access to the EU market under the bloc’s GSP+ program. The World Bank said in a statement that the government should address “the root structural causes that created this crisis to ensure that Sri Lanka’s future recovery and development is resilient and inclusive.” Earlier, the United States Senate Foreign Relations Committee stated that any agreement with the International Monetary Fund “must be contingent on … strong anti-corruption measures and promotion of the rule of law.”

“The people of Sri Lanka are reeling under an economic crisis that has plunged millions into food insecurity, the closure of schools, and shortages of medicine, fuel, and other necessities,” Ganguly said. “The government needs to end its repressive policies and practices and act urgently to address people’s basic needs, win public trust, and uphold the rule of law by holding those responsible to account.”