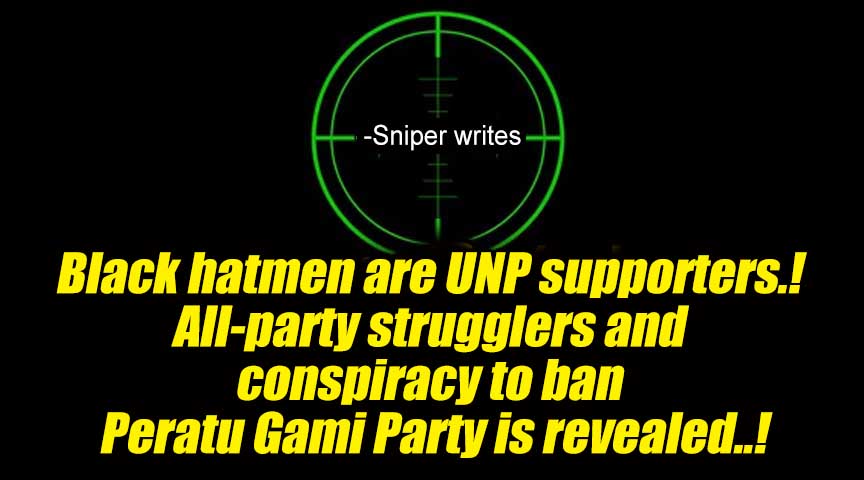 (Lanka-e-News -07.Aug.2022, 9.05 pm) 'Lanka e News' responsibly declares that the so-called black hat group, who made a public statement that they would leave the struggle ground, was never in the GotaGoGama (struggle ground). By not standing on the ground of struggle, but by making a statement that they withdraw from that ground, these hatmen’s true faces have been revealed. Apparently, these scapegoats of Ranil have supported the struggle with the aim of achieving his ulterior motive.

Months before the struggle began, a civilian leader, now made a general by Ranil ‘Rajapaksa’, had said with another political party leader that Ranil ‘Rajapaksa’ would soon become Prime Minister, and that a number of UNP stalwarts would be promoted to higher positions. We have all those names.

The promise Gota got from Ranil..

In the early stages of the struggle, another henchman of Ranil ‘Rajapaksa’ called Ashu Marasingha, also roamed the struggle ground. He had even received tents from Ranil Rajapaksa's fund.

As stated by Ravi Kumudesh, President of the Health Professionals Association, in a video discussion that Ranil ‘Rajapaksa’ has also supported the protest march held on 28 May.

We also have notes in which Harin Fernando nicknamed ‘Waren’ Fernando stated that he joined Ranil ‘Rajapaksa’ as part of a plan to chase Gota away.

The scapegoats sent by Ranil ‘Rajapaksa’ appeared in the name of colored hats as well as “all-party strugglers”. These people, who did not engage in any positive activity on the ground of struggle, were only issuing press statements and participating in chat meetings with Ranil 'Rajapaksa'.

How the "common amnesty" scam story came to light..

For the sake of the unity of the struggle, we did not reveal this information so far, but now we have to reveal these ‘hatmen’ and the so-called "all Ranil-party" personnel who betrayed the struggle and made the strugglers guilty without trial.

The common amnesty hoax is an insidious scheme to convict activists without trial, and It was also brought forward by these groups. Meanwhile, two other small neoliberal groups of Ranil ‘Rajapaksa’, operating under several different names, are also trying to popularize this amnesty scam.

Who are the Black Hatmen's and 'All-Party' strugglers?

Lanka E News has photographic evidence (given below) that Vimukthi Dushyant, who is the head of this hatmen group, was a leader of Ranil ‘Rajapaksa's "Green Blood" group. The former had been a close friend of the latter.

This small group of so-called black bat-men is actually a group of “green hat-men”. It has also been known about an attempt by the head of this group to seek political asylum by claiming that he is involved in this people's struggle.

After the shooting incident in Rathupaswala, a Rivira journalist, and an island journalist who always writes reports in favor of the police wrote and published that the protestors themselves shot each other. Those two subhuman beings are also the heads of this so-called all-party group.

The so-called leaders of the struggle have become the myrmidons of Ranil Rajapaksa, who is the toilet and backside cleaner of the Rajapakshas. Meanwhile, the true leaders of the struggle are currently in hideouts seeking protection. Among the young people who are in hideouts and struggling to get rid of the heavy oppression that has been inflicted on them, there are many professionals such as educated intelligent engineers, IT professionals, artists, etc., who have come forward for a real system change in this country. Although some can easily find a job abroad, they still haven't given up their hopes and contribution for a real "system change" in this country. They are the real heroes. (They are in constant contact with Lanka E News; we never abandon them.) So Ranil ‘Rajapaksa’ should immediately stop this repression. We also note here that, if not, the 'compensation' to be paid by Ranil ‘Rajapaksa’ is huge.

The plan drawn by Ranil to chase Gota and win the presidency..

It appears that Ranil Rajapaksa, who is probably the most talented tricky and deceitful politician born in this country, planned to get the prime minister-ship by ousting Mahinda and thereafter to be the president by ousting Gota using the youths in the real struggle as stalking horse. It is now confirmed that he scared the general public by saying, “the next two weeks are difficult time” and “the next two weeks are the most difficult time” after getting the prime minister-ship. Because those two weeks are now over and they weren't that much hard. It has become even more difficult after this Ranil has become the president, but Ranil ‘Rajapaksa’ and his gang of bards says “Now is great, now is fine”.

Meanwhile, a former member of the provincial council who was kicked out due to a vehicle fraud of 60 lakh rupees while he was with the said party, is also a spy of the repressive junta of Ranil 'Rajapaksa'. He has given a list of names of 14 Frontline Party activists to Kamal Gunarathna and Suresh Saleh's suppression unit. Ranil 'Rajapaksa' is trying to popularize any 'terrorist' story and ban the Frontline Party. According to the internal reports received by Ranil Rajapaksa, the Frontline Party has less than thirty thousand members in the whole country. Their conclusion is that this number can be easily suppressed by labelling them as 'terrorists' and as a result the entire anti-government people's movement will also be demolished.

The suppressors like Ranil, Kamal Gunarathna and Suresh Sale are of the opinion that sometimes the JVP will secretly wish that Frontline Party be banned, and it will be an unofficial support to the government. They have come to that conclusion because of the way the left parties supported the banning of JVP during the suppression of JVP in 1988-89. At that time, Ranil's UNP gave weapons to the left parties to hunt the JVP members. This time, JVP members may be targeted and attacked in order to get JVP support in suppressing the Frontline Party. Those attacks may appear as Frontliners' activities, because those who separated from the Frontline Party are also spies and have now been joined with the oppressors. These are very easy tasks for those who exploded the Easter bombs to give the crown to Gota.

The clown "Ivan the Terrible" and stupid advisors..

One of Ranil Rajapaksa's idiots is now running ITN TV and several such others who were Ranil's stupid advisors during the good governance period are also trying to stand up after shaking off their dirt.

Apparently, the latest villain is Ivan the Terrible, a comical soothsayer. The clown Ivan the Terrible is a heathen who has made a living by singing hymns to all elected presidents of this country. If you need proof of that, you can hear it from the two later appointed editors of his own Ravaya newspaper.

Ranil Rajapaksa was the founding executive director of the Batalanda torture center during the terrible fighting between the JVP and the state. At that time, Dharmasiri and other members of the Pra organization scared Ranil and obtain all the things and favors they wanted. In the same way, there is no doubt that today's comedian Ivan the Terrible is now enjoying choon from Ranil Rajapaksa.
Let it be written for now that the hat-men and the so-called all-party strugglers have now been qualified to be minions of the clown Ivan the Terrible.

Latest information about the NGO double-dealers in the next article. 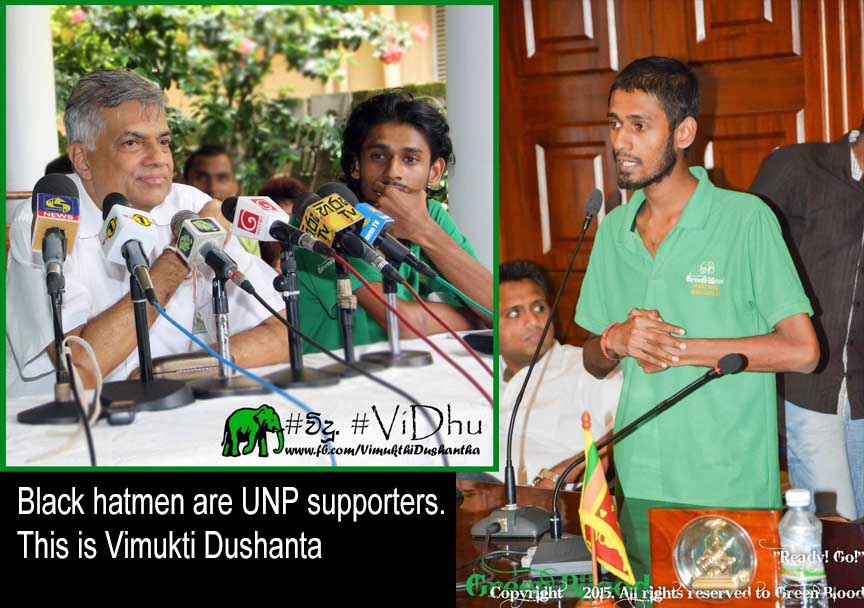