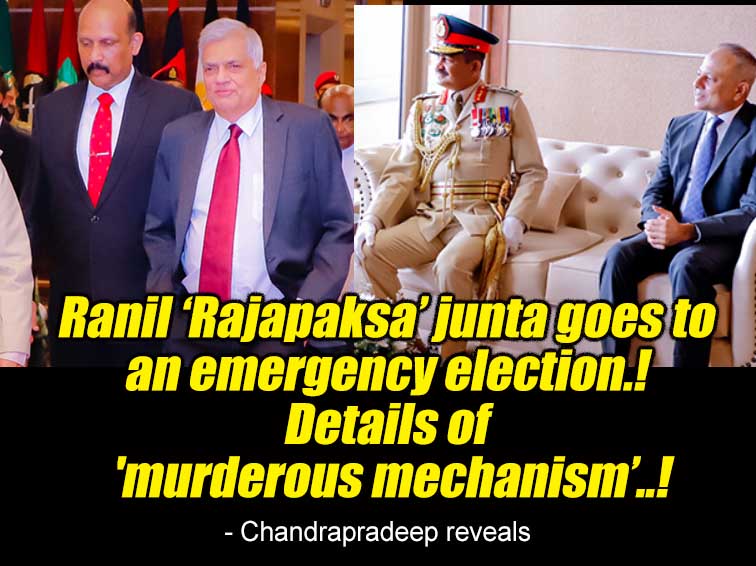 (Lanka E News -12 Aug 2022, 11.35 pm) Despite the national crisis the country is facing, ruling party Pohottu members and Ranil ‘Rajapaksa’ have been failed in building an all-party consensus in parliament, due to the ruthless authoritarian behavior of the President Ranil ‘Rajapaksa’ and the Pohottu government. It is reported to Lanka E News that they are now planning to take advantage of a parliamentary election.

Ranil is going to publish to the people and the world that "I took the burden of the crisis disregarding my life. I reduced the queues, abolished the struggle, only I can recover this economy, but the parties in the parliament did not support me, so I dissolve the parliament, so, there will be an election for a new parliament."

Although the president cannot dissolve the parliament until another two and a half years, he can do so by a simple majority resolution of the parliament. Ranil and Pohottu members have that simple majority. Ranil ‘Rajapaksa’ has taken advantage of the fact that, even if the Pohottu-party members who have not completed 5 years do not like such a proposal, the opposition can do nothing but support it.

Ranil and Pohottu-members know very well that the crisis will further escalate in a very short time. The UNP and Pohottu leaders are of the opinion that rather than wasting more time, it is better to go to a poll after spreading a concept that the situation is now better than when Gota was in power.

Even now, there is no unity between the opposition parties. The 20th amendment brought by Gota is still in force. Commissions are entirely at the discretion of the president.

The ‘21’ of Ranil Rajapaksa, which is said to be brought, will be evaporated as a next election promise, without being fulfilled recently.

In such a situation, Ranil ‘Rajapaksa’ and Pohottu-Basil's assessment is that it is possible to win through a simple tricky election, using the power of the president and the government. Namal Rajapaksa is now preparing for the election by inviting applications from young people.

Wonderful moment and struggle in history...

On the one hand, this is a wonderful moment in history. That is, since S. W. R. D. Bandaranaike and D. A. Rajapaksa broke away from the United National Party and founded the Sri Lanka Freedom Party, the two parties have come together for the first time in history after decades of exchanging power from time to time. It has been estimated by both parties that it can be used as a big campaign advantage.

But one thing they have not considered is that not a single grassroots organization of Sajaba, along with Sajith, who broke away from the UNP will not join Ranil's UNP again, considering the fact that because Ranil became the president. No matter how much Ranil tried and tried, none of the Sajaba MPs is going to strengthen Ranil's hands except the couple of monkeys called ‘Waren’ Fernando and ‘A’manusha.

The main issue for them is the 'struggle' that has been planted in the hearts of the people. But it too has not yet had a chance to organize itself properly. By now, the real leaders of the struggle had gone into hiding due to Ranil's launch of kidnapping to crackdown the struggle. Ranil’s UNP leaders are now using their henchmen to clean up the Gall Face and propagate a distorted ideology.

It will take some time for the real leaders of the struggle to reorganize. They don't have as much experience as these corrupt politicians. Therefore, in the meantime, the Ranil ‘Rajapaksa’ government has planned to intensify the repression and not allow re-organization.

Here is the 'killer mechanism' of Ranil's suppression…

Presently, Kamal Gunaratna and Suresh Sale are building a murderous mechanism in the structure of the security forces including the army. Ranil ‘Rajapaksa’ recently went to the army headquarters and expressed his gratitude for protecting the parliament and gave the necessary morale to the murderous mechanism being built newly. There, Ranil asked when the “Air Combat Force”, one of the forces called for the recent suppression, was established. Army Commander Vikum Liyanage said in 1991. “Ah then in our time,” Ranil happily said, but that force was established in 1994 when Anuruddha Ratwatte was the Defense Minister. It was established as a secret force under the 53rd Division and had no known location. The above is an example of a free of charge 'choon' that Ranil enjoys after becoming the Auto-President of the country.

However, the latest addition to the above said murderous machinery is the appointment of Suresh Saleh's right-hand man, Brigadier T. M. Majeed as the Director of Psychological Operations of the Army. Majeed was a close friend of Suresh Saleh who worked in Army Intelligence.

On the morning of the 22nd of July, the army was sent to the Galle Face following the orders given by Kamal Gunaratna to Nishantha Mannage, bypassing the army commander.

Nishantha Mannage is Kamal Gunaratna's closest officer who was attached to the Air Mobile Brigade when the latter was the commander of the 53rd Division during the war.

The above said Major General Nishantha Mannage is one of the leaders who are forming a separate unofficial 'murder gang' by gathering the people who are strongly loyal to the Rajapaksas from Special Task Force, Army Commando Force, and Air Force Mobile Unit. He, who is vying for the next army chief post, is following any illegal verbal orders given by Kamal Gunarathna.

Another operator of this murder mechanism is Major General Rowell, who retired from the Army Signal Corps and currently serves as the Director of Research and Development of the Army. Gathering the IT experts in the Signal Corps and giving the instructions, Rowell operates several social networks against the struggle.

Other operatives of the murder mechanism are Major General Sujeeva Senarath Yapa, the current Commander of the Volunteer Force who served as Colonel Commandant of the Special Forces, and Director of Military Intelligence (DMI) Major General Robin Peiris, and Chief of National Intelligence (CNI) Brigadier Ruwan Kulatunga.

Two masterminds unknown to everybody...

Unknown to all, there are also two masterminds who advise only Kamal Gunaratna. One of them is the retired Major General, as well as a former military intelligence chief Hendawitharana, who has extensive experience in suppressing all youth struggles in the country since the 1971 youth struggle, and Chandra Vakishta, who has retired after serving as the head of SIS and TID of the police.

There is a practice of secretly giving special privileges that others do not get to these soldiers and officers who are selected from various sectors and act as 'hit men' of the murder mechanism. Even when other ordinary soldiers do not have gas or fuel, these special hit men get gas, fuel, and everything including enough money at their doorsteps. Accordingly, these hit men act as dutiful and obedient puppies.

We will reveal more details about the activities of this killer mechanism to the people in the future.

Another loss from the historic loser...

While he was the Secretary of Defense, 72 members of parliament were not able to protect their properties; the former Prime Minister fled without being able to get security; the Commander-in-Chief, the former President, also had to flee the country.

Those who have the knowledge and understanding of the security forces see this man as a loser, but he tried to become a ‘hero’ by writing a book under his name on a war fought by others. Actually, this shameless man should take responsibility for the loses occurred during his tenure, and resign, and go to a forest and meditate, trying to wiping out the sins he committed during this life.

The above said 'Murderous Mechanism' which is planned to be led by a loser like Kamal Gune will finally be defeated in front of the people. The herd including Henda, Wakiya, and Kamal Gune must understand where they stand as we have already been able to disclose their murderous dirty plans against the people.