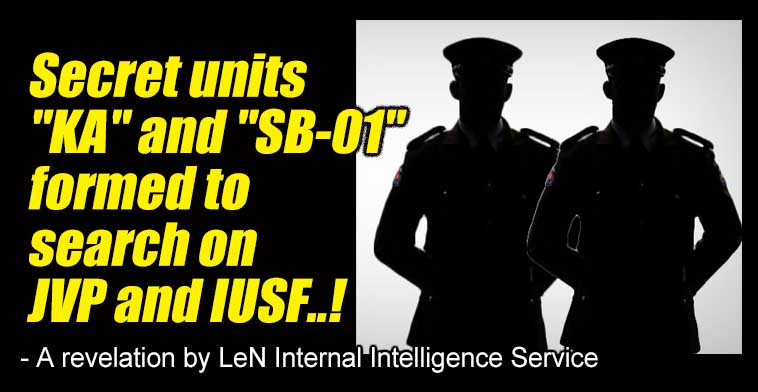 (Lanka-e-News -22.Aug.2022, 5.20 pm) The police secret unit called "Special Bureau" has issued an order to search for the information of those who participated, the organizers of the respective areas, and the vehicles that came in to the Jathika Jana Balawegaya (JVP) rally and demonstration held in Nugegoda yesterday (20). Lanka E News Internal Information Service has received a copy of it, and its image is shown below.

The order was issued by the Senior Assistant Director of the secret unit "KA" of the secret division called Police Special Bureau. He is known by the code name 'ADKA', and this "KA" section is used to find information about JVP, and Inter University Students' Federation (IUSF).

Ordinary lower police officers do not know his name other than his code name. It is the Deputy Inspector General (DIG) of the Special Bureau of Police who transfers the officers for "code names" from time to time in this way. He also has a code name called 'SB-01'. At present, the person called Deputy Inspector General of Police T. C. A. Dhanapala is working as 'SB-01'.

In our earlier disclosure, we have mentioned that this Secret Police Special Bureau is the SIU under the Inspector General of Police, but it is not correct. This secret police special bureau is called Special Branch or 'SB'. In the future, we will bring more revelations about this 'SB', even unknown to most of the police officers.

How the 'KA' section of the SB is hostile to the public..

Secret units of such security forces exist in every state. They are also maintained from public money. They search for crimes and criminals in the relevant country, but the above-mentioned SB in Sri Lanka is different from all other countries. This secret SB in our country is being maintained from public money but doing what is against the public.

For example, the 'KA' section of the above-mentioned SB searches for JVP and IUSF.

JVP is a recognized political party today. Its members are voters who vote for that party. Those voters are also a part of the public of this country. The police units are getting paid from the people's tax money to search for the right to do politics of their choice which is a basic right of the people; a conspiracy to keep the people out of the politics.

The same should be said about searching for the IUSF or 'Anthare'. The IUSF is none other than the intelligent children of the people of this country. They are university students. Universities have a system of rules and regulations to control them. They also have the right to do their own politics. The IUSF is a student body legally recognized by the university administration. Searching for them by getting salaries from the public's tax money is also a conspiracy to prevent the fundamental rights of those students.

Buy 50 kg of drugs, get a pistol and ammunition free.!

Instead of searching the people in this way, these secret units should search for crimes in the country. The state media itself had reported that the amount of heroin seized from Sri Lanka in these few months alone was "more than one ton". It is no secret that a smidgen of drugs has been seized.

According to the internal information service of Lanka E News, today Sri Lanka is a ‘Kethumathi’ for drugs. Tons of drug powder is coming into Sri Lanka as a result of the reduced patrols of the navy due to shortage of fuel. Today, while the price of every product in Sri Lanka is rising, only the price of heroin has gone down instead of rising, because there are more drugs in the country than the demand.

Drug traffickers give a pistol and two magazines of ammunition free of charge to their wholesale buyers of 50 kilos of heroin. There is a very competitive drug wholesale trade in Sri Lanka these days.

More than 20 murders were committed by underground shootings in June, July and August alone. Today's murder count is 2. All of them are believed to have been carried out by drug traffickers with the above said free pistol plus ammunition.

None of these murders have been found by the above-mentioned Secret Police Special Bureau, 'SB'. Instead, what the 'SB' is doing is conspiring to break the back of the people while maintaining themselves with public money.

Not only drug-related crimes, but they do not even search on the "while-collar mafia" emerged due to recent fuel shortages.

Due to this white-collar fuel gang, even the businessmen in the export sector, who bring dollars which is the most essential thing in these days to the country, are under great pressure. These businessmen are given a quota of fuel to run their industries, but 1000 liters of fuel must be given back to the white-collar dirty gang of the petroleum corporation, as a bribe not in money, but as fuel.

The Secret Police Special Bureau 'SB' must find the root of these crimes and the criminals. Instead, they conspire to screw up the public..

The fraudulent act of running these secret sectors by maintaining them with public money should be stopped immediately. Until that is done, Lanka e News internal information service will reveal more information about these crooks to the public. If you are hostile to the public, be prepared to pay for it.!