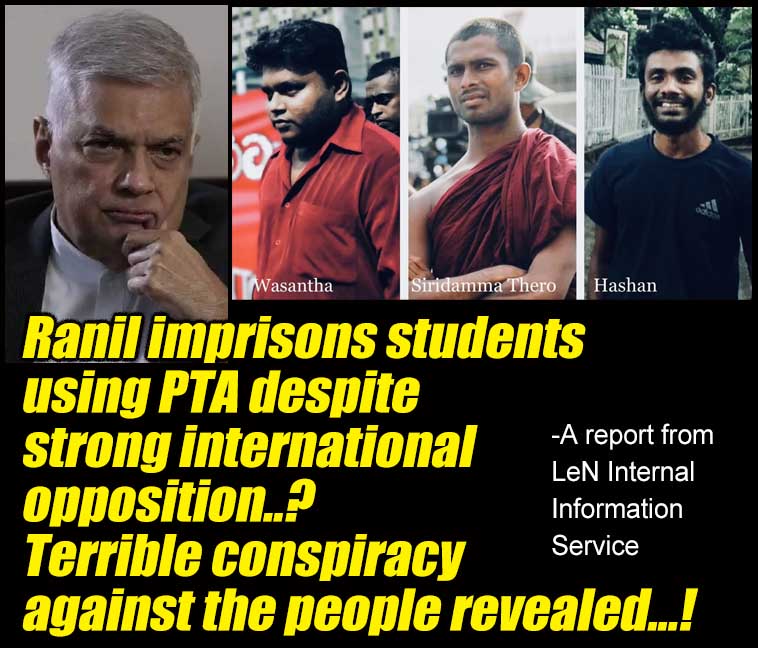 The said Act is a cruel, disgusting law of Sri Lanka which is condemned by the civilized world as against humanity.

Even the United Nations had warned Sri Lanka that the said students should not be detained under that act, and if the detention order was signed, the day of signing would be a dark day for Sri Lanka.

It has been revealed that the president, who has not been approved by the appointing authority of Sri Lanka, is working to please his masters, the Rajapaksas, and with an aim of a cruel future plan, no matter what happens to the country.

A strong warning was given by the United Nations Special Representative for Human Rights Defenders, Mary Lawler, through a tweet published yesterday (21) morning, saying that if it is signed, that day will be a dark day for Sri Lanka.

A similar tweet was also published by the European Union delegation in Sri Lanka yesterday. “I'm deeply concerned that Human Rights Defenders Wasantha Mudalige, Hashantha Jeevantha & Galwewa Siridamma Himi have been arrested under the SriLanka's Prevention of Terrorism Act. I call on President Ranil not to sign their detention order, doing so would be a dark day for Sri Lanka.”

Amnesty International also issued a long announcement under the heading "Protesters should not be detained under the cruel anti-terror law" today (22), against the detention of the above three students. “The PTA allows for detention of suspects for up to a year without charge, which is in violation of international law. The defense minister must not sign an order to detain them further under the PTA,” the statement added. (Read - https://www.amnesty.org/en/latest/news/2022/08/sri-lanka-protesters-must-not-be-detained-under-the-draconian-anti-terror-law/)

Is Ranil a lunatic?

Even when all the powerful international organizations are repeatedly telling Ranil Wickramasingha to not sign the detention of the said students under the PTA Act, why did Ranil sign it..? Is it because he has caught the madness of Sri Lankan presidents who say, "I do what I want regardless of what the international community says?" "We are the only ones who can help us now," he said in Anuradhapura yesterday; did he say that because he was in such a state of mind?

Ranil is not crazy, it is a horrible conspiracy…

Although these issues have arisen among political observers, Lanka E News internal information service has received a different story.

Ranil Wickramasingha signed it despite the powerful international saying that the cruel anti-terrorism laws should not be implemented against the students who were protesting peacefully, and that the day of signing would be a dark day for Sri Lanka, and that signature violates international law. It's not because he's crazy. It is because he, together with 'Pohottu" supporters and a security gang, is involved in a very gruesome and bloody conspiracy. A secret meeting of this gang started last night and was held till late midnight. Ranil today signed the order to detain the students for 90 days under the cruel PTA Act according to the decisions taken there.

The summary of the conspiracy is as follows…

Mudalige and other student activists were accused of engaging in an anti-government conspiracy. The Frontline Party will be banned based on the evidence related to it. Ranil and gang's assessment was that they would then take up arms. Ranil and his gang assume that the Frontline Partiers who broke away from the JVP will also take up arms if they are banned, just as they took up arms when the JVP was banned with no reason in 1983.

They will use the conflict between the Frontliners and the JVP. Their assessment is that the JVP will become happy and support the banning of the vanguards.

It is an advantage for Ranil-Pohottu gang to have an armed struggle in the country. Then it is easy for them to intensify their repression of the people and win the next election with a fraudulent vote-stealing, gaining international approval. This is their conspiracy plan.

They have also estimated what they should do if the Frontliners do not take up arms despite being banned. Then the security conspirators will start armed operations in the country with their own security gangs as they used the Saharans earlier. Criminal blames will be placed on the banned Frontliners. The youth will be placed in a position where they cannot remain unarmed. Often the youths will be given weapons through agents by the above said security conspirators themselves.

Even when the international community repeatedly said 'No', Ranil today signed the PTA Act to detain the youths in order to proceed in line with the above said conspiracy.

Thanks to populist officers…

The people and the opposition political leaders should be aware of this conspiracy and be careful not to fall into the pitfalls and take the next step. Lanka E News Internal Information Service can only expose the conspiracies the rulers are planning against the people. The people of the whole country should be thankful to those populist officers who give correct information to our internal information service despite the threats to their lives.

- A report by the LeN Internal Information Service