Not Repression, only the Democratic Reforms will end the people's struggle in Sri Lanka -AAGGSL 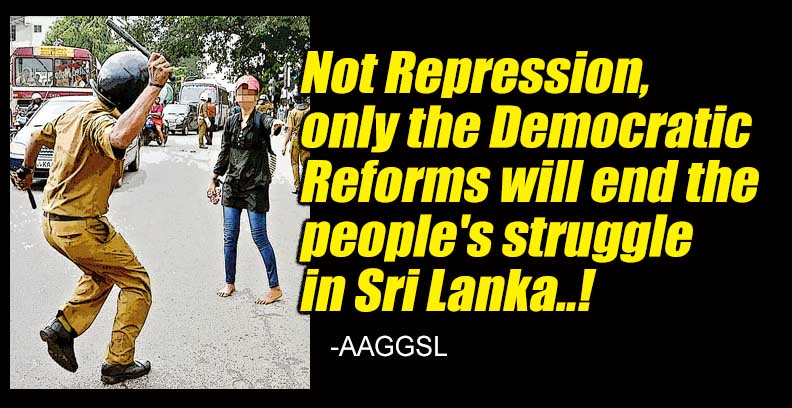 (Lanka-e-News -02.Sep.2022, 6.50AM) A just and spontaneous people’s struggle in Sri Lanka for socio-economic rights, accountability, and democratic and political reforms has met with severe repressive measures under the notorious Prevention of Terrorism Act (PTA).

President Ranil Wickremesinghe, who – when he was Prime Minister – accepted the people’s right to protest peacefully and promised to look into the demands of the protest movement, has now taken a U-turn. His first act since becoming president was to declare a state of emergency, providing the security forces with draconian and unaccountable powers, including the right to detain a person for up to 72 hours without being charged. So far, close to 4,000 activists have been arrested under the flimsiest of charges and more than a thousand are still held in remand custody.

Emergency Regulations are being used to suppress the democratic will of the people and engender an ethos of fear and silence. And authoritarian and unaccountable powers of the presidency are being applied to instil terror in an unwilling populace to secure compliance.

Inter University Students Federation (IUSF) held a peaceful march on August 18, and the security personnel used batons, water cannons and tear gas to disperse them. On the day, 21 student leaders were arrested of whom three, including the IUSF Convenor, were illegally held in detention bypassing the court’s system. President Wickremesinghe signed orders to hold them in long-term detention under the notorious Prevention of Terrorism Act (PTA). And the regime’s arrest spree continues.

The draconian PTA gives wide powers to the Executive and security forces to arrest and detain persons for a lengthy period of time under any false pretext without any convening judicial authority examining the basis of the charges laid. Such detentions have been used countless times in the past decades to subject detainees to torture and inhuman treatments. The Ranil-SLPP regime has formed special units to target all those who are facilitating and attending the protests including members of the expatriate community.

The situation appears to be developing into a nightmarish scenario where thousands could die or be made to disappear, and abductions, torture and degrading punishments could become the norm, as has happened repeatedly in the past. From August 22, in tandem with the deployment of security forces in all 25 districts of Sri Lanka to maintain public order, certain pro-Ranil and pro-Gota military officers have been promoted to the ranks of Major Generals. Any opposition to the government is being maliciously and falsely interpreted as fascist or terrorist activity. Amnesty International, UN Special Rapporteur on Human Rights and other human rights organisations and civil society actors have already expressed their serious concerns about these developments.

Sadly, the history of Sri Lanka is replete with heavy-handed police and security forces’ responses to peaceful dissent against State oppression and tyranny. The PTA was originally enacted in 1979, to crush the Tamil youth of the North and East who took up arms to fulfill the mandate given to the Tamil leaders at the August 1977 General Elections to secure a separate state for the Tamil speaking people of Sri Lanka. Rather than negotiating with the Tamil political leaders to accommodate their clarion call for federalism, which they have been demanding since 1949, the JR Jayawardena government set out to suppress the militants by whatever means, labelling them ‘terrorists’. A 30-year vicious war followed and billions of rupees were spent to find a military solution for a political problem that saw numerous extra-judicial killings and thousands of people disappear with total impunity.

That draconian PTA, which was to have eradicated the so-called terrorism within a year or two, is still being used today against the peaceful activists and youth of the South, who are campaigning for their just demands for economic wellbeing, fundamental rights, political reforms and government accountability. The suffering people of a failed state have no choice but to persist with their protests; oppressing and terrorising them is not an option.

By applying targeted repression against the protestors, the ruling elite is engaged in sophisticated political manoeuvring to blunt the will of the populace for long-lasting political and structural change. The Ranil-SLPP regime by granting political concessions to some social groups while violently suppressing others is trying to sow the seeds of disunity, yet again, thwarting their desire for building a united country through truth-seeking, righting the wrongs of the past, and a fair go for all.

President Nelson Mandela once said: “… it is the oppressor who defines the nature of the struggle, and the oppressed is often left no recourse but to use methods that mirror those of the oppressor. At a point, one can only fight fire with fire.”

Today, the Sri Lankan state cannot feed its people, and the power and wealth of the nation are in the hands of a few. Instead of dealing with the economic crisis, and the institutions and individuals who perpetrated it, they are resorting to their old political playbook of looking for scapegoats to hide their criminal actions. This is done so by escalating violence against those who are seeking peaceful change. These actions clearly breach international human rights and fundamental freedoms of the people.

Under these dire circumstances, we appeal to the international community, the United Nations Human Rights Council, trade unions, progressives and all those who value democracy and human rights to resolutely oppose the escalating human rights violations under the Ranil Wickremesinghe presidency and stand in solidarity with the people of Sri Lanka whose legitimate campaigns have been suppressed by arbitrary arrests and detention. Any international bailout and support from the wealthy diaspora must be contingent upon curtailing corruption, wastage and mismanagement of the economy, freedom of expression, and respect for the rule of law.

AAGGSL calls upon the Ranil-SLPP government to immediately rescind the Detention Orders issued and to take all necessary steps, along with the opposition parties, to abolish the draconian PTA.

We strongly believe that only democratic and constitutional reforms, not repression, will end this spontaneous people’s struggle for a holistic system change that will pave the way for sustainable economic prosperity and peace in Sri Lanka.

Until then, the people’s struggle through peaceful means must go on.