President and Police Minister set up a fund to encourage police criminals..! 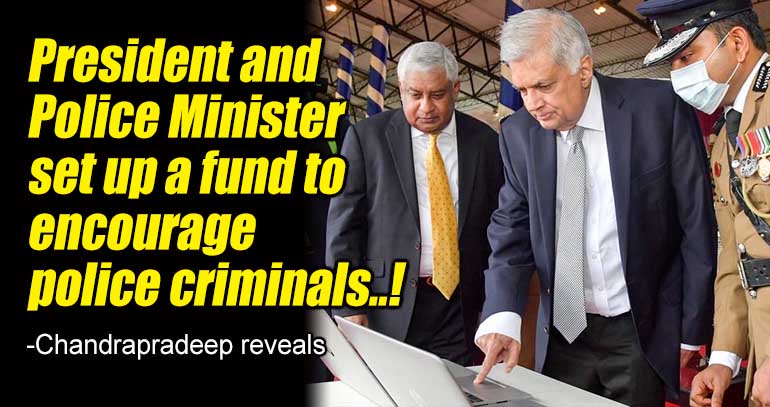 (Lanka-e-News - 08.Sep.2022, 8.10 pm) It is reported to Lanka e News about a plan to turn Sri Lanka's police upside down by both Sri Lanka's president nicknamed "Ranil Rajapakse" and Police Minister Tiran Alles, both are holding the office without the proper will of the people.

The plan is to establish a fund for the police to provide legal support with public money for murderous and corrupt police officers who are not supported by the Attorney General. The name of this fund is "Legal Relief Fund".

When suspects are killed or tortured in police custody as well as when people became victims of police brutality in broad daylight, the Department of Attorney General sometimes does not provide free legal assistance to the police officers charged with criminal or fundamental rights cases before the court, depending on the seriousness of the crime. Such criminal cops should get legal assistance by paying their own money. For example, Senior DIG Deshabandhu Tennakoon had to pay Rs. 10 lakhs from his money to a famous lawyer for such a case recently.

Now Ranil-Allas couple has planned to set up a fund for the police to get private legal aid to criminal cops in such cases. That's what the "Legal Relief Fund" is all about.

The "Legal Relief Fund" is going to be funded not by anyone's private money, but people's money. The said public money has to be obtained from the joint fund of the Parliament. But at present, there is not enough money in the joint fund of the Parliament. Therefore, they are going to get money instead from the existing 'reward fund' of the police. So far, the collection of "Reward Fund" is Rs. 5 billion.

The "Reward Fund" is mainly funded by drug raids carried out by the police. A part of the value of those confiscated drugs, as well as illegal gold, gems, timber, etc., is added to the reward fund. This "Reward Fund" has been set up to encourage and reward the competent, brave, and honest police officers who lead or contribute to the raids.

Transferring money from the Police 'Reward Fund' to the so-called 'Legal Relief Fund' which is going to be established by 'Ranil-Allas' [notorious corrupters] is completely against the pure purpose of the said "Reward Fund". That is to spend money in the "reward fund" for illegal, beastly, corrupted, and cowardly police officers to encourage them. In the end, what happens is that the entire police force, which is already full of beasts, corruptors, and cowards, will become another underworld.

On the other hand, the 'Legal Relief Fund' planned by “Ranil Rajapaksa” and Tiran Alas is a reward for those who violate the basic rights of the public as stated in the third chapter of the Constitution. If a state protects those who violate fundamental rights, that state officially violates the fundamental rights of the people. Such states have no place in the present civilized world.