ICC has surrendered to bettors..? 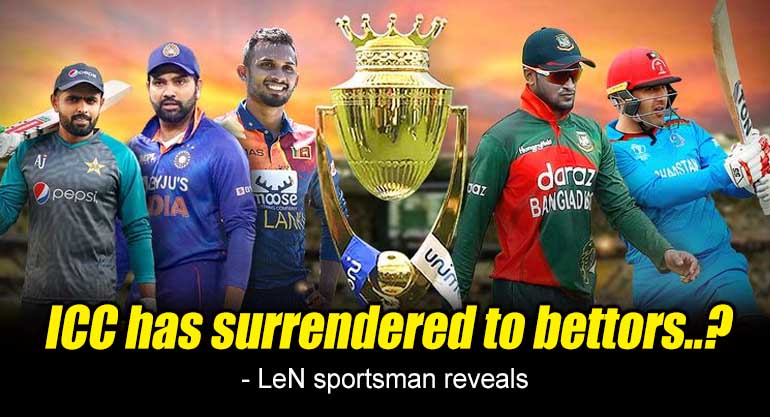 (Lanka-e-News -11.Sep.2022, 5.00 pm) Many hot matches were seen in the Asia Cup cricket tournament being held in Dubai these days. The final match is scheduled to be held today Sunday (11) between Sri Lanka and Pakistan.

In this tournament, the Sri Lankan team lost to Afghanistan in the first match. But in the matches held thereafter, Sri Lankans players again managed to win against Afghanistan as well as Bangladesh, India, and Pakistan.

Dubai, Sharjah is a bettors' paradise. The ICC is also headquartered in Dubai.

In this way, the ICC, which strives to free the players from the bettors, on the other hand, encourages the bettors to sponsor cricket tournaments and teams. It has become a joke.

Now, most of the cricket betting takes place through 'Betting Websites' run by bettors. Most of these betting websites are in India.

These betting websites and apps have become the main sponsors of the IPL tournament. LPL matches in Sri Lanka are also sponsored by these betting sites.

In Australia too, a 'betting site' called '360bet' regularly sponsors tournaments. The website itself takes online betting for the result of the respective match as well as the number of runs scored by each batsman.

There are many bets placed on getting out for zero, no balls, and wide balls.

Nowadays, the players who are caught in the trap for this are not paid immediately in cash. Many ways to get money have been arranged in such a way that they are not caught.

Currently, the sponsor of the players for the Sri Lankan cricket team's trip to Dubai is also a betting website called 'fairplay'.

But to be cunning, they have also maintained a news website with the same name and have officially sponsored the Sri Lankan team as 'fairplay news'. It has news, but the 'fairplay' site, which is run under the same logo, has betting.

Thus, there is scope for those bettors to have direct or indirect relations with the players.

1Xbet is another similar betting website. They have now started sponsoring also some journalists, and are working closely with the Sri Lankan team in the upcoming Roadmasters Veterans Cricket Tournament. It is special that its manager is also a player-manager.

Trickery of tournament owners and managers..

It is these player-managers who infiltrate the players into the premier leagues around the world. By this, they get a 20% commission from the player and build a relationship with the respective team owner.

If you study carefully, you will find that the same people own the tournaments like IPL, BPL, CPL, Dubai T10, etc. The same players are also selected for their teams. The managers of those players are also the same.

When the matches were first held at the Sharjah Stadium under the leadership of Bukatir, Asif Iqbal was the tournament director. He was later found to be in close contact with bettors.

At that time, it was revealed that not only the players but also the referees were given money by the bettors who went directly to their hotel rooms. This is why Bukatir's Sharjah benefit tournament vanished.

Usually, during a tournament, it is suspicious that outsiders hang out with the players too much in and outside the hotel, so the ICC is very concerned about it. Team managers are also assigned special responsibility for this.

Wallet of ICC is getting fatter…

But these days we have come to know about the player-managers who go to Dubai and work closely with the players in and outside the hotel. The team manager who supports them for this is also responsible for this.

A final match for a trophy is decisive. Audience attention and attraction are high. Any player can become a decisive factor in winning or losing a match.

Tournaments and teams are officially sponsored by betting companies these days. They are also silent about it as ICC's pockets are getting fatter. No one has been caught by their notorious anti-corruption unit recently.