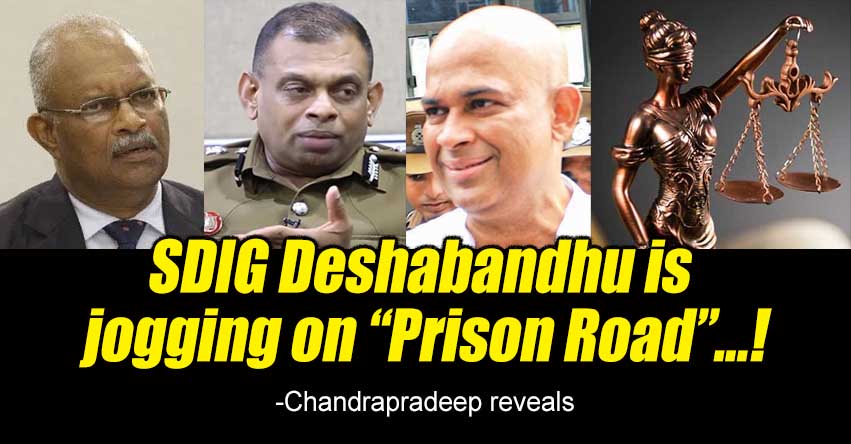 (Lanka-e-News -26.Sep.2022, 7.30 p.m.) One of the notorious senior DIGs in Sri Lanka Police, Deshabandhu Thennakoon, is on his way to serving a 7-year prison term with hard labor. It is because of his conspiracy to undermine Sri Lanka's best detective, Shani Abeysekara, who is nicknamed the "Sherlock Holmes of Sri Lanka". According to the reports currently available, the incident is as follows.

Shani Abeysekera is a world-renowned great detective who has seen not only terrorists, underworld leaders, and evil politicians but also murderous DIGs in jail, including LTTE terrorists involved in the Central Bank attack. Although retired, he is a prosecution witness in many pending criminal cases. Therefore, the threat to the life of such a great man does not end until his death. That is the accepted norm of the world.

After becoming the president, Gotabaya Rajapaksa, one of the Rajapaksa cynics who contributed to making Sri Lanka a bankrupt nation, not only took the vilest revenge on Shani Abeysekara but also tried to kill him by putting him in jail and exposing him to Coronavirus. His security was also removed, making him an easy target for assassins.

This Deshabandhu trashes the orders of the Inspector General of Police. He only follows the orders of Ranil Wickramasingha, Vajira Abeywardana, and Tiran Alas. (Ranil, who was defeated in the elections and unable to go to the parliament, is now the president of the country. His supporter Vajira is a gossip who declared that Ranil is the most powerful head of state in the world. Tiran is the current police minister as well as the former LTTE sympathizer.) Thennakoon has directed the order of the Inspector General of Police to the secretary of the Ministry seeking further advice without providing security to Shani. He cannot do so, and what he did is illegal.

Even the Inspector General of Police should be subject to punishment if the orders given by the said authority constituted under the Protection of Witnesses and Victims Act are not implemented. That is the law.

The law is enforced by the Attorney General through the court against the officers who do not implement those orders. All that is required is a complaint to the Attorney General from the victim or the witness. When the authority has ordered that protection should be given to a witness or a victim, the punishment given by the court to the officer who fails to do so is imprisonment with hard labor subject to a minimum of 2 years or a maximum of 7 years.

Thennakoon, who is living a dream of being an Inspector General of Police, is now walking on the same road where he was caught and kicked by the people when running away from the public.

Ranjan Ramanayaka has now been pardoned by the President, but Shani Abeysekera and a group of other judges, who were subjected to vile injustice because of Ranjan Ramanayaka's lunacy, have not yet received justice.

It was affected by an illegal act done by Ranjan Ramanayaka. It is illegal to record phone calls without telling the recipient. It is also unethical. Many decent organizations inform the recipient of the call through a pre-recorded message that "we are recording your call."

Ranjan Ramanayaka, who has been disoriented between his celluloid life, real life, and politics, had secretly recorded not only his incoming phone calls but also his outgoing calls. When he was accused of contempt of court, he leaked the phone calls he made to the judges and Shani Abeysekera, following a piece of stupid advice from someone that would benefit his case. They were not leaked, they were deliberately leaked by him. If not, he must have complained to the police that someone has stolen his hard disk. That did not happen. Moreover, after the 'voice tape leak' incident, he said in Parliament, "I have more. I will also release them." Accordingly, Ranjan used his illegal act to his advantage.

Shani Abeysekera was interdicted from work before retirement according to that audio tape. Not only him but another judge is suspended from work even after the said judge has made a written complaint to the Judicial Service Commission that Minister Ranjan has been calling him and influencing the court cases. The said judge's father dies prematurely due to a sudden heart attack, unable to endure the injustice done to his child. Another judge and a female judge have retired but they have lost their pension. The judge who had complained to the commission was acquitted and reinstated, but his salary has not yet been paid during his suspension.

An investigation was conducted under an SSP of Sri Lanka Police regarding the audio tape of Shani Abeysekera. According to the reports the former got from the government analyst, Shani's audio has been edited 17 times. That is, what Shani said has been distorted. Investigations have not been conducted as to whether it was done by Ranjan Ramanayaka or the media outlets that disseminated the audio tapes. However, Shani Abeysekera's pension has been denied to him to date. That's because answering a phone call from a mentally retarded goofy actor. Shani has not done anything wrong. He tells Ranjan that "I will worship you or I will be your hireling. Please don't go to talk to the judges".

Ranil Rajapaksa, who forgave Ranjan, should immediately do justice to Shani Abeysekera, who conducted criminal investigations according to the aspirations of the good governance government during which Ranil Rajapaksa was the  Prime Minister as Ranil Wickramasingha. Justice should also be served immediately to the above-mentioned judges.

Finally, it should be written as follows: Ranjan, who went to jail like a feral, begged everyone, everywhere to get a presidential pardon. Finally, submitting a letter to the court, he swore that "I would never say anything about the court again." That's not really what he should have sworn in.

He must swear: "I will never secretly record and leak other people's phone calls again."