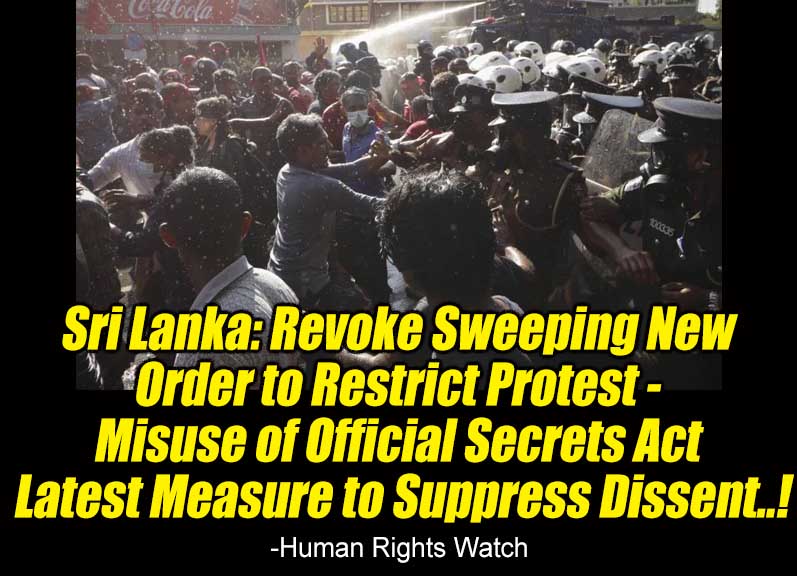 (Lanka-e-News -28.Sep.2022, 11.00 PM) The Sri Lankan government should reverse a new regulation that unlawfully restricts protests in large areas of the capital, Colombo, Human Rights Watch said today. On September 24, 2022, a day after the measure was issued, police arrested 84 people and used tear gas and water cannon to disperse protesters calling for the release of student activists being held under the notorious Prevention of Terrorism Act.

On September 23, the Sri Lankan government invoked the Official Secrets Act to designate public streets and government buildings in central Colombo “high security zones,” where written permission from the police is required to hold any public gathering. Under the regulation, police have wide-ranging authority to arrest anyone inside these zones and only the High Court can grant bail to those detained. These broad, severe restrictions threaten the excessive use of force and prolonged detention for people exercising their rights to peaceful assembly and expression, Human Rights Watch said.

“The sweeping new regulation severely restricting public protest in Colombo is President Ranil Wickremesinghe’s latest desperate attempt to stop people from protesting,” said Meenakshi Ganguly, South Asia director at Human Rights Watch. “While the country is struggling to deal with a deep economic crisis, the government should be making it easier for people’s voices to be heard, not throwing them in jail when they speak out.”

Although the September 24 protest was not within one of the new “high security zones,” police said they used tear gas and water cannon because the demonstration was “organized illegally without any permission.”

Sri Lankans have protested frequently during 2022 amid an economic crisis and collapsing living standards, which led to the resignation of President Gotabaya Rajapaksa in July. The authorities have frequently responded to protests with excessive or unnecessary use of force, including “less-lethal” weapons such as water cannons.

The Human Rights Commission of Sri Lanka, an independent government body, said that the regulation “grossly violates the fundamental rights of the people of this country.” The Bar Association of Sri Lanka said the order “seeks to significantly curtail the liberty of the citizen, without any reasonable or legal basis.”

As a party to the International Covenant on Civil and Political Rights (ICCPR), Sri Lanka has obligations to respect and protect the rights to freedom of peaceful assembly and expression, and to actively facilitate and promote their exercise. Under the ICCPR, any restrictions on these rights must be set out in law and be necessary and proportionate to achieve a legitimate government aim. The new regulation does not meet human rights law standards, Human Rights Watch said.

The Sri Lankan government has as recently as June told diplomats at the United Nations Human Rights Council in Geneva that it was imposing a moratorium on the use of the Prevention of Terrorism Act, which has long been used to facilitate torture and arbitrary detention. The Human Rights Council is currently considering adopting a resolution on Sri Lanka to advance accountability for past violations of human rights and to provide monitoring of the human rights situation.

“Sri Lankans peacefully calling for reforms and government accountability for the economic crisis now face even greater risks of violence, arrest and prolonged detention,” Ganguly said. “Countries at the UN Human Rights Council should do all they can to help people carry out their basic rights and liberties.”