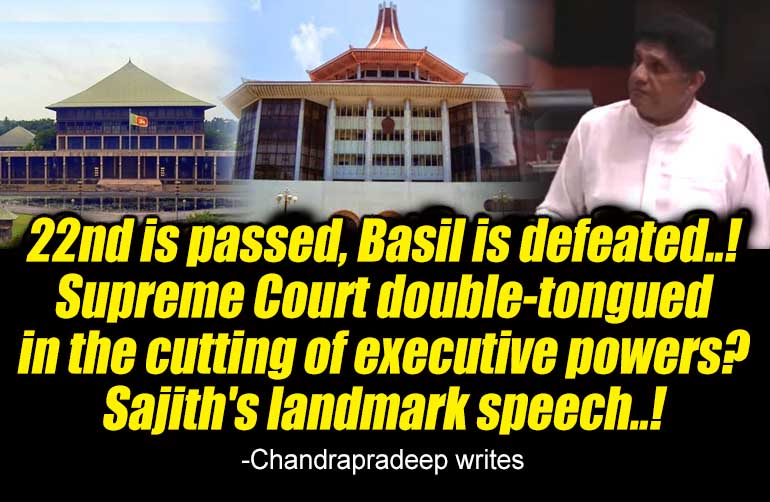 (Lanka-e-News -24.Oct.2022, 11.00 pm) The 22nd Constitutional Amendment presented to the Parliament by the Ranil ‘Rajapaksa’ government was passed on 21 st October with a two-thirds majority of 178 votes. Only Sarath Weerasekera, the brain-dead parliamentarian, who also opposed the 19th amendment, voted against it.

This 22nd Amendment will be called the 21st Amendment from today onward. Because the government did not accept the 21st amendment presented by the opposition and presented another one as the 22nd which was passed today after the 20th.

This 22nd amendment is by no means a democracy enhancer as much as the 19th amendment, which reduces executive powers. But it is slightly more positive than the 20th amendment which made the president a dictator by Gotabaya. Therefore, opposition leader Sajith Premadasa said in his speech that he supports it.  Samagi Jana Balawegaya (SJB) tabled the amendments and was adamant that it would not support them unless the clause allowing dual citizens to enter Parliament were removed. Basil will never be allowed to come back to parliament, but the Pohottu members had to agree to it because, if this amendment is defeated without two-thirds, it will be a defeat for the entire Pohottu party and the power of SJB will be strengthened.

However, the Tamil National Alliance (TNA), which favored the 19th amendment, did not support or vote against it but boycotted the voting. Like the JVP, all the groups that broke away and functioned independently in the Parliament voted in favor of this. A trio of Rajapaksas - Chamal, Namal, and Shashindra also voted in favor.

Here are the 26 Pohottu slaves who avoided voting..

But the boobs like S. M, Marikkar, Hector Appuhamy, Hesha Withanage of SJB, and G. L. Peiris, and Thissa Kariyawasam of Pohottu party, who were former members but now barking at the Pohottu party were absent.  They all knew the value of 2/3 necessary for a constitutional amendment, hence they should tell the people why they were not in the parliament at the time of voting.

Double-tongued judges of the Supreme Court..

The behavior of the Supreme Court in this amendment is also questionable, and biased. It is too duplicitous to accept by the general public. The reason is that for the 19th amendment, referendums were said to be unnecessary in the removal of the President's powers, but this time for the 22nd, referendums are required for 3 amendments. Therefore, those very important amendments had to be withdrawn. As a result, this 22nd amendment does not reduce the executive powers even as much as the 19th. People will feel that the double-dealing of the Supreme Court is responsible for it.

1. The 19th Amendment stated that the President cannot appoint ministers at will without the advice of the Prime Minister. But regarding the 22nd amendment, it has been recommended that a referendum is necessary.

2. The 19th Amendment stated that the President has no power to remove the Prime Minister without the majority consent of the Parliament. But regarding the 22nd amendment, it has been recommended that a referendum is necessary. (If it is the case, Sirisena's action in the 52-day coup is correct. But concluding that it is wrong, it is the same Supreme Court that disrupted the action done by Sirisena at that time.)

With the above three clauses, the powers of the dictatorial presidency, which exists only in Sri Lanka, will be strongly returned to the Parliament. In 2015, the Supreme Court said that referendums were unnecessary for them, but this time it concluded that referendums are necessary for those matters. Therefore, those clauses were removed from the 22nd amendment. What happened is not a reduction in the powers of the executive presidency, but the reassertion of the dictatorship brought by Gotabaya.

Here a very serious question arises about the behavior of the Supreme Court. When Gotabaya brought the 20th Amendment, the rights that the people had received from the 19th Amendment were taken away. But the Supreme Court did not say that a referendum is necessary for that. According to the world standard, when a state gives rights and privileges to the people, it does not ask the people whether they want them or not. But if a state takes away the rights and privileges enjoyed by the people, then the people should be asked about it. Has our Supreme Court behaved according to that standard concerning the 19th, 20th, and 22nd Amendments? Apart from the term "double-dealing", is there any other term to describe this indecent act of the Supreme Court?

Imprudent judges are the misfortune of future generations...

There was a massive people's struggle demanding “system change” that should go beyond 2015. The direction of all the decisions to be taken after that should be the direction of protecting people's freedom, democracy, justice, and rights. Apart from that, it is a misfortune of the future generation that some corrupt and despicable judges in the Supreme Court do not understand that it is not the direction of selfish desires in their polluted minds.

According to the reasoning and methods of law, a conclusion given on a matter at one time may later be different on the same matter. People can understand it, however, if the original conclusion changes, it should be changed not backward but forward. Accordingly, people certainly question the conclusions of the Supreme Court. These have been severely criticized by legal experts today. Therefore, there is no doubt that those men, who take such decisions, will soon be vanished from the earth.

Chief Justice Jayantha Jayasuriya, and Justices Bhuvaneka Aluvihare and Arjuna Obeysekera were the panels of judges who had decided on the Supreme Court regarding this 22nd amendment.

However, in today's debate, opposition leader Sajith Premadasa said that the Supreme Court has not rejected the said amendments and has only concluded that a referendum is necessary, so in an SJB government, they will be approved and established through a referendum. Another statement made in Sajith's speech is that the Pohottu members who said they need "seven brains" then, now show that they are double-tongued. Even if Sajith did not mention it, one thing that people will see here is that the Supreme Court is also double-tongued.

A milestone of Sajith's maturity…

However, we believe that the opposition leader's speech today marked another turning point in his political career. He gave such a wonderful speech shown in the attached video. We request the reader to please listen to it till the end. (The following images show how the members of parliament voted.)

The proposed 22nd Draft Constitution without amendments is shown in the following extension
https://www.parliament.lk/uploads/bills/gbills/english/6261.pdf

The Supreme Court judgment is given in the following extension
https://www.parliament.lk/uploads/bills/gbills/scdet/6261.pdf

Opposition leader's speech is as follows 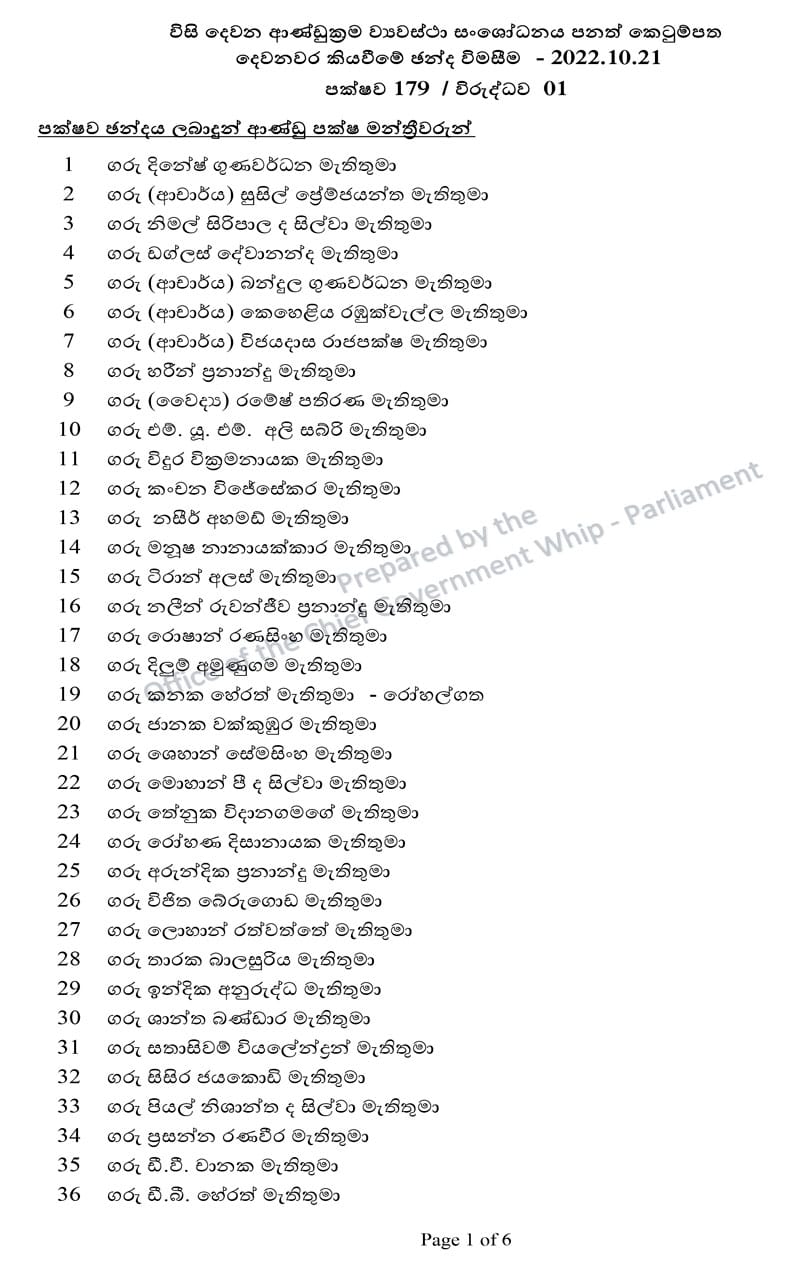 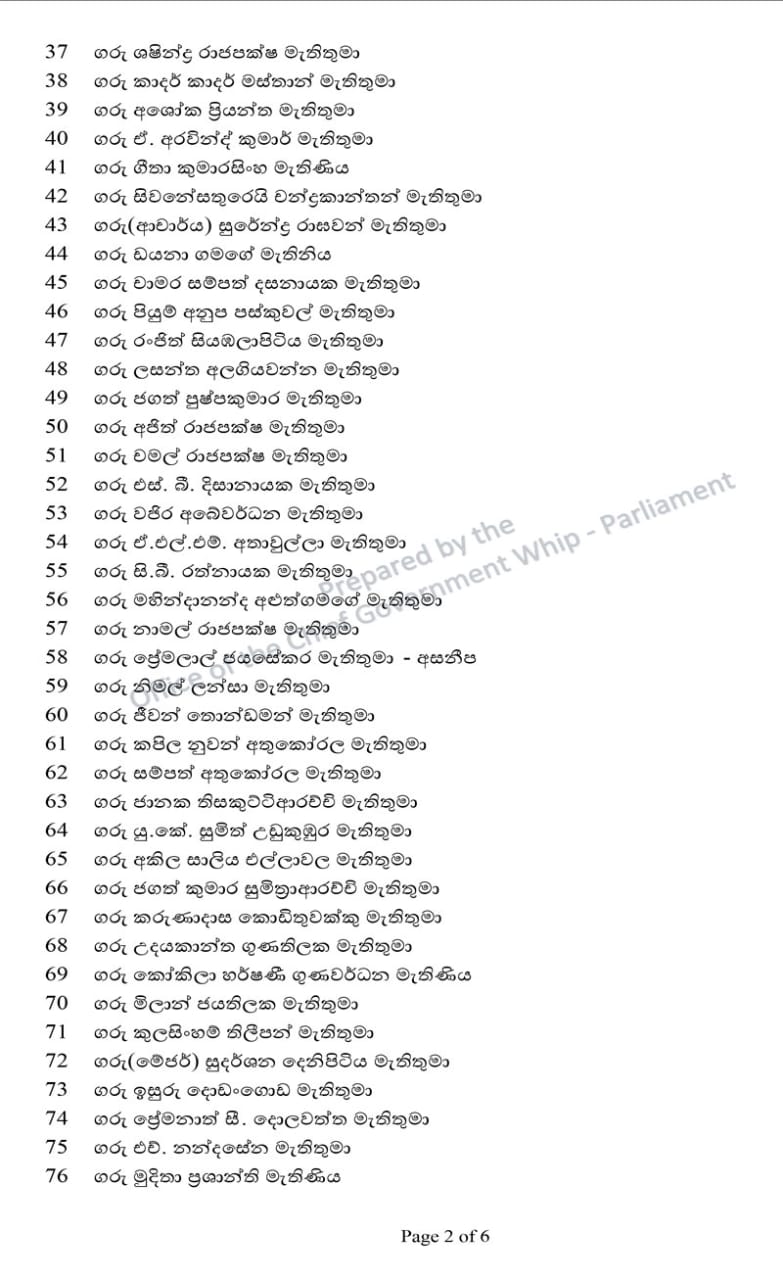 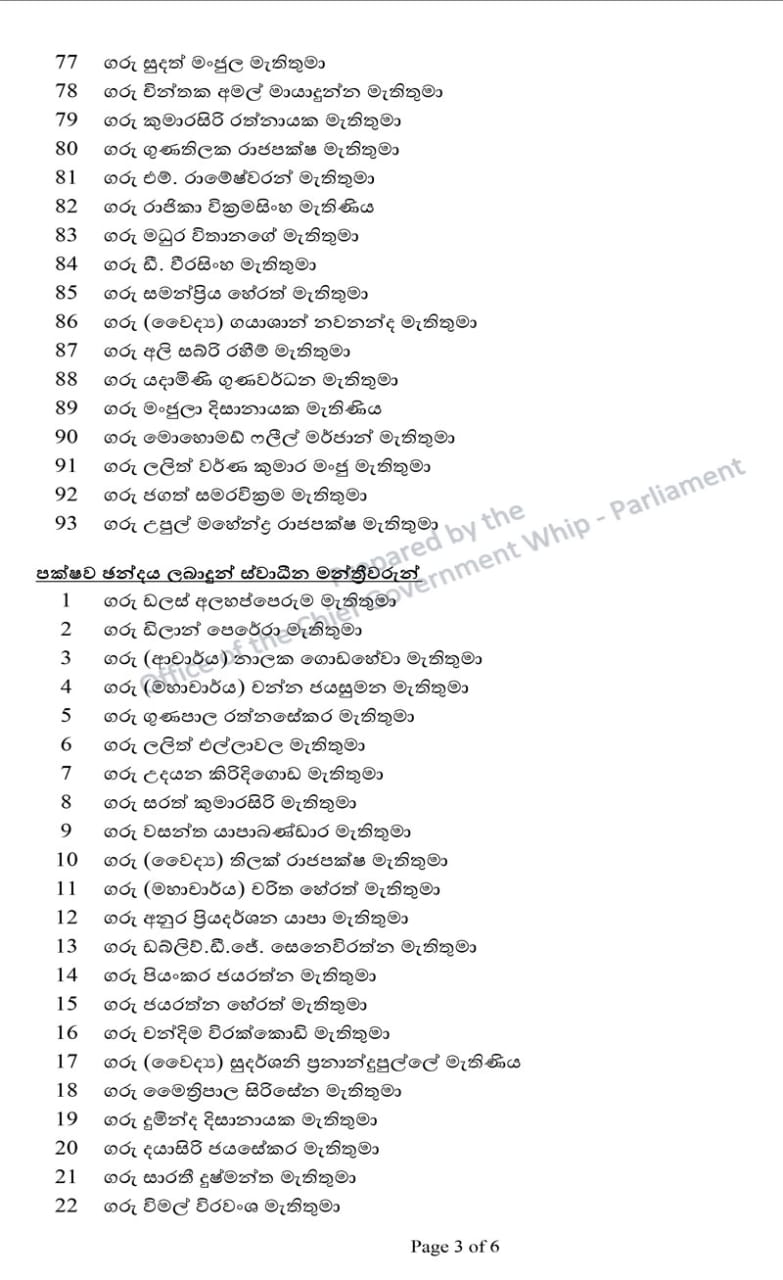 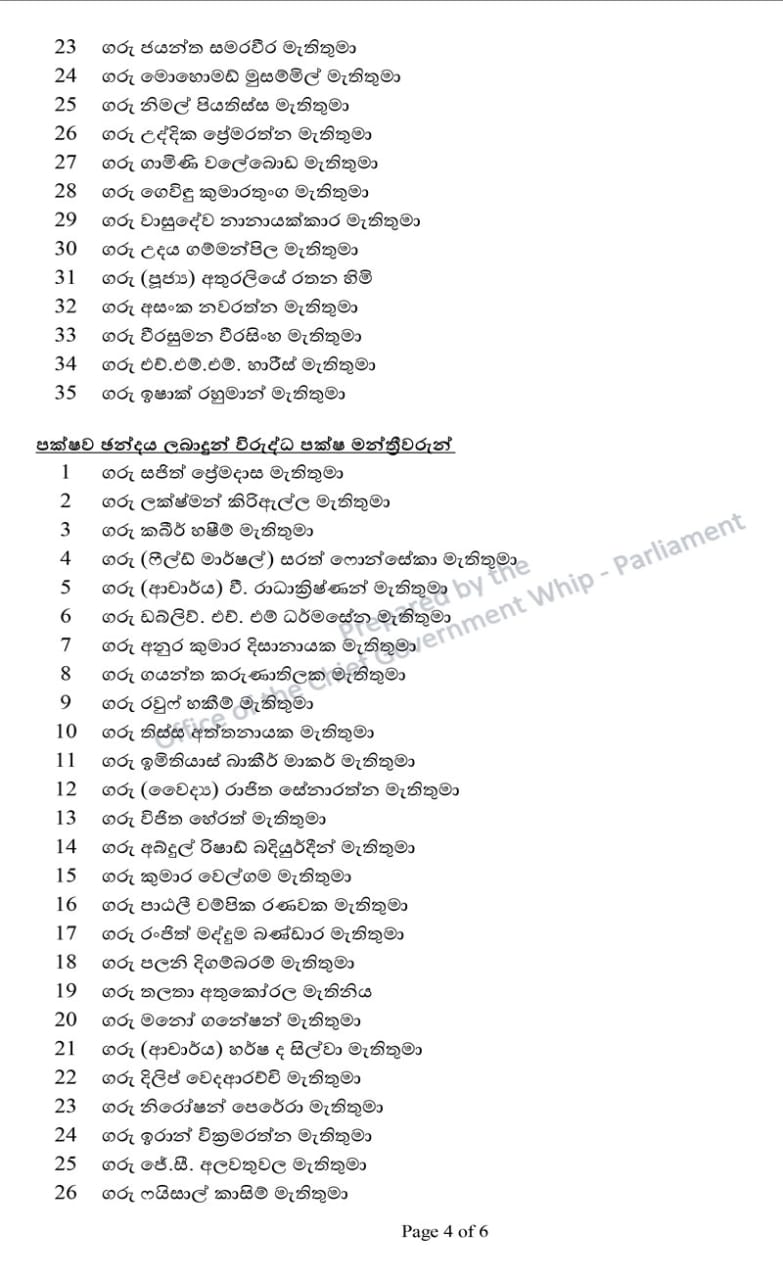 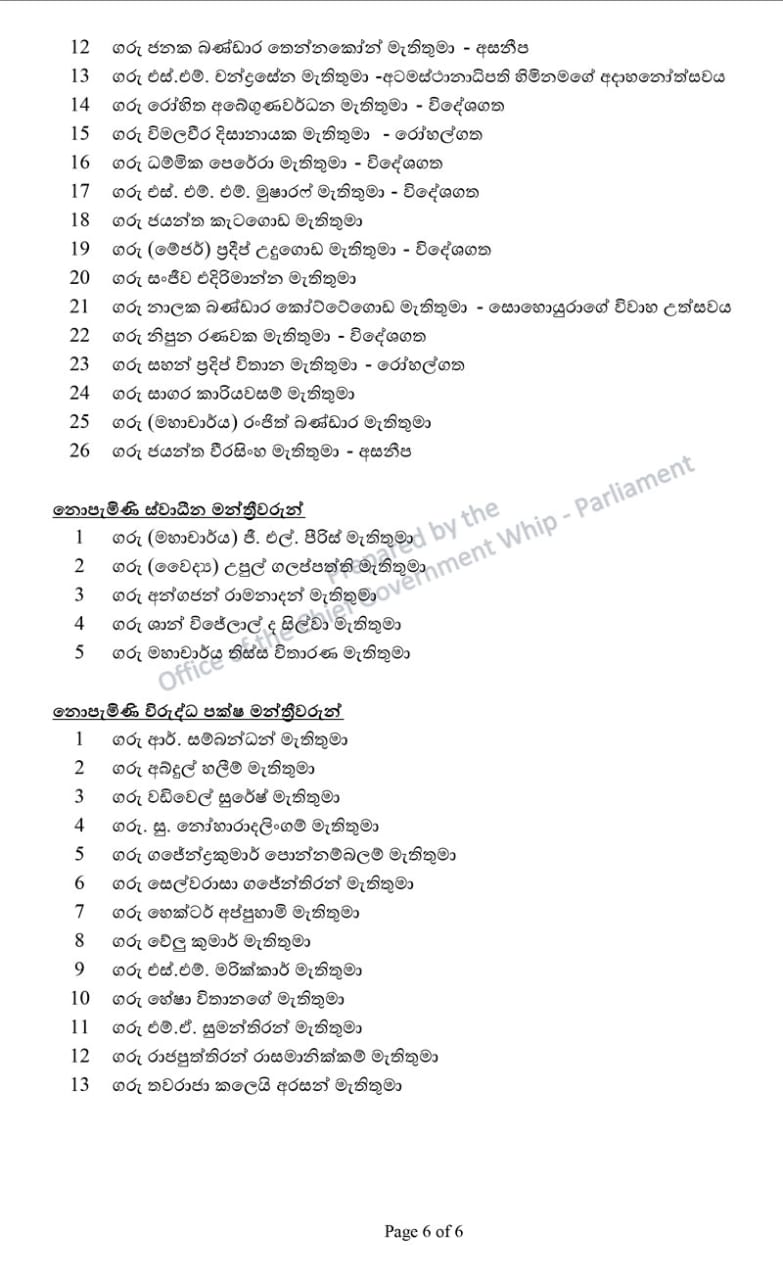