A dog barked at minister was shot..! A chain snatcher is also shot..! Two prisoners were killed as underworld..! Ranil's murderous police state..! 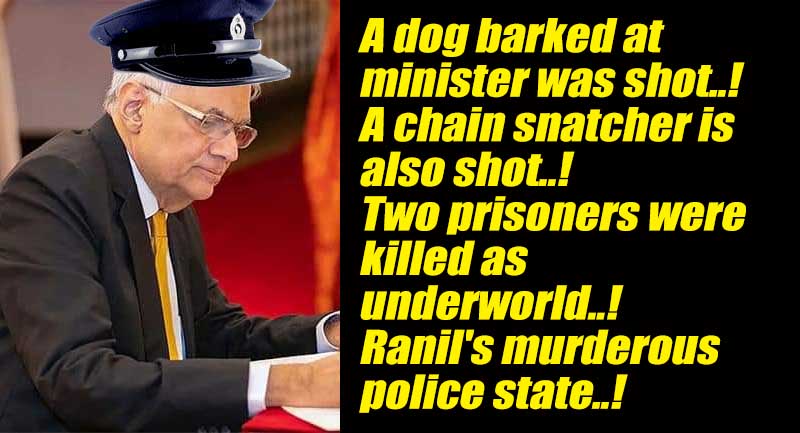 (Lanka-e-News – 28.Oct.2022, 6.45 pm) In Ranil Rajapaksa's Sri Lanka, dogs are now banned from barking. Dogs have to be shot dead if barked at a noble minister. Ranil Rajapaksa government has allowed the shooting of not only the dogs but also the arrested suspects.

Police killings which spread like an epidemic when Gotabaya Rajapaksa was the Defense Secretary have now started under Ranil Rajapaksa as well. On the 12th, the notorious state minister Lohan Rathwaththa, who went on a visit to Jaffna, visited a friend in Velvettithurai. The pet dog in the house, knowing who was coming, barked at the minister. The minister's bodyguards fired several shots repeatedly and killed the dog.

The Sri Lankan newspapers, which publish a brawl of Sri Lankans in New York City on the front page, did not report this animal killing because a dangerous ministerial dog has been involved in the shooting.

This infamous minister once held a pistol to the heads of unarmed suspects in prison and threatened them with death. It happened under the corrupted and murderous President Gotabaya Rajapaksa. This vile minister was also acquitted of that crime.

Now, these are happening under Ranil Rajapaksa's rule. Animal rights organizations have complained to the Velvettithurai police station about the killing, but the complaints are sure to be buried in the sand.

Ranil's police are now doing illegal activities daily. It was none other than Namal Rajapaksa who said that Ranil's liberalism has now been dissolved.

Ranil's police special task force carried a suspect away to show his weapons on the 13th.

The media reported what happened after that, quoting the police media as follows: "In an operation carried out by the police special task force officers, the person named Mahesh Indika Prabhath, who was involved in the shooting incident (that took place in Ahungalla), was arrested. While going to the Balapitiya area to check some of his hidden weapons on 13.10.2022, the suspect opened fire with a firearm hidden in a forest area."

According to the script similar to the old ones, no police officer was injured in the firing and Mahesh Indika Prabhath was killed in the retaliatory attack. The media painted the dead man as a criminal.

The person so killed was not the wanted criminal...!

Not only that. On the same day, the police said another person who died or was killed while under the police special task force was not the wanted suspect.

That incident is that Tuan Sirash, after being arrested by the Police Special Task Force claiming to be the shooter of the former chairman of the Mulleriyawa Pradeshiya Sabha, Sumudu Rukshan murder, went to show the firearm that allegedly committed the crime and "fell" into a quarry and died. ‘Fall' and 'push' might be similar words!

The Special Police Task Force did not explain how Tuan Sirash fell into a quarry and the media reported the story in the same way.

Now the police say that the real suspect was not killed in this way. Now there are two more suspects to be taken to show firearms to the police and according to the script, when they try to shoot at the police while still in handcuffs, they are likely to be shot dead by the police.

Undoubtedly, then the media will cheer!

Although killing a person in police custody is a punishable offense, Ranil's human rights advisors do not see such killing. The illegal killing of suspects is an inherent evil of the police in this country. There will be no investigation regarding these murders and the killers will also get the impunity for crimes in this country.

On the same day (21) the police issued the above statements, they shot and killed a person who tried to run away after snatching a necklace. According to the script, that person has also tried to shoot at the police. That killing was also reported as usual.

Three unlawful killings within a month!

Ranil's police state is becoming a state of lawlessness day by day. Its primary sign is impunity. Impunity means not being punished or having negative consequences for the crime.

As an extension of this impunity, the sons of the super-elite who held a show of high-end luxury cars at the Yala sanctuary went scot-free. The only penalty is banning those vehicles from sanctuaries for three years. What these elite sons will do then is playing with fake number plates. Arrested, but in the end, they will be freed and go home, just like the hooligan vile minister who put the pistol to the prisoner's head was freed.

The police, who wrote a ticket to an ordinary driver for crossing the yellow line on the road, looked away when they saw those rich cads.

Deshabandhu is above the Attorney General…

Lawlessness has become so rampant under Ranil Rajapaksa that even though the Attorney General has recommended it three times, no one was able to transfer DIG Deshabandhu out of Colombo.

Chandra Fernando, a former Inspector General of Police who has been proven before the court to have made illegal decisions as a member of the Revenge Commission, is the Chairman of the Sri Lankan Police Commission.

What human rights are under Ranil's police state?

Human rights activist Siridhamma Thero, who was jailed under the Terrorism Act signed by Ranil Rajapaksa, was not given proper medical treatment for four days; Wasantha Mudalige is being taken from place to place, giving severe punishments. This happens under the shadow of the police state run by Ranil - former butcher of Batalanda (බටලන්දේ මස් වැද්දා).

This society does not stand for the right to the living of the murdered Tuvan Sirash, Mahesh Indika, the young necklace snatcher, or the Velvettithurai dog. In such a society, how will the rights of Wasantha Mudalige or Siridhamma Thero or the rights of the people who come to the streets to protect their democratic rights be protected?