-Council of Ex-Muslims of Sri Lanka 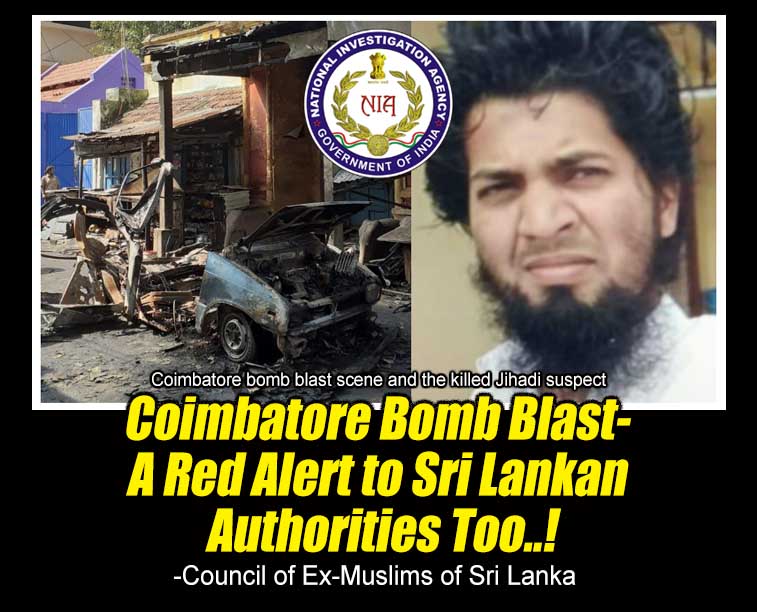 (Lanka-e-News -30.Oct.2022, 6.45PM) October 23rd 2022 a car bomb blasted at the early hours in Coimbatore, Tamil Nadu, India. Initial investigation by Tamil Nadu police found it to be a Jihadist terrorist activity. Following further investigation and arrests, Indian law enforcement has confirmed the finding of links between the Coimbatore Car bomb blast suspects and Sri Lankan Easter Sunday Attack suspects. The chief minister of Tamil Nadu, Hon. M.K.Stalin has instructed to transfer the Coimbatore Jihadist terrorism case to National Investigation Agency considering the severity of the case, citing the possibility of the terrorism connected to the national and international level as the main reason. There is not much coverage in the local media about the Coimbatore attack and local law enforcement has neither released any statements nor made any remarks about the connection between the local ISIS terrorists and their Coimbatore counterparts.

The Council of Ex-Muslims of Sri Lanka (CEMSL) fears the possibility of Jihadism regrouping and growing in Sri Lanka by taking advantage of the local political turmoil. CEMSL warned the authorities by clearly stating one of the factions involved in the Aliyar Junction, Kattankudy fight was pro-ISIS in a statement issued on March 13th 2017. (The statement can be found below). The co-founder and present spokesperson of CEMSL had made a statement to TID in July 2016 about the suspected ISIS activities and the death threats he faced. Years went by and the same group went on doing the Easter Sunday Suicide Attacks, no prevention measures had been taken even though enough warnings were presented by Ex-Muslims and others.

On December 23rd, 2021 a complaint was made to the local law enforcement on behalf of CEMSL with evidence about a spy infiltration into CEMSL, but no feedback was received about any inquiries. The lives of Ex-Muslims are in danger. It was confirmed by intelligence about multiple attempts on the life of Rishvin Ismath, the spokesperson of CEMSL. Rishvin Ismath was threatened by Islamists at the premises of the Presidential Commission of Inquiry in 2020, and the inquiry was not carried forward by the police. Ex-Muslims continuously face threats in the country. Rishvin Ismath is always a prime target by Islamists. There was a call to kill him in mid-May this year, using the unrest and protests escalated in the country. A few days ago, a threat was made against him that he would face the same fate as what happened to Dr. Salman Rushdie recently. It is regrettable to state that no known actions were taken against the threats made against Mr. Ismath. A Bangladeshi ex-Muslim, who is in Sri Lanka as a refugee under UNHCR, faces threats because he was supported by CEMSL. He was followed and photographed together with Rishvin Ismath and the photo was later exposed on social media. Some other ex-Muslims known among the small circles and foreign refugees who are in touch with CEMSL are also in trouble in the country.

Coimbatore was the place where an ex-Muslim was assassinated by Jihadists in 2017. The connection between the suspects of recent bomb blasts and the murder suspects of the ex-Muslim cannot be ruled out. Since many of those who were arrested following the Easter Sunday Suicide attacks were released on bail and acquitted in recent months, the threat level to the ex-Muslims has risen again.

With this, the law enforcement agencies of the country are requested to be on high alert for any possible threats and the growth of Jihadism. It is the duty of the peace loving general Muslim public to expose the extremist elements to the law enforcement.

Council of Ex-Muslims of Sri Lanka