Need to Restrain the Power of Shadow Finance..! 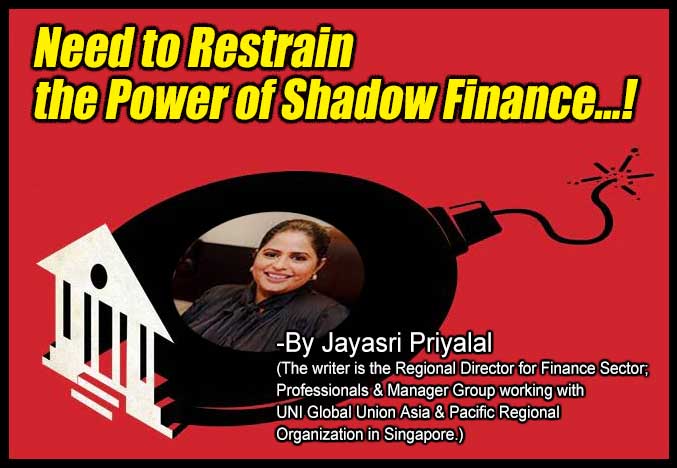 (Lanka-e-News -08.Nov.2022, 11.30PM) Charles Ponzi left his name, creating a legacy for one of the most common financial frauds repeated throughout history. Human weakness of greed has been tapped and trapped by tricksters promising extraordinary returns in the quickest time to investors who ultimately become victims. Ponzi schemes are named after Charles Ponzi, who cheated investors of around US$ 20 million in early as 1920 in Boston. He paid earlier investors by using the money of the later investors, which is now known as a pyramid scheme. He was brought to justice and deported by 1934. A similar case was seen again during the financial crisis in the USA in 2007-08. Bernard Madoff cheated rich and famous Americans, including a few multinational banks, with the same mode of Operandi. Bernard, one-time Chairman of NASDAQ, had a portfolio of US$ 65 billion of his business, assumed to have cheated US$ 20 billion of investors' money. Justice was delivered, and he was sentenced to 150 years in prison on 29 June 2009. Finally, he died at the age of 82 in 2021 in prison.

The lesson to be learnt..

The two case studies mentioned above happened on the eve of propelling an impending financial crisis in the USA. In 1929 the great stock market crashed in the USA, and 2007-08 the financial crisis in North America and Europe. The lesson to be learnt is the inaction to proactively restrain and regulate the power of shadow finance to avert instability in the financial markets. That also happened in developed, heavily regulated financial centres worldwide. Ponzi and pyramid schemes will never die if human greed dictates the individual needs aligned with speculations anticipating fake prosperity.

The world economy is still grappling with the consequences of the financial crisis of 2007-08. The unconventional monetary policies introduced to calm the markets were known as quantitative easing – glorified terminology for printing money. Economic policies with zero or negative interest rates stimulated the markets over a decade. And now the economies have run out of steam to curb the inflationary trends resulting from the excessive speculation backed with cheap money. During the crisis in 2008, the governments threw lifeboats to rescue the ailing and failing financial companies with taxpayers' money. They closed their eyes and offered subsidies to those companies to keep them afloat, against the principles of free market economics. Nevertheless, even then and now, the respective governments were not keen to offer life jackets to the sinking citizens and instead imposed austerities on them. And in many representative democracies, electoral verdicts may become bitter medicine to swallow.

With the advent of the financial crisis, the estimated amount of money printed and in circulation is around US$ 30 trillion—a substantial volume of money chasing behind goods and services not produced in the global economy. On top of that, the COVID-19 pandemic-related economic meltdowns, climate-related disasters, global warming, and energy crisis, plus the war between Russia and Ukraine, send shock waves to policymakers. Regulatory inaction of the concerned authorities was the causal factor contributing to the financial crisis in 2007-08. The unrestrained inflationary trends emerging in many economies are owing to ill-conceived policies with a short-term focus. With the rising energy and food prices across the regions, many are to suffer and lose the gains of quality of life achieved in the past few decades.

Similar patterns and trends could also be unearthed, applying the same analogy to the Sri Lankan context. Unfortunately, the rule of law and the justice system appears weak and ineffective on the island. As a result, building up investor confidence and public trust in the financial system and widening trust deficiencies between the policymakers (all politicians and their political parties) and the citizens complicate the situation further.

The pioneering fraudster who cheated innocent depositors begins with the collapse of the "Pramuka Bank"(2002). Have the regulators and judiciary brought justice to the victims? The perpetrator brainchild criminal is still running Scot-free. The court has not sufficiently challenged regulatory laps leading to this debacle. How did the regulators and monetary authorities grant a banking license to a person with questionable integrity? Since then, numerous cases in Sri Lanka, private finance companies, and infamous Sakvithi and Danduwam operations have scammed millions of rupees.

"Aragalaya" for a system change..

"If you do not know how to fix the problems, please don't break the system any further": the clarion call of the millennials and the young generation of Sri Lankans. They have fully realized the impending dangers of the fragile socio, economic and political system in the country. This author salutes and commends those who joined the "Aragalaya" for a system change in Sri Lanka. Their struggle on the streets since April 2022, and outcomes have reversed the lopsided popular mandate stolen during the 2019 Presidential election and 2020 General election. The resignation of the Prime Minister on 9 May and the running away of the elected executive President on 9 July itself indicates that no government is currently in charge of representing the people's mandate.

The whole world, donor community, UN agencies, and IFI are aware of this situation, except for a few bankrupt politicians who lack the originality of thought to address the grappling issues, trying to balance power in an illegitimate governance structure.

In such a political vacuum, the civil servants, judiciary, and regulators must take the lead to arrest any further deterioration of the unfortunate situations until a legitimate government with a legitimate mandate is elected. When politicians and their accomplices interfere and challenge the independent judgements of professionals, they cannot remain silent, blaming politicians for all sins and witnessing the downturn of our economy.

Also, Sri Lanka practised unconventional monetary policy tools in the past by maintaining lower interest and exchange rates. Artificially lower rates enabled highly connected personalities to emerge as shrewd businessmen and women to appear to offer extraordinary returns to the public for their deposits. The CID has taken into the custody of Ms Thilini Priyamali, who had been running a luxury business at the World Trade Centre under Thico Group Pvt Ltd, for alleged financial fraud. It appears she has cheated high net worth persons, including politicians with ill-gotten wealth.

Hype activities of shadow finance are an indication that may pave the way for some form of financial instability to unfold in Sri Lanka. At the same time, Ceylon Bank Employees' Union has launched a campaign to oust the Chairman of the Bank of Ceylon and insisting on a forensic audit for alleged corrupt deals carried out with the connivance of the policymakers.

When there is a weaker administration and no governance, such uncertainties may erode public confidence in the entire financial system, as many of these high-volume transactions are interconnected. Many of the listed companies in the Colombo Stock Exchange also run businesses with some access to accept public deposits. Innocent depositors are deceived by the name fame of these entrepreneurs close to their political masters for insulation and refuge. It is not a secret that many of them supported the election of President Gotabhaya Rajapakse with an ulterior motive of state capture. Accordingly, they, too, got the lifeboats to their rescue and millions of vulnerable populations to abject poverty, and no one was there to offer them life jackets.

Regulators must take proactive measures to analyze the viability of the business models of those accepting deposits from the public. They should investigate the links between the businesses and the various cash flows generated to serve the public, averting possibilities of hidden Ponzi/Pyramid schemes. Many conglomerates are into a multitude of companies, such as running supermarkets and real estate with easy access to cash flows. Some of them also own banks.

Sri Lankans depend on professionals and their independent judgement while serving the public for stable economic and social conditions. Failure to highlight the irregularities and regularise them timely will undoubtedly spoil the chances of various IFIs coming to our rescue. At present, politicians are praying for IMF assistance. They have no other alternatives, at least to offer some direct cash benefits to the vulnerable communities who are finding to survive without sufficient food.

"poverty anywhere is a danger to prosperity everywhere"..

We all must be hard on the problem and soft on those people who are contributing to the mess. The final point is not to underestimate the power of the shadow finance industry; it can create havoc, impacting financial stability at a crucial time and a critical juncture. But justice, the rule of law and fair play must be reinstated for social order. The absence of an independent judiciary will undoubtedly discourage any foreign investor from thinking of Sri Lanka; institutionalizing a new social contract is a priority.

Let those money launderers -fake investors-forewarned that blockchain technology in the pipeline would make life challenging to speculate for quick returns. Digital currencies are coming up; central banks are keen to introduce digital currencies with government-back guarantees, and NEO banks' alternative finance are preparing to bridge the trust deficiencies in uncertain markets. Hiding wealth and avoiding tax payments have to be arrested for mitigating the growing social disorder due to widening income, wealth, education and health inequalities.

In conclusion, let me quote a phrase from the famous Philadelphia declaration (1944): "poverty anywhere is a danger to prosperity everywhere".