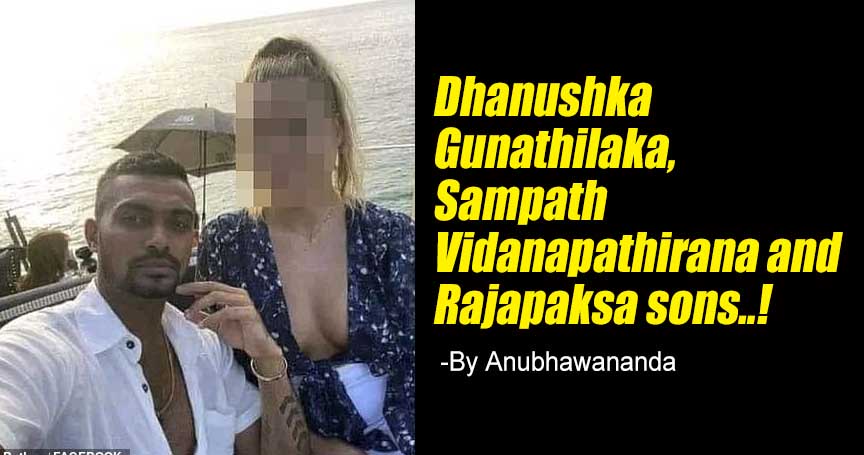 Arjuna Ranatunga was a member of the first-class team of Ananda Vidyalaya when he participated in the first test cricket match in 1982. Then his age was 18 years. This schoolboy showed his talent by scoring a half-century in the first test match. After Arjuna, many talented players like Aravinda, Mahanama, and Gurusinghe walked on the same road.

By the mid-eighties, another ‘Arjuna’ had emerged from Ananda Vidyalaya. His name is Amaratunga Arachchige Duminda Sunimal Perera. He became famous in the field of cricket as Duminda Perera. He inherited cricket from his father. His father was a talented batsman who represented the first-class team of Ananda Vidyalaya as well as the team's wicketkeeper. Duminda is also a good left-handed batsman and a spinner. The way he hits the ball is fantastic. Sports commentators praised his batting. They compared the way he used his wrist to hit the ball with Roy Dias, who represented the national team at that time. Sports journalists noted that it was only a matter of time before Duminda represented the Sri Lankan team.

Confirming that prediction, in 1986, Duminda Perera was selected to represent the Sri Lanka under-19 team. It was for a trip to England. Asanka Gurusinghe was the leader of that team. Duminda, sixteen years old at that time, was the youngest player in the team. Duminda showed his usual performance from the start of the England tour. Having played the first two matches, he played three innings and scored 132 runs, including two half-centuries. But unfortunately, he could not participate in the third match. He was found guilty of shoplifting a shirt while shopping out with other members of the group. Even if it is a minor incident, it is an act of indiscipline.

The era that gave high value to the discipline of cricket…

The Sri Lanka Cricket Board recalled him immediately. The cricket authorities immediately conducted a disciplinary inquiry into the incident and Duminda Perera was banned from cricket for two years. Although he returned to the game after a two-year ban, he was unable to display his previous rhythm and skills. This is how the country lost a great player who could have represented the Sri Lankan national team. Duminda Perera's offense at that time was negligible compared to today. But at that time the discipline of cricket was highly valued. Arjuna Ranatunga, created by that discipline, won the World Cricket Cup for Sri Lanka in 1996.

This is not the first time that Dhanushka Gunathilaka, an accused of rape in Australia, has behaved in this way. Before this, he was accused on many occasions of drunken fights in nightclubs and forced sexual pressure on women, but the cricket authorities did not take any disciplinary action. Sri Lanka Cricket has taken steps to impose a match ban against Dhanushka Gunathilaka after the Australian rape allegations. Before this, he was banned three times due to indiscipline, but all those decisions were withdrawn due to political pressure.

How Namal the cad threw cricket discipline away…

The last time Dhanushka had to face a suspension was during the last tour of England. He was guilty of bursting the bio-bubble on that tour of England. Kusal Mendis and several others were also found guilty at that time, and the cricket authorities imposed a one-year ban. But then Sports Minister Namal the cad intervened and reduced the ban to six months. The ban imposed for domestic matches was completely removed and the players were brought back to the team. That is how Namal the cad instilled discipline in cricket.

Harmony and connection between Rajapaksa family and rapists…

Namal the cad again stood for Dhanushka Gunathilaka this time when he was arrested in Australia for rape charges. On behalf of Dhanushka Gunathilaka, Namal the cad pressured the heads of the Sri Lanka Cricket Institute to provide legal assistance at the expense of the Sri Lanka Cricket Institute. Not only that but this cad influenced the Sports Minister Roshan Ranasinghe, too.

Amal Harsha, the Secretary of the Sports Ministry, revealed to the media on the 8th Tuesday that the Ministry of Sports, which is currently subject to that Namal the cad’s influence, has decided to provide legal assistance to Dhanushka Gunathilaka with the people's tax money. It is a wonderful punishment. The Rajapaksa family and the rapists have a bond like the bark of a tree. One example of this is how the chairman of Tangalle Pradeshiya Sabha (local council), who was accused of rape and murder, was defended by the well-known three louts Mahinda, Gotabaya, and Namal.

Sampath Vidanapathirana was hidden and protected in Medamulana whore house…

On the night of Christmas Day 2011, British national Khurram Sheikh was shot dead and his Russian girlfriend was gang-raped in a southern tourist resort. Sampath Vidanapathirana, the chairman of Tangalle Pradeshiya Sabha, and his gang of thugs were involved in this heinous crime.

Sampath Vidanapathirana is a close friend of the Rajapaksa family including Mahinda Rajapaksa. This attack on British and Russian tourists, who are among the five superpowers of the world, immediately turned into international news. The British and Russian embassies in Sri Lanka immediately intervened in this incident. The then President Mahinda Rajapaksa and the Secretary of the Ministry of Defense Gotabaya Rajapaksa immediately intervened and prevented the arrest of their close friend Sampath Vidanapathirana in connection with this incident. He was kept hidden in the Medamulana brothel for a few days and then hidden elsewhere.

How the rapists were protected…

The police were inactive saying that investigations were being conducted to arrest Sampath Vidanapathirana. At this time, Western countries led by Britain forced the Rajapaksa government to properly implement the law regarding this incident. In the face of this influence, the Rajapaksa government was forced to arrest the murderers including Sampath Vidanapathirana.

The arrested murderers including Sampath Vidanapathirana were granted bail without any objection in the court. Sampath Vidanapathirana resumed his work as the chairman of Tangalle Pradeshiya Sabha like a hero. The Rajapaksa did not offer to conduct a disciplinary investigation on him at the party level. Various obstacles were also put in place to take judicial action. Accordingly, the Attorney General did not come forward to prosecute the murderers including Sampath Vidanapathirana. Representatives of the British government and the victim's family members came to Sri Lanka several times, trying to get a fair trial in this case.

An incident similar to the Dhanushka Gunathilake’s also occurred during the Sri Lankan team's visit to Zimbabwe in June 2010. At the end of that trip, a day before they were to come to Sri Lanka, Tillakaratne Dilshan the team captain, and Jeevan Mendis, and Dilhara Fernando, kidnapped a 17-year-old chit of a girl and raped her. The Harare police found that Dilshan was the only one who raped her and all three were arrested by the police. At that time Sri Lankan cricket was controlled by an interim governing body chaired by D. S. De Silva.

Immediately after the incident, then President Mahinda Rajapaksa intervened and gave a bribe of 13,000 dollars to the Harare police and freed the three players from arrest. Even today, Dilshan has no mandate to go to Zimbabwe because he is forbidden to enter there. Jeevan Mendis is Namal the cad's collegemate. After this incident, Dilshan became a slave of the Rajapaksa gang.

Dhanushka is a Rajapaksa product…

It is not surprising that the Rajapaksa family with such a history advocated for Dhanushka Gunathilake. Dhanushka is a creation of Lumpan hooligan politics established in the country by the Rajapaksa regime for more than two decades; a true representation of their Sri Lanka Padada Party (SLPP). Dhanushka Gunathilake's unique talent is not in cricket; they are an anti-social approach, disregarding the supremacy of law, changing all legal decisions to one's own through political influence, etc.

Dhanushka came to the team stealthily…

Dhanushka Gunathilaka has a place in the team not because of talent but because of political and other influences. He has participated in 16x T-20 matches this year and scored 173 runs. The average is 10.81. In the year 2021, the number of T-20 matches he participated in is 6. The total score is 95. A player infamous for his lack of scores and indiscipline has been allowed to compete in the T-20 World Cup. It reveals the current dirty, corrupt form of our cricket. Also, how the Rajapaksa regime has destroyed the social system of this country in the last two decades.