"I am not bound to carry out your illegal orders..!" - SSP says to Police Minister and leaves the meeting..! 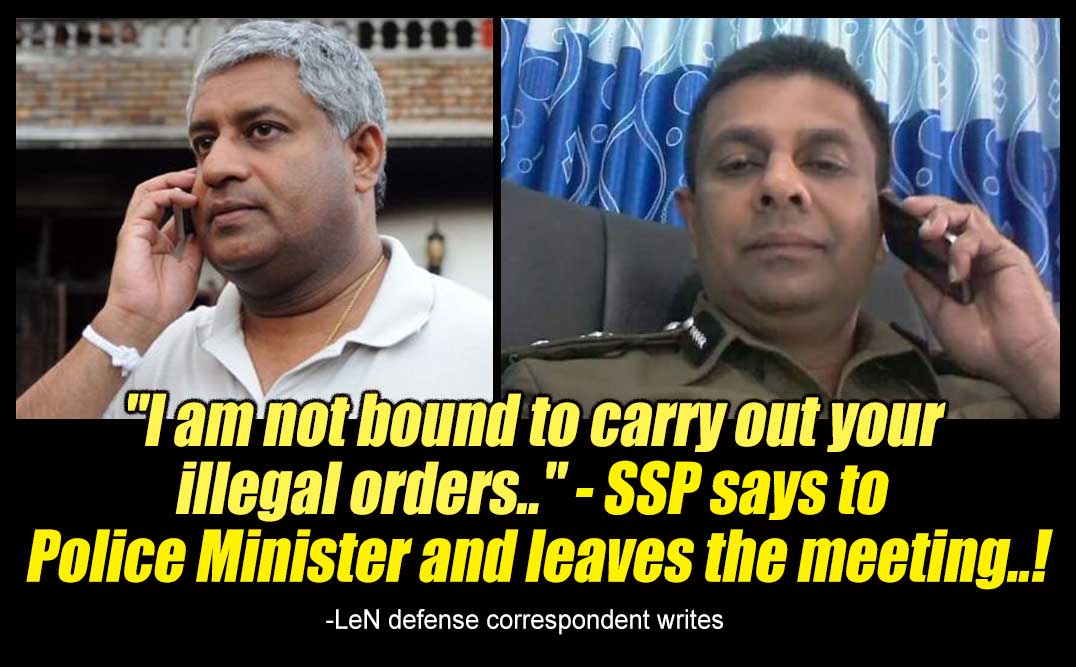 (Lanka-eNews - 18.Nov.2022, 5.30 pm) It is happy as well as rare news that a Senior Superintendent of Police said to the face of Police Minister Tiran Alles that he is not bound to implement illegal orders, and then left a meeting of the Minister of Police.

According to reports, the incident is as follows.

There, Tiran Alles has said that those holding anti-government demonstrations should be arrested. Accordingly, Tiran Alles has scolded the police for not arresting the women who went to the United Nations office in Colombo the Monday (14) and not dispersing the protest there and another protest in front of the TID with baton charges. He then asked who the SSP in charge of that area was and told him to get up. Then Colombo South SSP Gayantha Hasantha Marapana stood up.

Senior Superintendent of Police Deshabandhu Thennakoon ordered SSP Gayantha Marapana to arrest a woman including Hirunika who walked to the United Nations office yesterday (14), but he did not implement the order. And then Deshabandhu bypassed all the SSPs and SPs and ordered directly to the OIC of Kurunduwatta Police. Accordingly, the women were arrested. Hence, Tiran Alles was very angry with SSP Gayantha Marapana.

When SSP Gayantha Marapana stood up, Tiran asked him why the women were not arrested that day and threatened him to leave the police force or wait for transfers if there is anyone who could not carry out his orders.

SSP Marapana responded by asking, "what is the charge" and said that he cannot face human rights cases by ordering to arrest the people without charge. Then Tiran Alles, who turned to the Inspector General of Police, asked, "Why is there no charge? Is opposing the government not a charge?" Inspector General of Police Wickramarathna stammered and said that it was not an accusation.

Tiran Alles who was then angered said that, if he could not carry out his orders, he would leave the police force. SSP Marapana replied that he joined the police as an SI and became an SSP not by executing illegal orders and that no police officer is bound to execute illegal orders. He then left the Minister’s conference.

However, when Lanka-e-News inquired about the incident from one of the lawyers' associations, they said that their association will appear free of charge for the police officers who are oppressed by going to implement the law correctly. Therefore, the said Bar Association further said that there is no reason for any police officer to be afraid to put aside the illegal orders of rogue politicians and implement the law correctly.

An SSP of an outside province who commented on this matter told Lanka E News that Tiran Alles, who orders illegal arrests today, will also order the release of arrested criminals and drug traffickers on the other side. Therefore, he said that SSP Gayantha Marapana should be respected by all law-abiding police officers.