260 Police OICs transferred in a flash..! IGP and DIGP refused to approve..! First time in history, the police takes bribes from the police..! 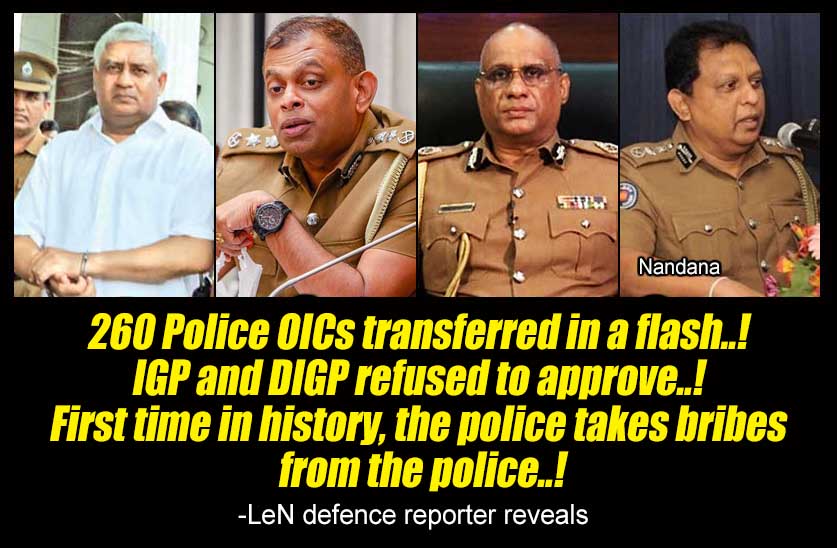 The first reason for transfers in a flash..

We call this 'sudden transfers' in the history of Sri Lanka Police because we have the facts.

One is that for the first time in history, the police took bribes from the police to “offer good police stations” in these transfers. SP Gunarathna, the former OIC of Kollupitiya, who is currently the police station coordinator in Tiran's office, spoke to each of the OICs and arranged the bribes. Gunarathna has been a chum of Deshabandhu for a long time. The former does all the collection of Deshbandhu's bribes on a monthly or weekly basis. (We have revealed this earlier. If necessary, read https://www.lankaenews.com/news/ 14054/si)

Breaking the chain of command..

The Minister of Police carries a directory of the names and telephone numbers of all the OICs in the country everywhere he goes. The reason is to 'bypass' the standard process of giving relevant orders first through the Inspector General of Police and then through the rest of the official hierarchy. Tiran speaks to the OIC concerned directly giving orders. After the arrival of Tiran, a traitor who knows nothing about the police, the 'official chain of command' of the police has broken down. One of the reasons for the Easter bomb attack was that the then IGP Pujitha Jayasundara himself broke this 'chain of command'. Further, Tiran and Deshabandhu have now introduced a most indecent process of taking bribes and giving transfers.

The second reason for transfers in a flash..

After Tiran and Deshabandu submitted the prepared list of transfers based on the bribes they both received to the IGP, the IGP did not approve it. After that it has been submitted to the Senior DIG (Administration) Nandana Munasingha. But he also refused to sign it. Thereafter, going completely outside the official state process, Tiran Alles has threatened the Deputy IGP (Administration) Sisira Kumara over the phone to sign the list of transfers and implement them from today. Accordingly, the transfer list was signed not by the first or the second holder of transfer authority, but by the third, DIG Sisira Kumara. Because of this, OIC's are working to present a fundamental rights petition against these transfers, claiming them to be illegal.

OIC Kurunduwatta Alokabandara Senanayake, who is Tiran Alles' number one myrmidon, has not been given a transfer while two hundred and sixty have been transferred. The reason for that is that he arrested Hirunika while SSPs and ASPs said 'cannot'.

Chief Inspector of Panadura police, Harrison, has also been given a transfer to Grandpass. Unlike Panadura, Grandpass is an A grade police station. The person who becomes the OIC of such a police station gets something like a promotion. OICs of A-grade police stations get priority when getting the next post of Assistant Superintendent of Police. This Harrison is none other than the infamous cop who grabbed a policewoman by the neck and pushed her, and harassed and arrested two women engaged in protest march in Panadura.

There are lots of unusual transfers. Officials who work in specific fields are required to be promoted in the same fields, instead they have been transferred as OIC's in distant provinces.

Some examples are Chief Inspector of Police S. P. N. Silva has been transferred from CID to Beliatta Police Station, CIP Ekanayake from Western Intelligence Division to Yatiyantota, CIP Sanjeeva from the same division to Kadugannawa, and CIP Rangana from Illegal Property and Assets Division to Weyandoda, CIP Nissanka from Homicide and Organized Crime Division to Dompe, and CIP Senanayaka from Police Special Bureau to Saliyawewa.

A preparation for a corrupt election..!

The direct message given by traitors Tiran and Deshabandu to the OICs today is that they will protect them if they follow their orders. It is clear that this is a preparation for a corrupt election.

Honest officers conducting drug raids will also get transfers in the near future. The reason is Tiran and Deshabandu are the drug dealers who represent the Sri Lanka Police.