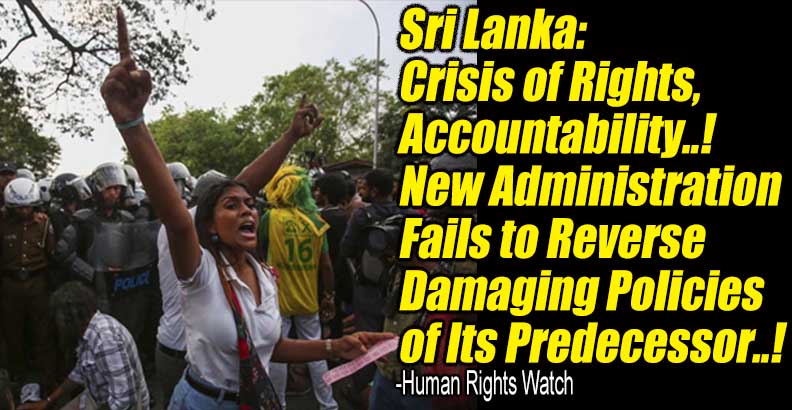 During 2022, thousands of Sri Lankans took to the streets after years of misrule, impunity, and corruption undermined the rule of law and contributed to a severe economic crisis that threatened millions. President Gotabaya Rajapaksa, long implicated in grave rights violations, stepped down in July. However, the new president, Ranil Wickremesinghe, cracked down on largely peaceful protests, imprisoned activists, and disregarded calls for justice for past violations.

“President Ranil Wickremesinghe responded to calls for reform and accountability with repression,” said Meenakshi Ganguly, South Asia director at Human Rights Watch. “The foreign partners that Sri Lanka needs to help address its economic crisis should insist on fundamental human rights reforms and respect for the rule of law.”

In the 712-page World Report 2023, its 33rd edition, Human Rights Watch reviews human rights practices in close to 100 countries. In her introductory essay, acting Executive Director Tirana Hassan says that in a world in which power has shifted, it is no longer possible to rely on a small group of mostly Global North governments to defend human rights. The world’s mobilization around Russia’s war in Ukraine reminds us of the extraordinary potential when governments realize their human rights obligations on a global scale. The responsibility is on individual countries, big and small, to apply a human rights framework to their policies, and then work together to protect and promote human rights.

Sri Lanka’s economic crisis deepened when the country defaulted on foreign loans in April. On September 1, the International Monetary Fund (IMF) announced a staff-level agreement to provide a US$2.9 billion bailout, but the funds cannot be disbursed before Sri Lanka reaches a debt restructuring agreement with international creditors. Food price inflation reached 85 percent in October. The United Nations said that 6.3 million people faced food insecurity and that the poverty rate had doubled.

President Wickremesinghe’s government has cracked down on dissent, including by using the notorious Prevention of Terrorism Act (PTA) to arbitrarily detain student activists. Although superficial amendments were made to the law in March, following years of domestic and international pressure, the government continued to stall on repeated commitments to repeal the law.

The European Union played an important role urging the Sri Lankan government to comply with its human rights obligations under the EU’s Generalised Scheme of Preferences Plus (GSP+), but pressure needs to be intensified to secure concrete progress, Human Rights Watch said. Calls by the United States and others to respect the right to peaceful protest were largely ignored.

In October, the United Nations Human Rights Council adopted a resolution expressing concern for the human rights situation and mandating enhanced UN monitoring, as well as renewing a mandate for the UN to collect and analyze evidence of past human rights violations, including attacks on Tamil civilians during and since the civil war, which ended in 2009, for use in future prosecutions. The government has rejected calls for truth telling and accountability, including by the group Mothers of the Disappeared, which passed 2,000 days of continuous activism in August, demanding to know the fate of their missing loved ones.