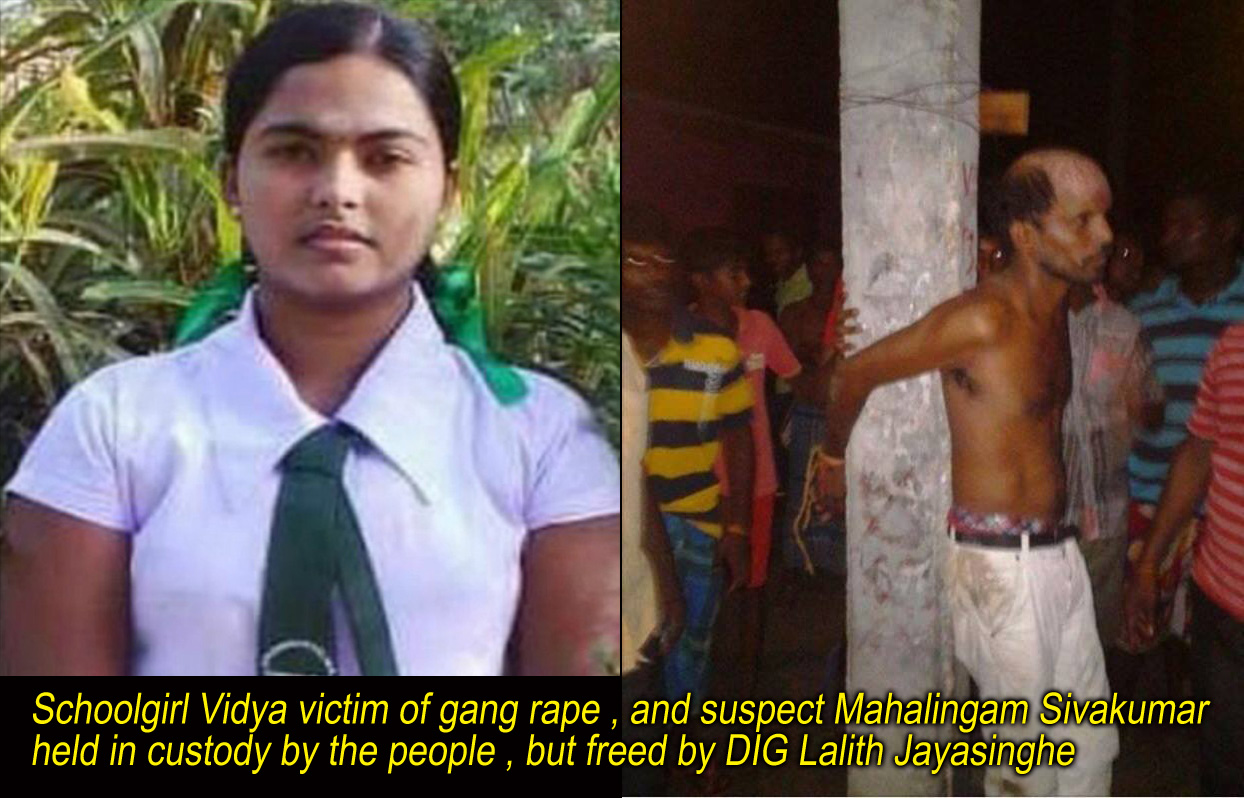 (Lanka-e-News- 22.May.2015, 6.20PM) The extremists of the south who are  giving a mischievous twist  even to the public protests sparked following the recent gang rape and murder committed on a school girl of Poonguditheevu Island in the north , as signals of an LTTE revival in the north have been proved absolutely false. Though the aims and objectives of these extremists are  to create the impression the public protest staged , the brutal rape and murder are signs  of LTTE resurgence in the north ,according to reports reaching Lanka e news inside information division, the brutal rape and murder, and  the police conduct in regard to that crime  are part of a conspiratorial plan of the extremists of the south.

What most rudely shocked and provoked the public was the release  of the prime suspect in these  crimes by the police even after the public helped the police by apprehending him and entrusting to the custody of the police.

Based on information reaching Lanka  e news the true picture is as follows :

The victim , 17 years old Sivayoganathan Vidya is from an extremely poverty stricken family from Poonguditheevu Island. Her father is paralyzed , and her sister is a University student while the victim was also hoping to enter the University . On the 13 th when Vidya did not return home after school , the parents and relatives had complained to the police , when the police gave a stock and irresponsible answer, ‘she must  have eloped with her lover. She will return in a few days.’

Though Poonguditheevu is an Islet belonging to Sri Lanka (SL), it is away from the latter .Since 1990 as the LTTE were controlling it , the rich and educated inhabitants left the Islet. After the LTTE was defeated , and the Islet was recaptured by the forces  , only a few of the inhabitants, about one third returned to this Islet. Many of the abodes of the rich and the educated when they returned were in a dilapidated state . By now this Islet is a paradise for illicit businesses involving SL and India. It is a hub specially for heroin trafficking . Mahalingam Sivakumar alias Kumar is a heroin baron who as well  engaged in other illegal activities ,and a resident of Poonguditheevu.

The remains of Vidya was found in a jungle en route to her school by residents. The police took a reprehensible lethargic attitude because it was their smug   belief that the victim fled with her lover. Following the detection of the body of Vidya , the residents apprehended  three suspects , and based on information elicited from them , it became clear that Mahalingam Sivakumar was the prime suspect behind this gang rape and murder. The residents then  captured Mahalingam and handed over to the police.

Mahalingam and the three other suspects have first abducted the girl, and raped her . Thereafter had arranged for five others  to gang rape her again after inviting the rapists via phone. The police finally  arrested nine suspects in all.

One of those among the educated who left Poonguditheevu earlier on was Tamilmaran  , a lawyer . He is now a Dean of a faculty of the Colombo University .Tamilmaran who is aspiring to contest the Poongudutheevu electorate at the next election has entered this  rape scenario. The senior DIG Lalith Jayasinghe in charge of the North being   a  bosom pal of Tamilmaran , the latter    has told Jayasinghe that Mahalingam who is in custody is a relative of his , and had returned to SL from Switzerland where he was previously staying. He is  therefore innocent  and  to release him. Jayasinghe complying has freed Mahalingam , who then fled to Colombo.

The news of these brutal crimes spread among the people of the north like wild fire and they were furiously enraged over the release of the rapists and murderers handed over to  the police by the residents. Meanwhile the residents who were in an explosive and justifiable rage held Tamilmaran , his daughter who is here on a holiday having come from London where she is studying ,and  some others as captives and demanded that the criminal be handed over to the police immediately if the captives are to be released. After about five and half hours , Mahalingam was taken into custody by the police in Colombo. However the residents did not trust that information . In any event Tamilmaran was released by the people later . The outraged public who went in a procession the following day had hurled stones at the court in this backdrop.

It is to be noted that the senior DIG Jayasinghe is a top order bootlicker and lickspittle of the Rajapakses . His squalid nature can be gauged from the fact that the Rajapakses used him well and thoroughly earlier on  to carry out all their illegal and criminal activities after  planting him in the south. On the 18th and 19 th of May when the people of the north were commemorating those who died in the war , these brazenly wrongful actions  of DIG Jayasinghe provoking the people and inflaming their feelings is certainly not  without  an ulterior motive. This was  not just a compliance with the request of Tamilmaran , but a cold calculated diabolic move to stir up unrest and incite the people.

While the intelligence divisions were well aware ahead that the people were going to go in a massive protest procession , Jayasinghe took no measures to avert it peacefully . Instead he allowed the infuriated people  whose feelings were running high to act , and then by taking obnoxious measures to stifle them , he aggravated the situation deliberately thereby precipitating  a near civil  rebellion. A majority of those subsequently  arrested in  hundreds  were innocent and who were never involved in the protests. Among those were  several  fathers and children who were pedestrians and passers by not involved. Hence , this was nothing but  another calculated attempt to create unrest among the people of the north and had been orchestrated by Jayasinghe himself.

If there was  a commotion   in the north , it  was none other than DIG Jayasinghe who gleefully and promptly passed the message to the Rajapakses in Colombo. It is worthy of probe whether this  rape and murder committed in the north coinciding almost with  the time of the commemoration  ceremonies on 18 th and 19th is part of a conspiracy to create mayhem and pandemonium in the north.

In any case though the situation is apparently calm now in the north , with this story spreading to the Vavuniya east , the people there are staging hartal after closing the doors of their shops. The IGP who traveled to the north today entrusted the investigation of this gang rape and murder to the CID. If the media in SL had been publishing the truths from the beginning this unfortunate  situation would not have resulted.

What the State media which are unable to expose the true picture owing to their  utmost   unscrupulousness and sordidness ,and the JHU racists want are  not to convey  the factual situation to the people or to reveal the truths to the president . Instead  based in pursuance of  their racial agendas portray  themselves as great heroes (cardboard heroes) before  the people.

In a  media website  a photograph was posted in which the criminal Mahalingam was posing with Mahinda Rajapakse and Douglas Devananda, but that is a doctored photograph. In the original photograph , it is ‘Swiss Ranjan’ residing in Switzerland an opponent of the LTTE who is there.

By a special reporter of LeN inside information division .
Translated by Jeff

Thank you for publishing this uncensored news to us which is not published by other newspapers, this is valuable information to all Sri Lankans. However to make sure that this is read by all Sri Lankans, why don't you print a newspaper every week where any citizen of Sri Lanka will have access to ? People will then realize what they have undergone, moreover please make sure HE the President gets a copy of your news whenever it is updated. Thank You
-- by azad on 2015-05-22